Sebastien Ogier praised his M-Sport Ford World Rally Team after sealing a second World Rally Championship title in a row with the squad before he moves to Citroen next year.

He and co-driver Julien Ingrassia - who has been alongside Ogier for all six of his WRC titles, four with Volkswagen - finished fifth on the event and won the title in dramatic fashion.

Ogier edged out Thierry Neuville and Ott Tanak in a final-round thriller on Rally Australia.

Both his rivals made mistakes on the final loop of the New South Wales stages on Sunday, leaving the Ford Fiesta WRC driver to attack and win the final stage of the event safe in the knowledge that the title was confirmed regardless of his result.

"I am feeling so proud of my team," said Ogier. "You are the best!"

Ogier was informed he was world champion shortly before the final stage.

"I have to say, it was a little bit mixed feelings to find out on the road section this way," he said.

"This season has been so intense, but then I drove the last stage and had one last push in this car."

Ogier moves to Citroen ahead of next year and added: "I hope I'm not going to miss this car!"

Hyundai's Neuville congratulated Ogier and says he is already looking forward to continuing the fight next year. 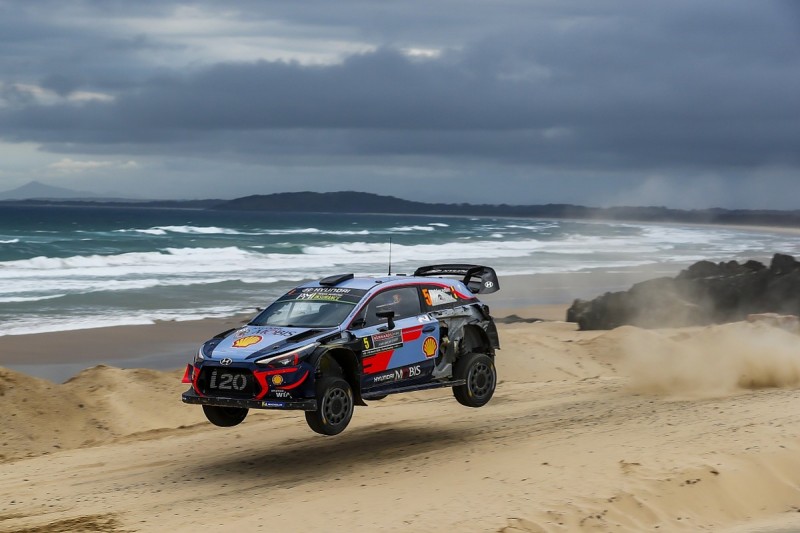 The Belgian crashed out with two stages remaining. He needed to beat Ogier to win the title but was two places behind - after a puncture and clipping a chicane on Friday - when he took the left-rear wheel off his i20 Coupe WRC.

"This was not the end we were looking for," said Neuville.

"Since the puncture on Friday it became really difficult running first on the road.

"But we kept going and we kept believing that the title was possible, but then came the rain.

"It was all or nothing, we had nothing to lose, so I pushed hard to make a gap. In the afternoon loop we drove over the limit and I crashed the car - that's part of the game.

"The first [impact came because the road] was really slippery.

"I came very fast, went wide and then I broke the first gear.

"I was disturbed by this and couldn't see over the crest, then I went too fast and hit a tree stump."

He added: "It's been a great season and congratulations to Seb and Julien [Ingrassia, co-driver].

"And thanks to my team.

While Toyota sealed a first manufacturers' title since 1999 with Jari-Matti Latvala winning the event, Ott Tanak's title bid ended on the penultimate stage.

He touched a tree and had gearbox damage in his Yaris WRC.

Toyota's Latvala had 'given up' on winning a 2018 WRC rally