Nasser Al-Attiyah is expected to drive a Toyota Yaris on selected rounds of this year's World Rally Championship, starting with Rally Argentina in April

Al-Attiyah, who finished second on last month's Dakar Rally in a Toyota Hilux, is closing on a commercial deal for this year's WRC.

Toyota team principal Tommi Makinen has confirmed his Puuppola-based firm is preparing a fourth Yaris for up to six WRC rounds this year, although Qatari Al-Attiyah will not form part of the official team.

"We continue discussing with Nasser. It's not decided yet, but we have prepared to be ready for Argentina," Makinen told Autosport.

"He is a private driver. It wouldn't be a fourth official car, but we would prepare and run his car.

"We [will] try to have his car next to our cars in the service park, this would help us with the logistics and the support needed."

Makinen said the specifics of Al-Attiyah's programme were still being finalised.

"It is five or six rallies we are talking about, starting with Argentina and then Portugal and Sardinia and some more," he said.

"It would be good to have Nasser with us, from the commercial side and for his experience.

"Is he the fastest driver, I don't know, but he knows what he is doing in the sport."

Al-Attiyah has started 73 WRC rounds, and has a best result of fourth place that he scored as part of the Citroen team on Rally Portugal in 2012.

He has not taken part in the WRC since he clinched a second WRC2 title in 2015. 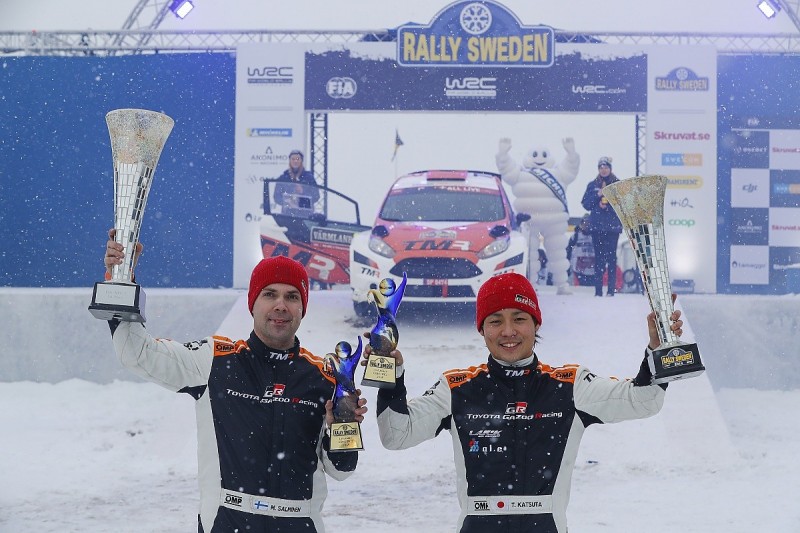 Takamoto has been part of Toyota's Rally Challenge Program for the past two years.

The Japanese driver, who regularly competes in a Ford Fiesta R5 as part of the TGR junior squad, led WRC2 for all but one stage last week and defeated defending class champion Pontus Tidemand and his Skoda team-mate Ole Christian Veiby.

Makinen said a Yaris WRC drive had always been on the horizon for Takamoto, but it could be brought forward after what he described as a "brilliant" drive from the 24-year-old.

"The original plan and most natural place would be Rally Japan in 2019, if this is going ahead," said Makinen.

"But you never know - if we can do something else, something sooner, then let's see.

"It was an absolutely brilliant drive. This was the rally that built his confidence for himself.

"We have known he is doing well in the test and his co-driver [Marko Salminen] has been with many fast drivers and he told us it's no question from driving skill, it's only a question of his trust for himself."

As well as some asphalt rallies in Italy, Takamoto will contest the remainder of the European WRC rounds with the exception of Rally Germany.