Andreas Mikkelsen is back in Hyundai's World Rally Championship line-up for Sardinia this weekend, but his programme for the rest of the 2019 season remains uncertain

Hyundai went into the campaign intending to run Thierry Neuville and Andreas Mikkelsen at every round, with Dani Sordo and Sebastien Loeb alternating in the third car.

But it has dropped Mikkelsen for two of the last four rallies.

Team principal Andrea Adamo is leaving his options open regarding what to do with Mikkelsen beyond Italy.

"My plan is to have him with us from Sardinia onwards," Adamo told Autosport.

"But my plan was also to have him from Monte Carlo onwards."

Asked if Mikkelsen would stay in the car for the rest of the year, Adamo replied: "I don't like to lie, I don't want to lie, so I prefer to not say anything.

"I tried to have the best of my people. I don't know much about football, but I know the best teams use their best players."

Hyundai faces a driver dilemma for Rally Finland, the first round after the upcoming summer break, with Sordo and Loeb reluctant to contest it and the concerns over Mikkelsen's form. 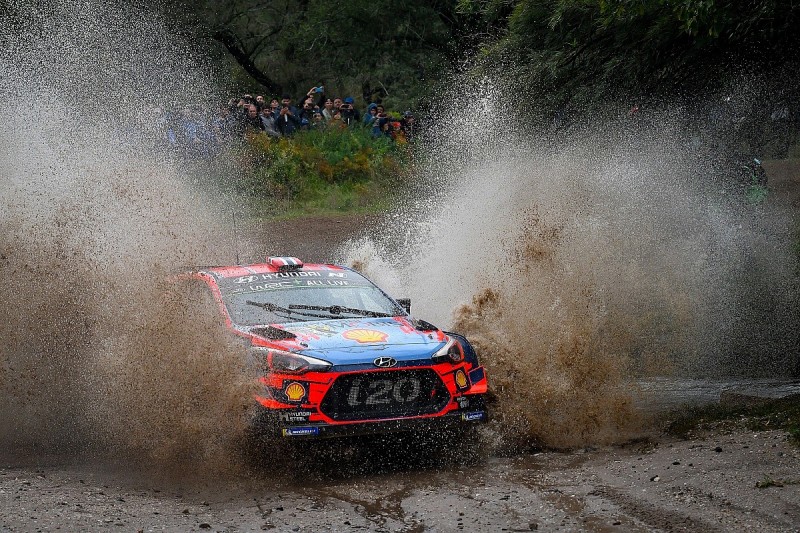 The team's former junior driver Jari Huttunen is getting runs in the i20 Coupe World Rally Car on two Finnish national events, but Adamo said he was unlikely to get a Rally Finland shot.

"We are letting him get used to the car, this is why he did [Riihimaki Rally in Finland] and to test some parts for us," Adamo explained.

"If I have this opportunity then I will use it. If you ask me if he could be in the third car for Finland then I would say I don't think so at the moment."

Finland has been a weak event for Hyundai historically, with the i20 yet to finish on the podium there.

"For sure the car has shown some good progress, but we still have issues where the terrain has not so much grip and Finland is a place where the roads are slippery. We are working on this.

"I have drivers like Neuville, who has been in Finland many times. Maybe he won't be so competitive as [Ott] Tanak or [Kris] Meeke or maybe [Jari-Matti] Latvala in the Toyotas.

"But come on... it's Neuville! We never yet gave them the proper car to be competitive in Finland.

"We're working for this. I don't like to point the finger at the drivers and ask, 'Could they?'. Actually, could we?"