Sebastien Ogier is confident a change in fortunes in this season's World Rally Championship will allow him to reel in Toyota team-mate and current leader of the competition, Elfyn Evans.

With two rounds remaining - the Ypres and Monza rallies - Ogier is still in the hunt for a seventh WRC drivers' crown after trimming Evans' lead to just 14 points following the recent Rally Italia Sardinia.

After struggling with his road position on the Friday, the Frenchman was much happier with his times over the subsequent two days and eventually finished third.

He also collected three bonus points on the closing power stage, his time bettered only by the Hyundai i20 Coupe WRCs of Ott Tanak and Thierry Neuville respectively.

"I wouldn't say it was a frustrating weekend - it was a good weekend for us, where we gave it all and our level of performance was good," he explained.

"But for sure, the final result doesn't show enough [of our effort], but it is still positive.

"We reduced the gap to Elfyn by four points which, of course, is important, and with two events remaining I believe that we still have a strong chance to win the title.

"For me, the weekend was a strong one. I did everything I could starting second on the Friday.

"I knew it was never going to be easy, cleaning the stages for 40 per cent of the rally. That cost us a lot of time. 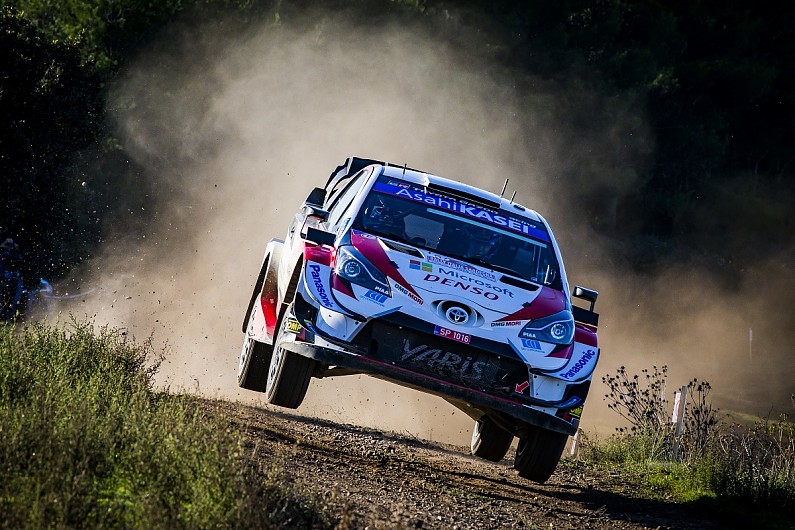 "But, after that, we were the fastest ones, we won a lot of stages and that is the positive I want to remember.

"The last two rallies we were pretty fast and I started to feel better and better in the Yaris."

A strong result in Sardinia was important after Ogier retired towards the end of the penultimate stage of Rally Turkey with engine woes - a setback that led to team boss Tommi Makinen apologising to him.

"I feel at the moment that a little luck would be nice, but that's part of the game, part of the sport," said Ogier.

"But I know every champion would like luck with him; I certainly had some at some point in my career [but] right now it's a bit harder but I'm taking it in a cool way and remembering the positives.

"The performance is there - we lost very close to Thierry [in Sardinia]. We tried everything - I was driving pretty much in the limits all [of Sunday] morning but those stages are always strong ones and it is hard for us to make a difference.

"So that's the way it is, but still some positive about the points, because we would have loved to catch more points but still 14 is better than nothing," he added.

Meanwhile, organisers of this weekend's Hemicuda Rally in Belgium have confirmed that both Ogier and Evans will take part as a warm-up for Rally Ypres as neither driver has any experience of the Tarmac classic.