Looking for his first WRC podium finish since joining Hyundai this season, nine-time champion Loeb had been on a charge and went 13 seconds faster than anyone else across Saturday's six stages.

Loeb then took another four seconds out of Ogier in their battle over second place on the Sunday morning pass of Bio Bio, which will be re-run as the powerstage to end the rally later in the day.

But Ogier mounted a stunning comeback on the longest stage of the final leg, the 11.22-mile Lircay test, going fastest by 4.2s from Loeb to recover all the time lost on Bio Bio and a little more.

That gives Ogier an advantage of 4.6s over Loeb going to the powerstage.

Loeb admitted he had been "hesitant" on his run, with Sunday's stages featuring very fast but much narrower roads than previous days.

Though Loeb bounced back with fastest time on San Nicolas, he was only able to recoup 0.7s to Ogier.

Such was the pace of the two Frenchmen behind him, his lead gap has now fallen to 21.8s - down from 30.3s overnight. 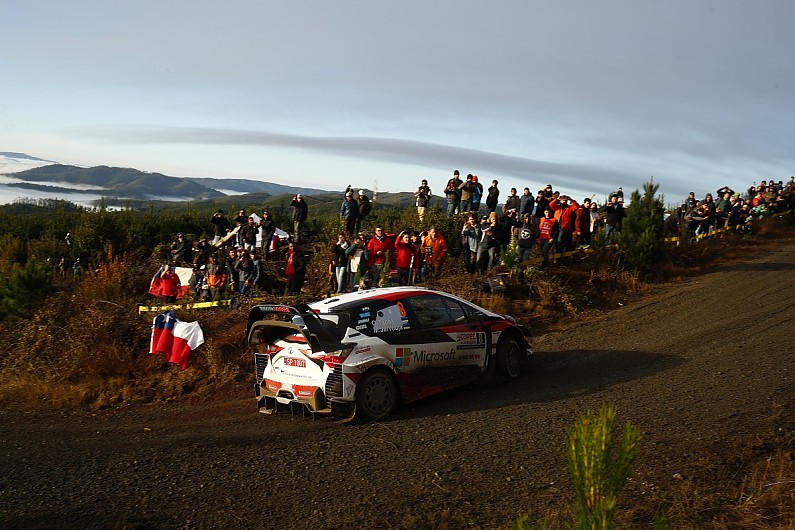 Elfyn Evans made no attempt to keep up with Loeb ahead of him, admitting he had "nothing to fight for".

M-Sport's lead driver is now over a minute behind Loeb in fourth place but in turn is over a minute and a half ahead of fifth-placed team-mate Teemu Suninen.

Suninen began the loop with Esapekka Lappi still within striking distance but the Citroen driver continued to bemoan the low grip conditions denting his confidence, with Suninen keeping him pegged at 10s behind.

Lappi's sixth is now a comfortable one, as the second Hyundai of Andreas Mikkelsen fell even further adrift in seventh, 1m11s behind.

WRC2 Pro leader Kalle Rovanpera's eighth place is under threat from Toyota's Kris Meeke, who is still playing catch-up after losing several minutes with a roll on Saturday morning.

Rally2 returnee Jari-Matti Latvala passed M-Sport WRC2 Pro driver Gus Greensmith for 11th on San Nicolas but is unlikely to make it into the points places, with over three minutes to Ostberg.

WRC2 had featured a tightly contested battle for victory between Toyota protege Takamoto Katsuta and Chilean driver Alberto Heller, until Heller crashed on Lircay and gave Katsuta a comfortable gap over Benito Guerra.