Ott Tanak continues to lead his World Rally Championship rivals on Rally Chile, though his Toyota team-mate Jari-Matti Latvala retired from third and moved Sebastien Loeb into the podium places.

Second-placed Sebastien Ogier gained 4.3s on Tanak over the afternoon loop by taking a different tyre strategy from the rest of the field.

Ogier used a pair of medium tyres to good effect by winning SS10, while everyone else had taken a full complement of hards.

Though Tanak responded with a stage win on Maria Las Cruces, Ogier was still quicker than Tanak on the final stage of the day, as rain and fog intensified as each car passed through the Pelun test.

The pair are now separated by 30.3s with four stages on Sunday remaining.

Latvala had been close behind Ogier in third place after regaining 12.5s from a notional time awarded for SS7 earlier in the day, having been held up by team-mate Kris Meeke who had rolled.

But instead of challenging for second, Latvala was being chased down by Loeb - who was the best placed Hyundai after Thierry Neuville's huge morning crash.

Latvala's rally then ended on Pelun, when he hit a rock in a ditch and damaged a front-left driveshaft, which forced him to pull over and retire. 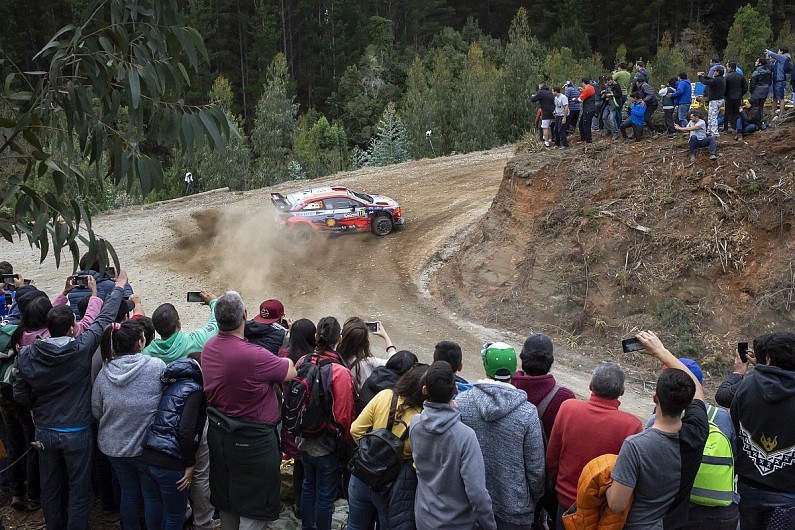 That promoted Loeb to third. He managed to take 11s out of Ogier by running earlier on the road and avoiding the rain and fog that hindered his compatriot, reducing the overall gap to 5.1s.

Elfyn Evans is up to fourth place but progressively fell away from Loeb during Saturday, finishing the day half a minute behind having been as little as 11.1s off the Hyundai halfway through the morning.

Evans's M-Sport team-mate Teemu Suninen is locked in a battle for fifth place with Esapekka Lappi.

Suninen initially pulled away by beating the Citroen driver by nearly 10s on Rio Lia, only for his hard work to be undone on Pelun when he dropped a similar amount of time.

Now well behind sixth-placed Lappi is Andreas Mikkelsen, who took a very steady approach and finished half a minute adrift of the second Toyota in seventh.

WRC2 Pro leader Kalle Rovanpera is eighth for Skoda, 36.1s up on works Citroen driver Mads Ostberg who is second in class.

Kris Meeke is back in a points-paying position thanks to his team-mate's demise on Pelun, moving up to 10th in his recovery drive from rolling on the morning pass of Rio Lia.

Only 12.6s separate Meeke and Ostberg, who is driving a less powerful R5 specification car.