Citroen insists it still 'trusts' its struggling World Rally Championship driver Esapekka Lappi after his Rally Argentina crash and he has its full backing.

The 2017 Rally Finland winner's tough start to life alongside Sebastien Ogier at Citroen continued last weekend with a Friday crash that has forced his team to fly a new chassis from its Paris base to Santiago in time for next week's Rally Chile.

Bar a second place in Sweden, Lappi has struggled to find his feet with the C3 WRC.

He spent much of Mexico in March talking about a nightmare lack of grip, managed only one top-four time in Corsica and then rolled out of Argentina on the Friday afternoon.

Citroen team principal Pierre Budar acknowledged that "of course it's disappointing" but made clear Lappi would be given time and help.

"Maybe he is short of experience still, but we still trust him and we need him to be back and fully confident in himself.

"We are working for him to be better and better. I am quite sure he can learn a lot from Seb, he is young and a good guy and this is a good opportunity for him and one we have to play to the maximum."

Teams had been anxious to avoid sustaining heavy damage to cars in Argentina because it effectively runs back to back with the WRC's first visit to Chile.

"It's not optimal, but we had no choice if we want to compete in Chile - this is what we have to do," said Budar of flying a new chassis out.

"We always planned to have the third car ready [at the factory in Versailles] and now we'll bring it, the car will be flown out and we receive it directly to Chile." 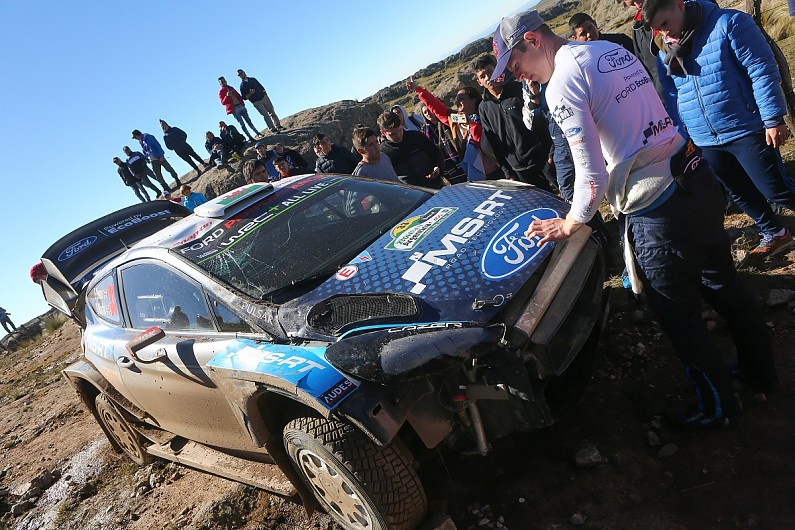 M-Sport was relieved to avoid a similar situation once it assessed the damage to Elfyn Evans's Ford from his Saturday crash.

"But once we got the car stripped down, we could see it would be OK.

"It'll take some work, but the chassis will be straight. We can do all of that work ourselves here in Argentina.

"OK, it'll not be absolutely perfect like we'd done a brand new car back in the factory, but he'll not notice.

"The front-right corner took the brunt of the impact, but we can sort all of that. There was no damage to the cage.

"In fairness, we had the car prepared and ready in M-Sport, we were ready to get it on the plane, but there's no need."