Ex-Citroen and Ford World Rally Championship driver Mikko Hirvonen says he has "never had so much fun in a rally car" after contesting the West Cork Rally in Ireland.

Hirvonen won the national section - for non-homologated cars - of last weekend's rally, which was won outright by another ex-works Citroen driver, Craig Breen, who drove a Ford Fiesta R5.

The modified class Hirvonen contested is one of the most popular in Ireland, and is dominated by lightweight variants of the Escort Mk2 that Hirvonen drove, fitted with 2.5-litre Millington engines and sequential gearboxes.

"It was a fantastic weekend, never mind the result," said Hirvonen, who was 16th overall.

"I want to thank everyone for making it possible, I never had so much fun in a rally car."

When asked if he would be returning to Ireland, he replied: "If the opportunity comes." 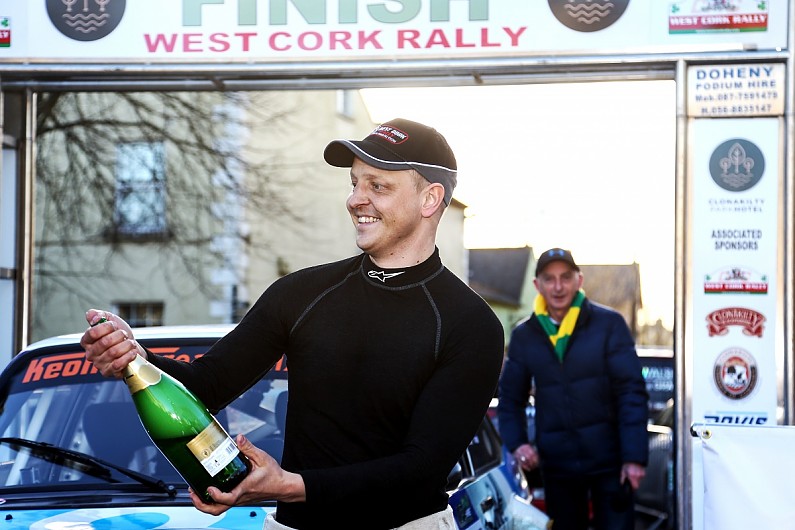 Hirvonen, an Escort Mk2 enthusiast, had discussed competing on an Irish event with current Ford Performance Europe senior manager Gerard Quinn, who has been a member of Cork Motor Club since the early '80s.

The pair spoke about an outing as far back as when Ford was still a full WRC entrant in the early '10s, and while Hirvonen was still with the team.

"We tried to make it happen in 2018 but Mikko had another commitment, and at that point I thought it wasn't going to happen," said Quinn.

"I asked him who was sorting that out and he said, 'I think you'd better sort it out!'. That's how it started. Fortunately he gave me enough time.

"I could tell he was apprehensive [before the event] but after the first test he opened the door with a huge smile and said, 'Bloody hell, this weekend is going to be expensive'.

"I said, 'I hope it's not because you're going to cause damage', and he replied, 'I think I'm going to be buying one of these cars'."

Quinn is hoping Hirvonen will return to the event next year as he has won a free entry, and still has to collect his trophies.

Increased spectator numbers were attributed to Hirvonen's presence, with Finnish flags raised in his support throughout the route.

The event was also part of the British Rally Championship for the first time, with Tom Cave's third overall enough to give him maximum points.

After Cave's retirement on the first round, reigning champion and M-Sport Swift Rally Team driver Matt Edwards leads by 17 points.

Breen extended his lead at the top of the Irish Tarmac Rally Championship with his outright victory.