Hyundai team principal Andrea Adamo says his decision to bench Andreas Mikkelsen was based solely on fielding the strongest World Rally Championship squad possible for the Tour of Corsica.

Mikkelsen was originally scheduled to contest the complete WRC season with Hyundai - with his management team going to great lengths to ensure every aspect of his contract was observed. The team has often rotated its driver line-ups during recent seasons.

Hyundai recently announced that Mikkelsen would not be in its entry for round four in Corsica, where it will run Sebastien Loeb and Dani Sordo on the asphalt event alongside team leader Thierry Neuville.

Knowledge of Mikkelsen's contractual stipulations meant that news was met with widespread surprise in the WRC, even though an insider at one rival team said parking Mikkelsen was a "no-brainer" given the options at Hyundai's disposal.

Adamo told Autosport: "I am paid to take decisions and I take decisions. I have to make the best for Hyundai and looking at the drivers and crews Hyundai has, it's easy to see that, on paper, Loeb and Sordo and Thierry are the strongest guys on Tarmac that we have.

Instead of competing in Corsica, Mikkelsen will complete gravel testing in preparation for new homologation parts coming to the i20 Coupe WRC later in the season.

"I thought the best opportunity is to ask Andreas to focus on the gravel test," said Adamo, pictured below.

"This is really important to the team, we are homologating new parts from this test. 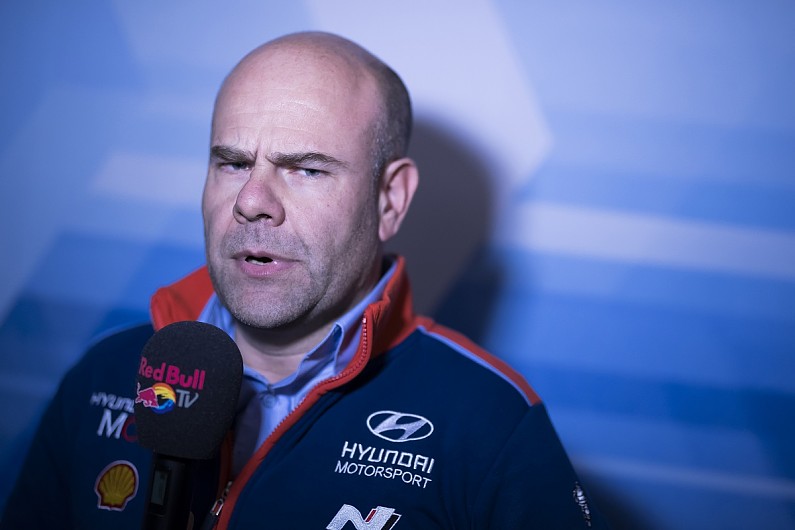 "I'm lucky that I have enough drivers to make this choice and I think a lot of people would like to be in my shoes to manage four crews who are so strong."

Adam insisted that Mikkelsen and his co-driver Anders Jaeger understood Hyundai's reasoning and were happy to be entrusted with the important test instead, despite their contract stipulating all 14 rallies.

"Everybody is seeing this on the cloudy side, but they see the sunny side, because they understand that I trust them a lot to use them for this test on gravel," he said.

"I spoke to them after their Mexico pre-event test [last week] and they were very focused on this.

"It's not a matter of how many rounds you do or not and I won't disclose what is written in the contract.

"I like to read books and I read once where it was written that the truth makes you free.

"I explained clearly my point of view and the reasons behind. Andreas and Anders are clever and professional guys, they more than understood and they will be more than focused to help Hyundai win the manufacturers' championship doing the thing that I asked them to do."

Adamo said no decisions had been taken about plans for asphalt rallies later in the season.

Mikkelsen is still searching for his first podium with Hyundai, which he joined in late 2017.

He was in the top three fight at both events so far this season, but crashed in Monte Carlo and faded to fourth in Sweden.