Hyundai team principal Michel Nandan has denied that the decision to delay the arrival of its new i20 World Rally Championship challenger is budget-related, and says it will be ready to win from the outset.

There had been speculation that cashflow restrictions were at the bottom of the Frankfurt-based squad's decision to deliver its new car in 2016, rather than this season.

One source close to the team said: "I don't think there's any doubt about the budget being in place and the scale of the budget, but there has been some talk about the way and the speed the cash is flowing from Korea to the team in Germany."

"This decision is in no way related to the team's budgetary situation and relates exclusively to a homologation issue caused by the road car production schedule," he said.

Development was advanced on a three-door coupe i20 WRC, however AUTOSPORT understands just 7000 of the necessary 25,000 road-going units have been built, forcing Hyundai to instead puts its five-door car forward for homologation.

Testing on the three-door started last September, however Nandan said that design and development work on the project was far from wasted, and that the extra six months Hyundai will now spend on the new challenger would ensure it's ready to win from the outset.

"So quite a lot will be carried over - it's the same platform. Mechanically it's identical, we'll just have to work on the bodyshell.

"It will be quicker when it comes out. We have more time for testing now, so we can work on the car to refine it more." 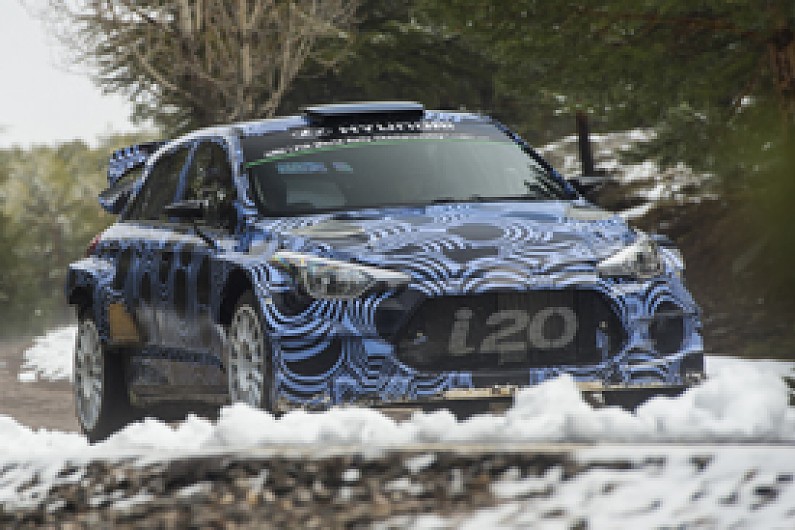 Hyundai's all-new i20 WRC will run for the first time at January's Monte Carlo Rally, but it will only compete for one season before new technical regulations arrive in 2017.

Talking about the investment required for a single year, Nandan said: "That's one of the bad things about the decision.

"It means we make a big investment for one year, but, OK, we can't change anything about this. It's still possible to run the 2016 World Rally Car in 2017, but I don't think this is in our spirit."

Hyundai had always been in the position of having to build and develop three cars in four years, but the original plan was for last year's original i20 to be replaced this season and the new car coming in 2017.

Nandan added the direction of the 2017 regulations would help Hyundai.

"The manufacturers are all on the same level and in agreement on the point, to keep the [2017] regulations allowing us to keep as much [of the current car] as possible," he said.

"For sure, this would help us as the difference from next year's car to the 2017 car will not be so big and we will be able to carry over some of the 2016 parts."