X Games gold medallist Doran and Harris have bought the three Minis from JRM Racing, and Doran's LD Motorsports team will develop them for the 2018 season, using a two-litre engine.

Concrete plans are yet to be finalised for 2018, but the team is open to running the Minis in World, European and British Championship events, or could sell or rent them out.

"Liam and I have gone in on this together," said Harris.

"He believes in the cars and I believe in Liam.

"Whether we sell them rent them or have a bit of fun in them, I believe they will be incredibly fast."

Doran was the first driver to use the Prodrive-built Mini, derived from the World Rally Car version, in rallycross in 2013 and won X Games Munich in it.

JRM then bought the Mini RX programme in late 2014, and after a part-season the following year it launched a full world championship campaign with Doran driving in '16. 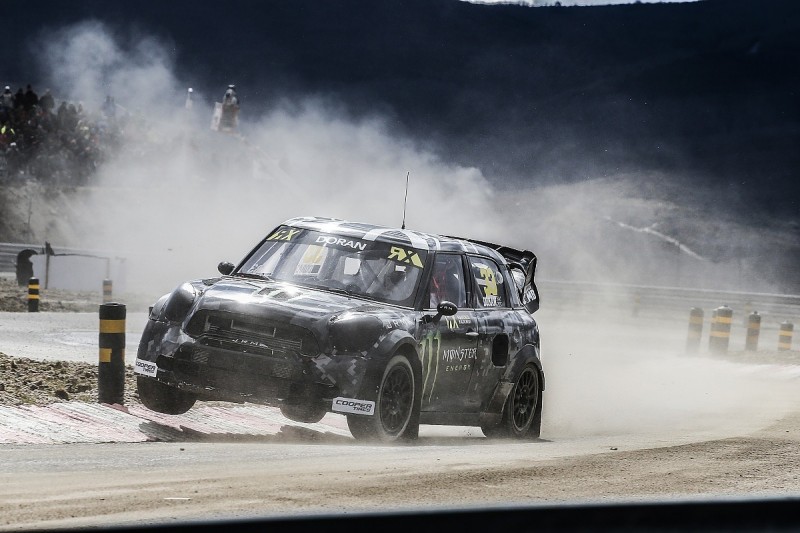 Though Doran won a semi-final at Hockenheim, he split with the team mid-year as JRM worked through developing a two-litre engine to replace the WRC-based 1.6-litre unit and experienced a number of issues.

"I know what these cars are capable of, I look at the Mini as my most successful car," Doran told Autosport.

"It's beautiful to drive, look at Hockenheim in 2016. There is some unfinished business."

JRM completed the 2016 season after Doran's exit, with Wilks among the drivers, but the Mini did not appear in World RX at all this year.

LD Motorsports is planning a number of upgrades to the cars, with developments centred around the engine. A Julian Godfrey-built custom unit is likely to be used.

"It's what should have happened when I was driving the car for JRM," said Doran.

"The car was never the issue. The Mini is a great chassis and I'm confident it's going to turn heads; I'm a big believer that drivability of a car is what makes it fast and consistent."

This season, LDM ran four Citroen Supercars in the British Rallycross Championship, Nathan Heathcote winning the series in a DS3.

The team will continue to run its Citroens and is expanding its Devon facilities.

Having spent a year on the sidelines in 2017 due to license suspension, Doran may also return to the wheel himself for some selected World RX appearances next season.

"Nothing is for sure yet," he said. "I would love to get back behind the wheel, but we're focusing on the team right now.

"I want to get in the Mini and show everyone what it can do."