Andreas Bakkerud leads after day one of the AUTOSPORT World RX of Great Britain at Lydden Hill, round two of the World Rallycross Championship 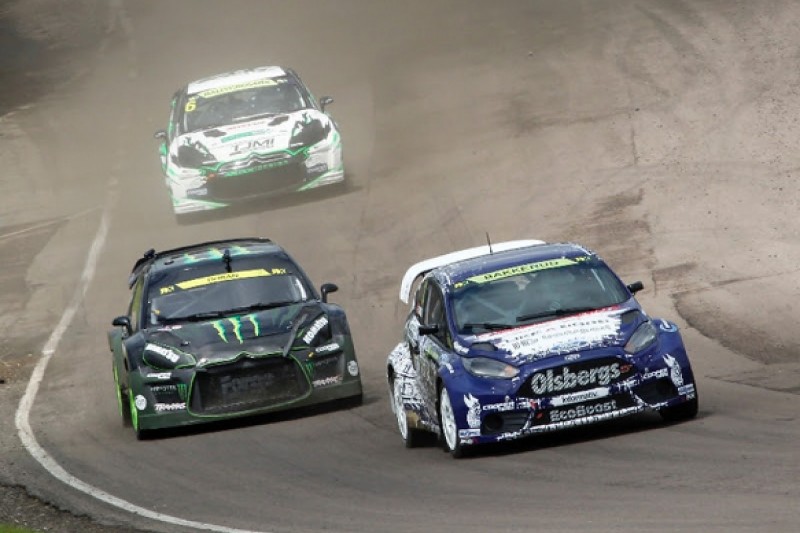 Bakkerud, twice a winner in the 2013 European championship, was fastest in heat one and finished sixth in heat two.

However, the round one winner is back in fourth overall after a startline stall in heat one left him only able to set the 12th fastest time.

Swedish driver Robin Larsson provided the surprise of the day.

Making his international Supercar debut in a new Audi A1, he was fifth in heat one and third in heat two to lie fifth overall at the end of day one, ahead of the Peugeot-Hansen pairing of Timur Timerzyanov and Timmy Hansen.

Reigning British Touring Car champion Andrew Jordan is making his return to rallycross on his 25th birthday and sits in eighth position, well inside the qualification positions for the semi-finals if he can maintain that position after the final two heats on Sunday morning.

Fellow Brit Liam Doran failed to make amends for his troubles at round one of the series, a jump start in heat one forced him take the penalty of doing two joker laps.

Doran looked set for a quick time in heat two before being slowed by mechanical gremlins at the end his race. He is 29th of the 37-strong field overnight.

Debuting a new Hyundai i20 Supercar at Lydden, Norwegian Frode Holte completed his race in heat one but suffered an engine bay fire after the finish, leaving the car too badly damaged to repair before heat two.

Nelson Piquet Jr continues to find his feet in the category and is last in the nine-car field.