A month after winning his first World Rally Championship round for six years in Spain, Sebastien Loeb topped the opening day of the World Rallycross Championship finale in South Africa

Competing in Peugeot's final World RX round as a works entrant, Loeb was fastest in Q1 on the Killarney circuit.

He remained at the head of the standings at the close of the day despite dropping positions from pole position in Q2 following a first corner battle and only setting the sixth best time.

Champion Johan Kristoffersson and team-mate Petter Solberg had been in danger of missing the event when their PSRX Volkswagen team's cars and equipment were delayed in transit.

But with the kit having been delivered late on Friday afternoon, Solberg was best of the VW drivers in Q1 with fourth, then completed a one-two behind Kristoffersson in Q2 to end Saturday in second behind his long-time WRC rival Loeb. 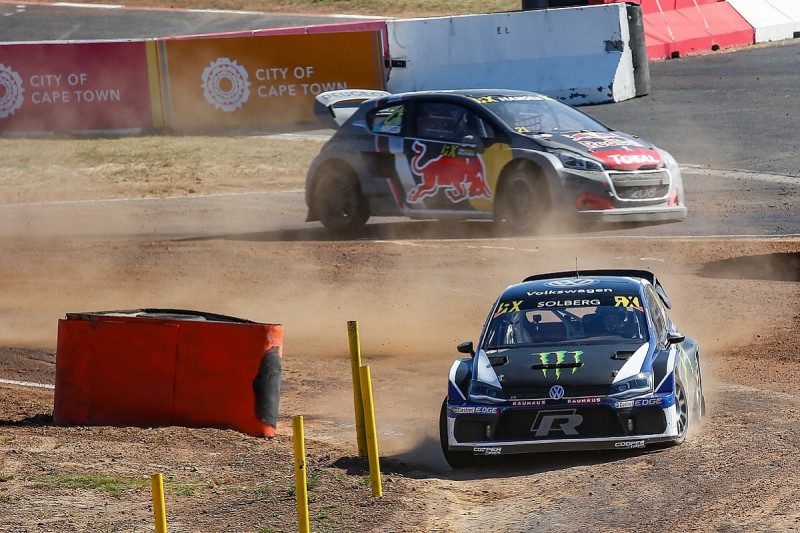 Kristoffersson suffered a technical problem in the opening session that caused a spin on the second lap of his race. Although he did finish, he was 16th and last of those that chalked up a time.

But in Q2 Kristoffersson cleared Munnich Motorsport drivers Timo Scheider and Rene Munnich by the first corner of his race and ran in clean air to stop the clocks first and climb 10 places up to sixth.

A mistake in the joker lap section on the final lap of his Q1 race meant Peugeot driver Timmy Hansen was unable to better his colleague Loeb's time in Q1, and like Loeb he was then beaten to the first corner by a fast-starting Solberg in Q2.

Mattias Ekstrom was fastest in free practice but had to battle in traffic in the opening corners of both of his races and wound up fifth at the end of the day.

His EKS Audi team-mate Andreas Bakkerud ended up one place better. Bakkerud was third in Q1 thanks to gaining positions at Turn 1 then beat Loeb as the joker laps played out in Q2.

Driving for Manfred Stohl's STARD team, Janis Baumanis was fifth in Q1 and ended the day eighth overall, sandwiched between Peugeot driver Kevin Hansen and Anton Marklund - who is making his third appearance for the GCK Renault squad.