Toyota secured a one-two finish in the opening round of the new FIA World Endurance Championship superseason at Spa, with Fernando Alonso's car taking a narrow win

The #8 TS050 Hybrid Alonso shared with Sebastien Buemi and Kazuki Nakajima looked to be on course for an untroubled victory for the majority of the distance, helped by the sister #7 car being forced to start from the pitlane.

By the time the #7 Toyota had recovered to second place in the third hour, the #8 car was the best part of a minute ahead, despite Nakajima having to make an extra pitstop for his seatbelts not being fastened correctly and then spinning at La Source shortly afterwards.

The two Toyotas circulated around a minute apart until a late safety car period was caused by a big crash for Matevos Isaakyan in the #17 SMP Racing BR1-AER at the top of Eau Rouge.

That bunched up the pack, not long after Alonso had taken over from Nakajima for the final double stint, and Mike Conway took the restart hot on the Spaniard's heels.

However, despite closing to within a second of the two-time Formula 1 champion at one stage, Conway never attempted a pass, and duly crossed the line 1.4 seconds behind Alonso, who claimed his first race victory since the 2013 Formula 1 Spanish Grand Prix. 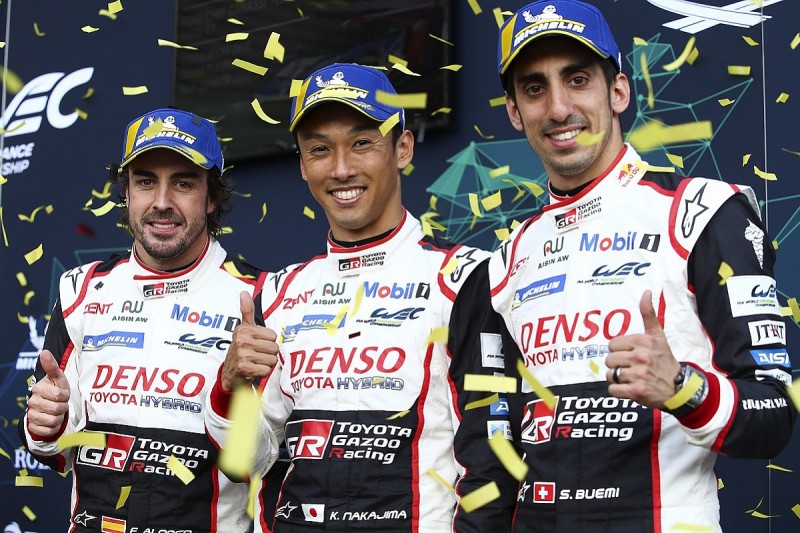 Rebellion Racing initially took third and fourth in the first race for its pair of new Oreca-built R-13-Gibsons, having emerged as clearly the quickest of the non-hybrid teams.

The #1 car of Andre Lotterer, Neel Jani and Bruno Senna survived two trips to the pits due to transponder issues to take the final step on the podium, two laps down on the Toyotas.

But they were later excluded owing to an overly worn skid block, which was found to be 1.2mm under the tolerance permitted by the rules.

Thomas Laurent, Gustavo Menezes and Mathias Beche took fourth in the #3 car on the road but were promotted to third. They had been battling the #17 SMP entry for the final podium spot until Isaakyan's crash.

The ByKolles ENSO CLM P1/01-Nissan shared by Tom Dillmann, Oliver Webb and Dominik Kraihamer took a distant fifth, a further three laps back on the Rebellion pair, while the #11 SMP car of Mikhail Aleshin and Vitaly Petrov was last of the LMP1 finishers in sixth. 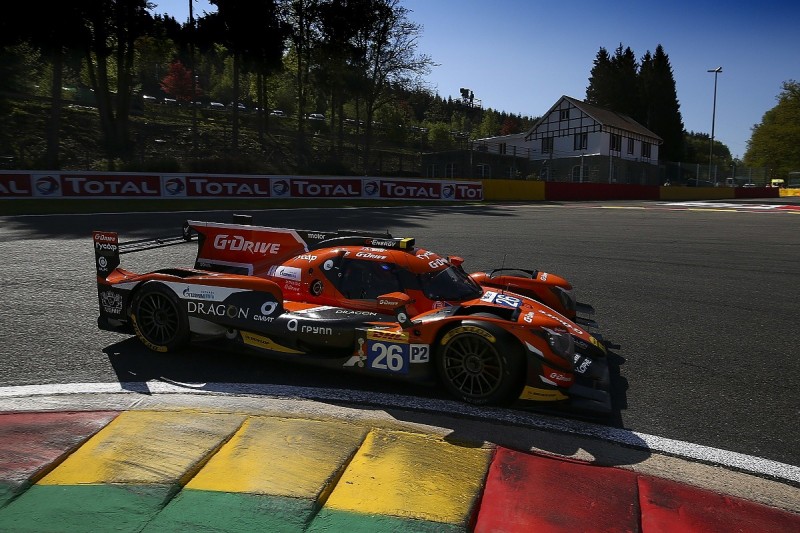 The #26 Oreca had held a lead of more than a minute before the safety car at the start of the final hour, and despite having that advantage heavily reduced Vergne was still able to finish 21 seconds clear of the opposition.

Jackie Chan DC Racing's #38 Oreca beat the #36 Signatech Alpine Oreca to second as Ho-Pin Tung jumped ahead of Andre Negrao in the final round of pitstops.

Pastor Maldonado finished sixth on his WEC debut in the DragonSpeed Oreca he shared with Nathanael Berthon and Roberto Gonzalez after being delayed by a brief stoppage on track and a drive-through penalty for pitlane speeding.

Giedo van der Garde enjoyed a spell out front early on in the race in the #29 Racing Team Nederland Dallara before his charge was halted by an alternator problem. 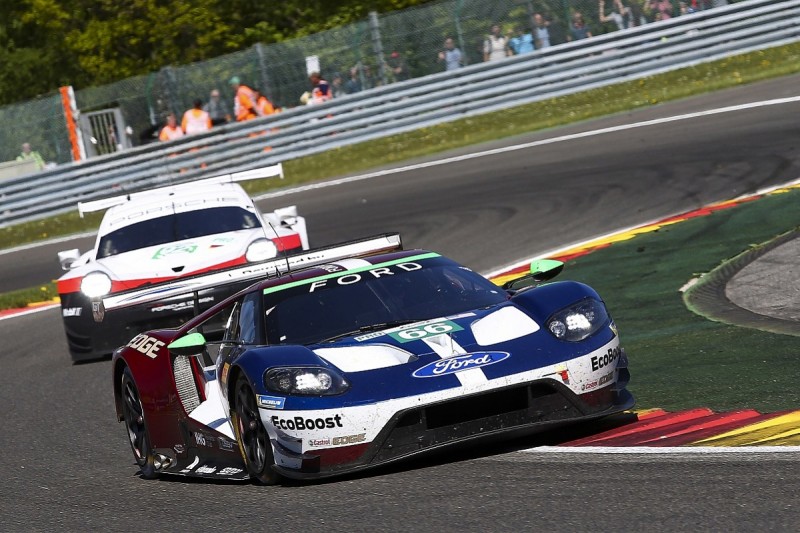 Tincknell was running second behind the sister Ford when he lost control and crashed head-on into the barriers at the end of the second hour, bringing out the safety car.

The Briton emerged unharmed, but the cause of the crash remains unknown pending a post-race investigation by Ford.

Tincknell's crash made it a three-horse race between the #66 Ford and the two works Porsche 911 RSRs, with Richard Lietz and Gianmaria Bruni having pulled out a 20-second gap in the #91 Porsche after Lietz passed Mucke for the lead in the third hour.

But Isaakyan's crash reset their fight at the start of the final hour, and Pla was able to get the place back and open up a gap to take a comfortable victory.

After being passed by Pla, Lietz was demoted a further place by Michael Christensen in the #92 Porsche the Dane shares with Kevin Estre, which went on to take second.

Lietz then continued to haemorrhage time, and after a late dogfight was beaten to third by the #71 Ferrari 488 GTE of Davide Rigon and Sam Bird.

The #51 Ferrari of James Calado and Alessandro Pier Guidi had been ahead of the #71 car until Calado got involved in a pitlane scrape with the #56 Project 1 Porsche of Egidio Perfetti that consigned it to the garage.

BMW finished fifth with the best of its new M8 GTEs on its WEC debut, while the new Aston Martin Vantages were sixth and seventh.

GTE Am victory by two-tenths 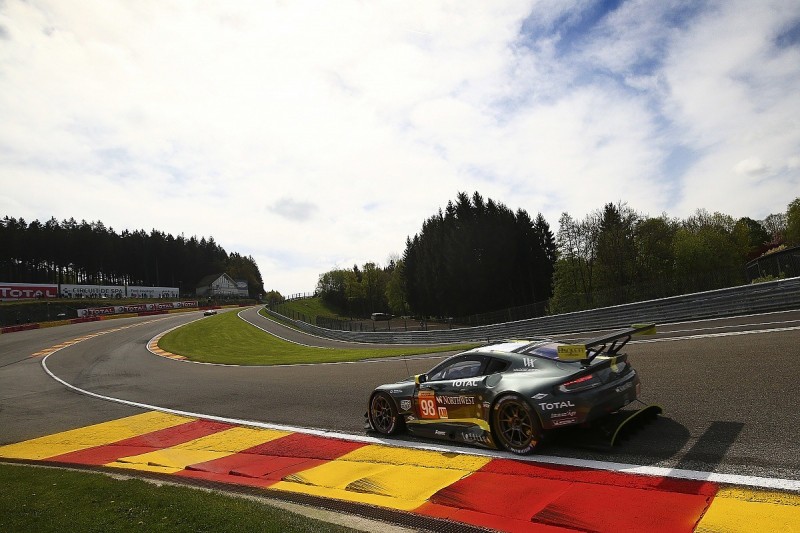 The GTE Am class was won by the #98 Aston Martin Vantage after Pedro Lamy fended off the #90 TF Sport Aston of Euan Hankey in a nailbiting finish.

A 35-second advantage for the works car was reduced to five by the final safety car, after which Hankey closed in and put Lamy under big pressure in the closing minutes.

The pair made contact at the Bus Stop chicane as they battled for the win, but Lamy held on to the win by just 0.221s at the finish in the car he shares with Mathias Lauda and Paul Dalla Lana.