Alpine took a maiden World Endurance Championship victory in the season-opening 1000 Miles of Sebring that was thrice red flagged due to a huge Toyota Hypercar crash and localised thunderstorms.

The planned eight-hour race ended in an anti-climax when severe weather moved into the area in the final hour.

Following the first red flag and 30-minute delay, while the barriers were repaired following a huge crash for the race-leading #7 Toyota of Jose Maria Lopez at Turn 15, the race went green with just over 3 hours and 40 minutes remaining.

The surviving #8 Toyota of Sebastien Buemi, Brendon Hartley and Ryo Hirakawa led at that point but had to take emergency service to avoid running out of fuel, and pitted on the following lap for another stop.

At the resumption, the Signatech-run Alpine led Glickenhaus by a lap, with the remaining Toyota dropping back to third. However, as the green flag flew, Ryan Briscoe in the Glickenhaus passed the sole Corvette C8.R GTE Pro car before the restart, earning a penalty.

After a second red flag for electrical storms in the area, although no rain fell, the race was scheduled to restart with a 36-minute dash to the finish – but with more rain threatening. After further electrical activity, the field was getting ready to restart when more lightning was detected nearby.

The chequered flag was waved with 14 minutes still on the clock as the heavens finally opened. The Alpine was declared the winner by 9.2s from the #8 Toyota and the Glickenhaus Briscoe shared with Olivier Pla and Romain Dumas.

The #23 United Autosports ORECA entry piloted by Paul di Resta, Oliver Jarvis and Josh Pierson didn’t pit when everyone else did, and won the LMP2 class in fourth overall ahead of WRT trio Robin Frijns, Sean Gelael and Rene Rast. 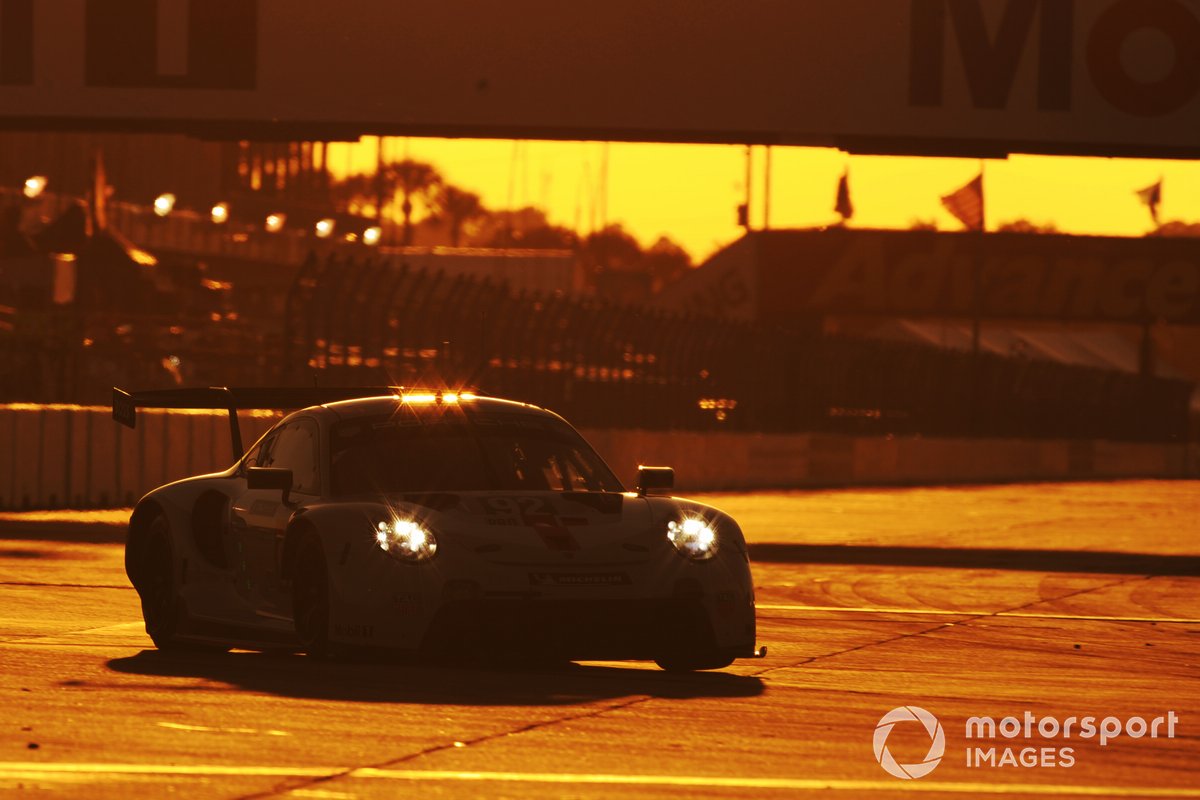 Kevin Estre and Michael Christensen won the GTE Pro class in the #92 factory Porsche 911 RSR by 1.4s from Tommy Milner and Nick Tandy in the sole Chevrolet Corvette C8.R.

After an entertaining battle between Porsche and Corvette over the opening hours, during which both Porsches were penalised for a startline infringement, Estre passed the Corvette following the first red flag on the run to the final corner.

The sister #91 car driven by Gianmaria Bruni and Richard Lietz looked set to make it a 1-2 for Porsche, but a jammed left-rear wheelnut hampered its cause as it finished third, over 9s in arrears of the Corvette. The factory Ferraris were off the pace all weekend and trailed home in fourth and fifth, with the 2021 title-winning #51 crew of James Calado and Alessandro Pier Guidi leading their team-mates Miguel Molina and Antonio Fuoco.

In GTE Am, the Northwest AMR squad of David Pittard, Nicki Thiim and Paul Dalla Lana won out ahead of the TF Sport Aston of Marco Sorensen, Ben Keating and Florian Latorre, and Team Project 1’s Porsche shared by Ben Barnicoat, Ollie Millroy and Brendan Iribe.