Jose Maria Lopez took full responsibility for the crash that caused the Sebring 1000 Miles race to be red-flagged and compromised Toyota’s chances of winning the World Endurance Championship opener.

Defending Hypercar class champion Lopez was trying to lap the #88 Dempsey Proton Porsche of Julien Andlauer during the race's fourth hour when they made contact, sending the #7 Toyota GR010 HYBRID into the barriers at Turn 9.

Lopez was able to return to the track on his own power and tried to limp back to the pits in his damaged car, but suffered a second crash later in the lap at Turn 15 and ended up upside down after a violent hit with the tyre barrier.

The Argentinian successfully emerged from the car on his own accord and was cleared by the doctors following a brief trip to the medical centre, but the race had to be red-flagged for over 30 minutes to allow marshals to repair the barriers.

It initially appeared that the second incident may have been caused by a technical issue, with smoke visibly coming out of the left-hand side of the Toyota, but Lopez admitted that he simply “misjudged” his speed in a bid to lose as little time as possible in returning to the pits.

"I went to the medical centre. They ran all the tests to see if there was nothing inside, sometimes the adrenaline makes you jump out of the car.

"But everyone did a good job. Thank you very much to the medics and everyone who checked me. [And thank you] to Toyota for the safety, it was a big one but I managed to jump out of the car, no problem.

"I'm just sorry to the team, it's completely on me. I just misjudged the speed at that point. 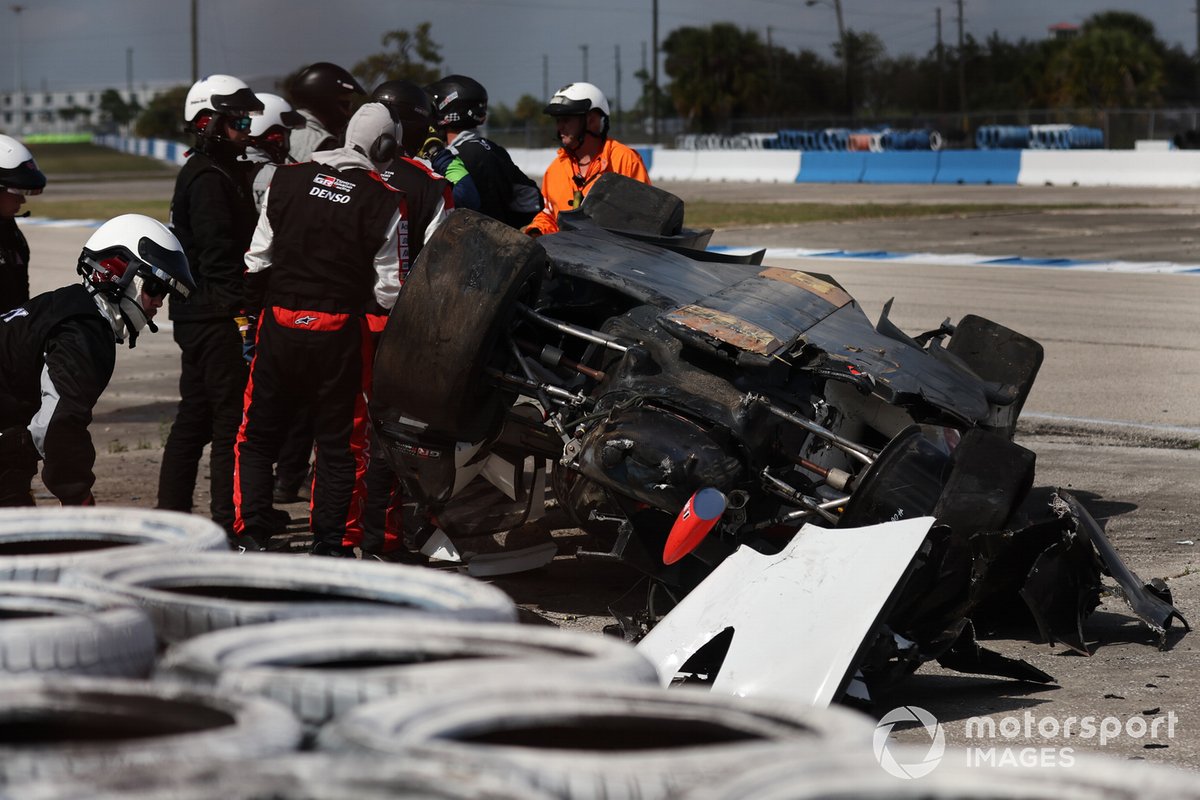 "I was trying to come back to the pits as quick as I can. With the speed, with the damage I had, the front nose went down.

"When I wanted to turn, I had no steering wheel or brakes and I just went off."

The red flag was deployed just a few laps before the #8 Toyota of Brendon Hartley, Sebastien Buemi and team newcomer Ryo Hirakawa were due to make their fourth scheduled stop from the race lead.

Hartley brought the car into the pits shortly after the race resumed under a safety car, dropping to third in class behind the pole-sitting Alpine A480 driven by Andre Negrao and Ryan Briscoe in Glickenhaus.

Alpine has dominated the proceedings on WEC’s return to Sebring so far, but was facing a pitstop disadvantage to its two Hypercar rivals due to a smaller fuel tank before the red flag.