One of Toyota's 2018/19 World Endurance Championship challengers was sent out of the pits with a front wheel missing during an endurance simulation at the Aragon circuit last month so that the team could learn how to deal with the situation should it arise in the race this June.

Toyota Motorsport GmbH technical director Pascal Vasselon said: "In Aragon we have done one lap on three wheels and asked the team to bring back the car.

"We have understood the additional problems you can get with the front differential, for example."

Vasselon explained that the team had already completed the same exercise, with a rear wheel removed at a previous test.

Toyota has been exploring an array of problems during its endurance simulations in order to be as prepared as possible for the kind of exceptional circumstances that deprived it of victory at Le Mans in 2014, '16 and '17.

"We did not need as much mileage as the year before, so we have sacrificed mileage to train the team to handle fake problems," Vasselon said.

"The target was to train the team to handle the unexpected and it worked quite well.

"The exceptional now is not so exceptional, but obviously the adrenalin and stress you have during the race will trigger additional difficulties."

As many as "20 to 25" different issues have been simulated by Toyota so far this year, according to Vasselon.

These have included surprising the driver by ceasing all radio communication on circuit and simulating driveshaft failures.

Vasselon also revealed that the turbo issue that cost Toyota Le Mans victory in 2016 with six minutes to go would not have been an issue one year later.

He explained that the problem was precipitated by the late decision to develop a turbocharged engine for the 2016 WEC.

"When we came to Le Mans the engine was working very well when everything was going well, but when we lost the pipe [from the turbo to the intercooler] the systems were not able to handle that and we lost completely the power," he said.

"Now if this happens, the system will immediately use the other bank of cylinders and we will do a lap of four minutes rather than 3m20s.

"It is a good example of a problem whose magnitude depends on how well you are prepared."

2014 A slim but stable advantage over Audi during the night is undone when an FIA sensor short circuits and strands race leader Kazuki Nakajima out on track.

The Toyota had been scheduled to stop at the end of the lap to have the issue fixed. 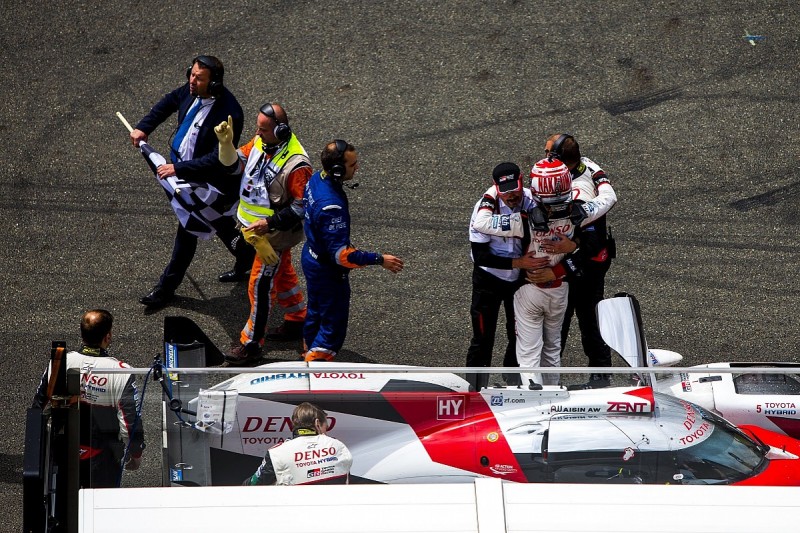 2016 Toyota is on course for victory after a thrilling battle with Porsche until Nakajima loses power early on the penultimate lap when a connection on an airline between the turbo and intercooler fractures.

He is able to complete the race, but the car is excluded because its last lap is too slow.

2017 Toyota loses its best chance for victory in the night when Kamui Kobayashi is waved through a red light at the end of the pits by someone he thinks is a marshal, but turns out to be another driver.

The Japanese driver is told to stop and then burns out the clutch trying to get going.