"The track grip is quite low because there are no support races and the windy conditions mean there is a lot of silica on the track," Vasselon said.

"There will be very different temperatures from the beginning of the race to the end, so it will be very easy to get the balance wrong and therefore there is a better chance to compensate for the 0.54s.

"I would say there is more room for mistakes on set-up, which could give an opportunity: we are at one of the places where it is possible to compensate for the handicap."

Vasselon also pointed to the Spa WEC round in August when Kobayashi, Conway and Lopez overcame a 0.44s differential in success handicaps between the two TS050s to win a wet-dry race.

The reduced temperatures towards the end of the race, which finishes at 10:00pm local time, mean there could be an advantage in switching from the medium compound Michelin to the so-called 'soft hot', according to Vasselon.

He said that the two Toyota crews "should give it a try" at some point, but that they would have to "improvise" because the team has so far yet to run the tyre over the course of the Bahrain meeting. 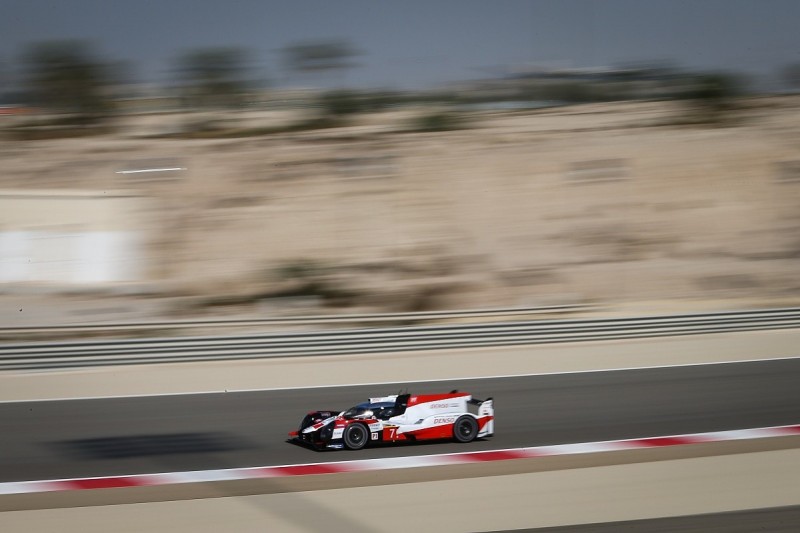 Vasselon also revealed that the the gap of 0.751s between the Toyotas in qualifying could be explained in part by the set-up run by the drivers of the #8 car.

"It can be probably explained by an aggressive set-up to try to compensate for the handicap," he said.

"The car was too much on the nose, too unstable."

Toyota has promised what Vasselon described as "a fair fight" between the two cars: he has vowed that the team will not make strategic calls that compromise the race of one or other of the cars.

But he stressed that Toyota's rules of engagement demanding the slower car has to cede position if the two TS050s are together on track and the freezing of the order at the last pitstop are still in force in Bahrain.

"Everything that regulates the on-track situation will remain in place because the reasons remain valid: we want to avoid incidents between the two cars," he said.

Pole position for the #7 car, which was qualified by Conway and Lopez, means that the gap at the head of the championship has now closed to six points.

Because Bahrain is an eight-hour race, the winners gets 38 points rather than the 25 for a six-hour race and the second-placed car 27 rather than 18.

The world title will go to whichever of the Toyota crews wins a race in which the Japanese manufacturer has no opposition in LMP1.