Toyota dominated a rain-hit opening round of the 2019/20 World Endurance Championship season at Silverstone, as Mike Conway, Jose Maria Lopez and Kamui Kobayashi took victory in the #7 car

Both the TS050 Hybrids finished a lap clear of the field in the four-hour contest, with the #7 crew leading home the sister #8 car shared by Sebastien Buemi, Kazuki Nakajima and team newcomer Brendon Hartley by just under two seconds.

The two Toyotas swapped the lead multiple times throughout, with the decisive move coming when Kobayashi passed Hartley just shy of the halfway mark on track after a rain shower.

Lopez was able to build a buffer of 10s in the latter stages, although Nakajima reduced that to virtually nothing in the final half-hour, dutifully completing a one-two.

Rebellion's #3 crew of Loic Duval, Pipo Derani and Nathanael Berthon completed the podium despite picking up two penalties for technical infringements, although the trio did enjoy two spells in the lead.

The first of these came after an early full-course yellow period triggered by the #6 Ginetta shedding its right-rear wheel.

Both Toyotas pitted a lap later than the Rebellions, just as the FCY ended, allowing both Rebellions through into a shortlived one-two.

The arrival of rain midway through the second hour shuffled the order again, as the Toyotas initially tried to brave it on slicks while the Rebellions both came in to change to wets.

At one stage the Toyotas were losing 15s per lap to the Rebellions, and although the Japanese cars were able to take on wets without losing the lead, a subsequent safety car period - a result of a coming-together between Oliver Jarvis in the #6 Ginetta and Miguel Molina in the #71 Ferrari at Becketts - closed the pack up again.

The #3 Rebellion jumped back into the lead by coming in for slicks a lap earlier, but once again was powerless to prevent the Toyotas from getting by at the following restart. 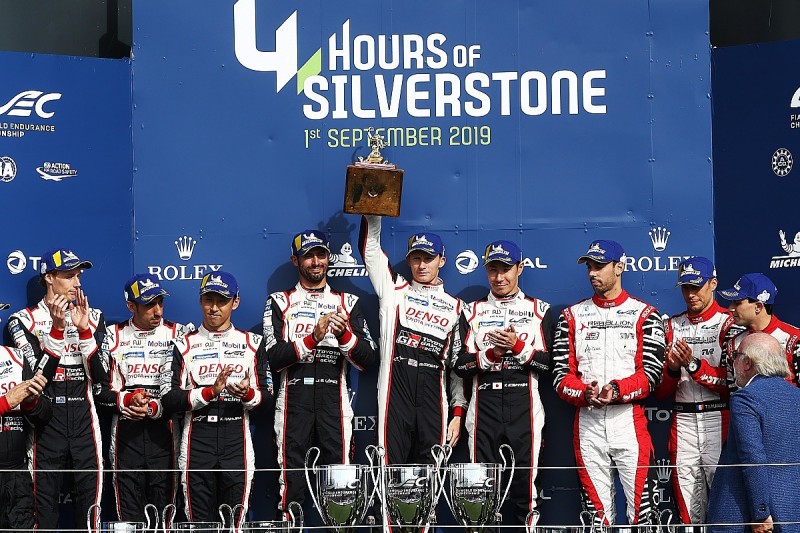 Derani had already fallen over 20s down when the #3 car was given a stop-and-go penalty for a fuel flow infringement, before it was then hit with another stop-and-go for the same offence in the final half-hour.

Rebellion's #1 car, shared by Bruno Senna, Gustavo Menezes and Norman Nato, had already been ruled out a podium by a slow three-minute stop, the result of Nato knocking over his mechanics.

But it was set to finish fourth before a late five-minute visit to the garage to fix a power steering problem dropped it to fifth in LMP1 behind the lead Ginetta.

Charlie Robertson, Egor Orudzhev and Ben Hanley enjoyed a largely smooth run in the best of the AER-powered G60-LT-P1s, albeit delayed by an off for Hanley on his out-lap at Luffield, narrowly overcoming the best of the LMP2 cars for fourth overall, four laps down.

The #6 Ginetta, which had already made multiple trips to the garage after losing its wheel early on, continued after Jarvis's incident and finished 17 laps down. 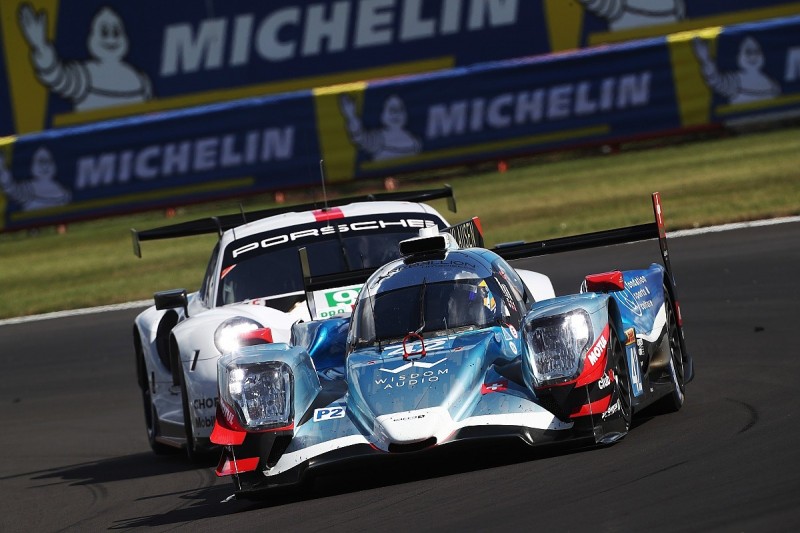 Job van Uitert had built a sizeable advantage just shy of the halfway point in the #29 Racing Team Nederland ORECA, but the second safety car period allowed the Cool Racing car to close right in and shortly afterwards Lapierre passed for the lead.

The TDS-run RTN car then faded when Frits van Eerd took over from van Uitert for the final hour, and in the end the Dutch gentleman driver was pipped to second by Toyota LMP1 reserve driver Thomas Laurent in the #36 Signatech Alpine ORECA.

Laurent, Andre Negrao and Pierre Ragues ended up 49s down on the class-winning Cool Racing car, and two seconds clear of the RTN ORECA shared by van Eerd, van Uitert and Giedo van der Garde, who completed an all-Michelin podium in LMP2.

Best of the Goodyear runners was the #37 Jackie Chan DC Racing ORECA in fourth, while United Autosports' WEC debut ended after just a handful of minutes when a so far undiagnosed mechanical issue left Paul di Resta stranded on track. 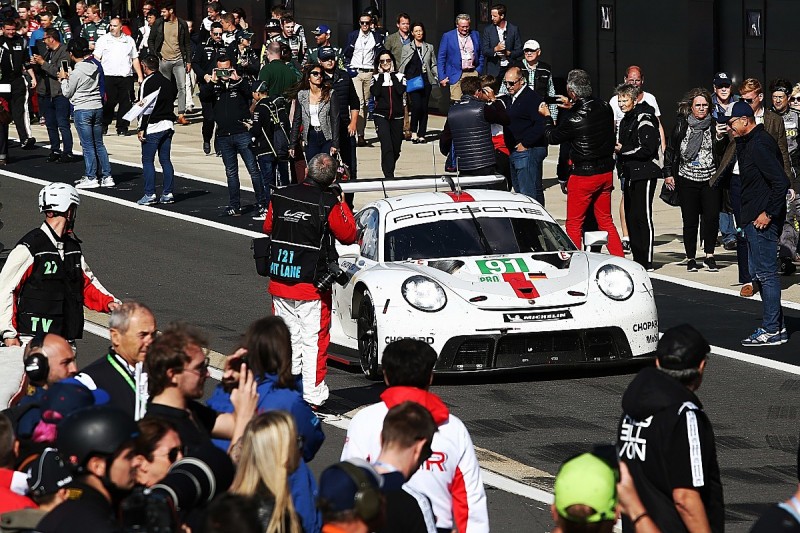 Both Porsche crews gained considerable time over their opponents in the wet middle phase of the race, but their advantage was lost in the second safety car period - allowing the sole remaining works Ferrari 488 GTE of James Calado and Alessandro Pier Guidi back into contention after an early puncture appeared to ruin its chances.

Pier Guidi picked off both Porsches to retake the lead after the restart, only to fall behind in the next pitstop cycle.

He was challenging Christensen again when he was forced to serve a drive-through penalty for overtaking under the safety car.

That meant the lead Aston Martin Vantage GTE of Alex Lynn and Maxime Martin was able to take the final podium spot, while Pier Guidi and Calado had to be content with fourth.

The trio finished a lap ahead of the works Aston Martin shared by Paul Dalla Lana, Darren Turner and Ross Gunn, while the MR Racing Ferrari of Motoaki Ishikawa, Kei Cozzolino and Olivier Beretta rounded out the podium spots.