Pascal Zurlinden, head of factory motorsport at Porsche, made the prediction on the announcement of the German manufacturer's return to front-line sportscar racing in the World Endurance Championship and the IMSA SportsCar Championship with a new LMDh prototype in 2023.

He suggested that he expects more manufacturers to join Porsche and Audi, which are developing LMP2-based LMDh cars, and Toyota and Peugeot, which have committed to the WEC with Le Mans Hypercar machinery.

"If you look at all the manufacturers around the table... let's see who is signing in the end," he said.

"Big names are coming, Toyota, Audi, Peugeot, let's see who is next.

"We could go back to the '80s and '90s with lots of cars and lots of manufacturers, and if everyone does some customer cars in the field, this could become really big for all of us."

McLaren has declared an interest in LMDh, while Ferrari has revealed that it is evaluating both routes into prototype racing.

Honda brand Acura has signalled its intent to continue in IMSA beyond the life of its existing ARX-05 Daytona Prototype international.

Zurlinden was drawing an analogy with the Group C and IMSA GTP era of the 1980s and early '90s.

Porsche competed against multiple manufacturers, including Lancia, Jaguar, Nissan, Toyota and Mercedes, in Group C in the forerunner of the current WEC. 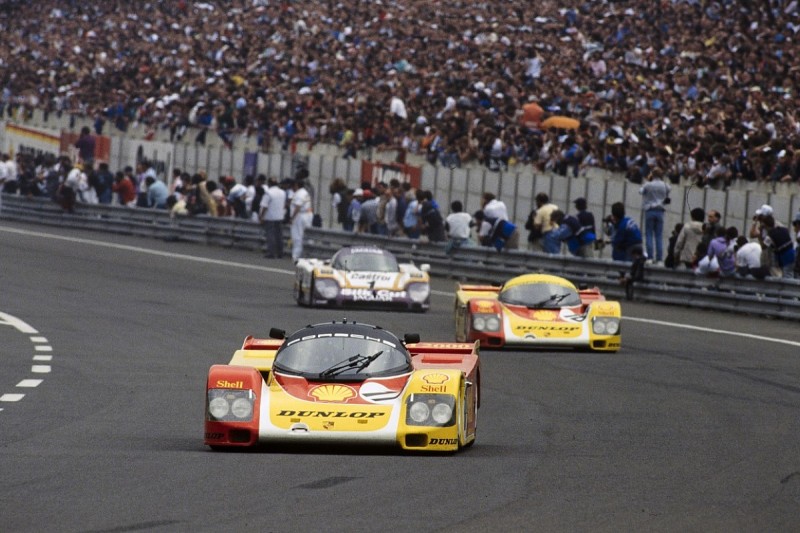 In North America, the German manufacturer battled with Nissan, Jaguar, Chevrolet, Toyota and others using the same basic 962 design that raced in the world championship.

Customers running the 962 and — in the world championship, its 956 forebear — won races in both arenas.

Zurlinden explained that Porsche has yet to define how it will attack the WEC and IMSA series from 2023, whether with full-factory teams, customers or a mixture of the two.

But he dropped clear hints that the new Porsche LMDh hybrid prototype will be made available for sale to privateers.

Zurlinden again drew comparison with Group C and IMSA GTP, pointing out that customer teams were able to beat the factory Porsches in both championships.

He said it is in Porsche's motorsport DNA to see its cars fighting.

"If a customer would win, even if we would have a works team, in the end it is still a Porsche, so we would be really happy," he explained.

He described such a scenario as Porsche's "target" with the new programme without committing to building customer cars.

Le Mans organiser and WEC promoter the Automobile de l'Ouest described Porsche's announcement that it will race in the new Hypercar class, which will combined LMH and LMDh machinery from 2022, as "excellent news for endurance racing".

ACO president Pierre Fillon said that commitments of Porsche and Audi to LMDh "prove that our regulations, boosted by a historic agreement with the USA [IMSA], are an attractive proposition".