They combined to take Toyota's third WEC pole of the year by just over a tenth from Porsche's new high-downforce version of the latest 919 Hybrid.

That gave them a 1m38.118s average and pole by just over a tenth of a second from Porsche drivers Brendon Hartley and Timo Bernhard.

Lopez, who has returned to the #7 car after driving Toyota's third entry at last month's Le Mans 24 Hours, said: "It was a good lap, but a bit of a surprise because Porsche had been so strong in free practice.

"It was my first qualifying attempt on quali settings, low fuel and new tyres, so I wasn't expecting to be so competitive."

Hartley and Bernhard ended up just six thousandths quicker on aggregate than the sister Porsche qualified by Neel Jani and Andre Lotterer.

The second Toyota qualified by Kazuki Nakajima and Anthony Davidson was within six tenths of the pole despite Nakajima setting his time on his third lap on the tyres.

That put them two tenths ahead of the Jackie Chan DC Racing ORECA qualified by Thomas Laurent and Oliver Jarvis.

Third place went to the best of the Rebellion ORECAs qualified by Bruno Senna and Julien Canal. 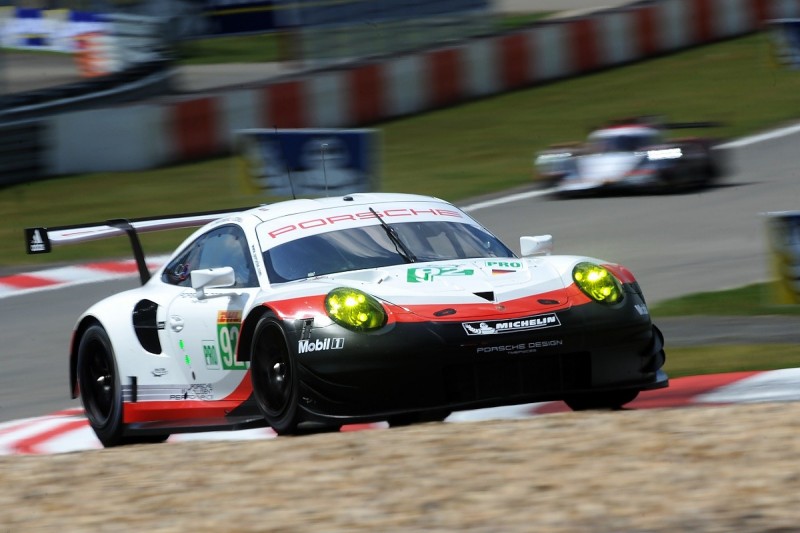 That gave them a three-tenths magin on the #95 Aston Martin Vantage GTE shared by Marco Sorensen and Nicki Thiim, who ended up with a 1m54.352s average.

The second Porsche qualified third in the hands of Richard Lietz and Frederic Makowiecki on 1m54.518s despite using only one set of tyres.

Ford took fourth with Olivier Pla and Stefan Mucke in the #66 Ganassi entry.

The best of the AF Corse Ferrari 488 GTEs was a further tenth behind in fifth with Davide Rigon and Toni Vilander.

Pedro Lamy and Paul Dalla Lana took their third GTE Am pole position of the season in their AMR-run Vantage.