Porsche dominated first qualifying for the 2015 Le Mans 24 Hours, with Neel Jani leading a one-two-three for the German manufacturer on Wednesday evening

Jani set a blistering 3m16.887s early on to take provisional pole, a lap fast enough to be the quickest pole position for the race in terms of laptime since 1989 should it not be beaten.

Jani's #18 Porsche and Timo Bernhard's #17 entry immediately laid down markers when the two-hour session began, quickly making it clear that none of the other manufacturers would be a factor in the fight for pole.

They were joined at the head of the field by the third #19 car, which was sent out slightly later in the hands of Nick Tandy.

Loic Duval was the best of the Audi drivers in the #8 R18 e-tron Quattro, but his lap was nearly three seconds adrift of Jani's mark.

Audi comfortably had the measure of Toyota in the battle for best of the rest, with Marco Bonanomi slotting the #9 car into fifth early in the session and Benoit Treluyer setting the best laps for the #7 car in the final 30 minutes.

But things didn't all go smoothly for Audi. Rene Rast spun the #9 car at Mulsanne corner, while Treluyer lost the #7 car at the first Mulsanne chicane long before he settled in for his run of quick laps at the end.

The Frenchman hit trouble again at the first chicane at the end of the session, clouting the left-hand kerb and sending himself into the gravel on the outside.

Last year's polesitter, Toyota, was a distant spectator to the action ahead from the moment the first qualifying laps were posted.

The TS040s ended the session more than six seconds off the pace of the Porsches, with a late effort from Stephane Sarrazin jumping the #2 car ahead of the #1 machine in their lonely battle for seventh place.

The Toyotas finished the session only three seconds clear of the leading Rebellion entry, with Mathias Beche setting a 3m26.8s to comfortably beat the team's fastest lap from 2014 qualifying.

Nissan completed its first qualifying session with mixed fortunes for its three cars, which were led by the #23 entry in 12th overall with Jann Mardenborough at the wheel.

The Briton's lap wasn't quite good enough to outpace the leading LMP2 car, but it was way clear of its LMP1 team-mates.

The #22 Nissan crept up the order to finish the session 20th overall with Harry Tincknell, while the troubled #21 entry was 30th in the hands of Lucas Ordonez after logging only nine laps.

Like the front end of the field, the best times in LMP2 came early on.

Jon Lancaster went within a second moments later in the Greaves Motorsport Gibson, but that was as close as anyone got to Bradley all night.

The Greaves entry remained second despite Gaetan Paletou crashing at Mulsanne Corner halfway through the session, resulting in a 25-minute red flag. 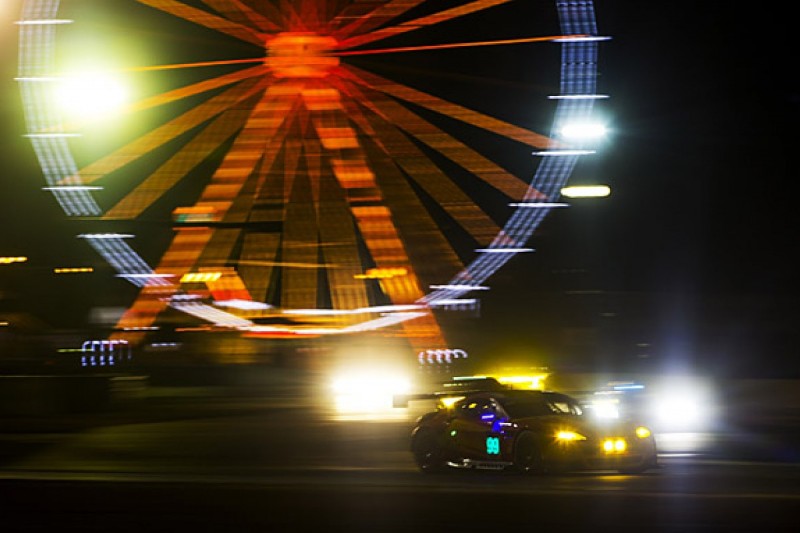 Richie Stanaway headed an Aston Martin Racing one-two in GTE, as the British marque secured provisional pole in both categories.

The New Zealander, quickest in practice, set a best lap of 3m54.928s in the #99 Vantage to edge Am-class pacesetter Pedro Lamy in the sister #98 Aston.

Stefan Mucke (#97) and Marco Sorensen (#95) made it four Astons in the top five with late improvements, demoting the lead Chevrolet Corvette C7.R to sixth in GTE Pro.

Porsche fared worst of the four manufacturers. Jorg Bergmeister and Frederic Makowiecki put the #91 and #92 Manthey-run 911 RSRs ninth and 12th in GTE respectively, which left them slower than three Am-class entries.

Several cars were reported for track-limits offences, particularly at Tertre Rouge, though only the #71 Ferrari was punished.

AF Corse driver James Calado was stripped of his early fourth-best laptime and the car dropped to last, though the Briton did rise to 10th in GTE with a late flying lap.

When Nissan should have won Le Mans