Toyota survived a major scare to claim a third World Endurance Championship victory of 2021 at Monza ahead of Signatech Alpine, as United Autosports finished on the overall podium.

Mike Conway, Kamui Kobayashi and Jose Maria Lopez led from pole position in the #7 GR010 Hybrid and were untroubled for most of the race, as neither Alpine nor Glickenhaus were able to challenge the two Toyotas on race pace.

But there was drama at the beginning of the penultimate hour when Kobayashi crawled to a halt on the long straight following the second Lesmo corner with a suspected technical problem, allowing the #709 Glickenhaus 007 LMH-Pipo of Romain Dumas to come through and take the lead.

Kobayashi eventually managed to restart the car and get going again, but rejoined the track 40s behind the Glickenhaus.

There was a reprieve for Toyota when the American boutique manufacturer elected to bring the car into the garage for a precautionary brake change, but the Alpine - which had dropped to third after making an earlier stop - remained in contention for victory.

The race was set to go down to the wire as Conway needed to make a late splash and dash to ensure the #7 GR010 could make it to the finish line.

But a late full course yellow to recover debris from the track put paid to the chances of a late scrap for victory between Toyota and Alpine, Conway essentially earning a free stop and emerging from the pits with the best part of a minute ahead of Matthieu Vaxiviere.

An investigation into Toyota’s final pitstop had the potential to throw a spanner in the works, but the manufacturer was able to get away with a warning, ensuring it continued its unbeaten run in the Hypercar era as the #7 crew claimed its first win of 2021.

Vaxiviere, Nicolas Lapierre and Andre Negrao finished second in the #36 Alpine, earning the French manufacturer its joint-best result since it stepped up to the top class of the WEC with the grandfathered A480-Gibson that was previously campaigned by the Rebellion LMP1 team. 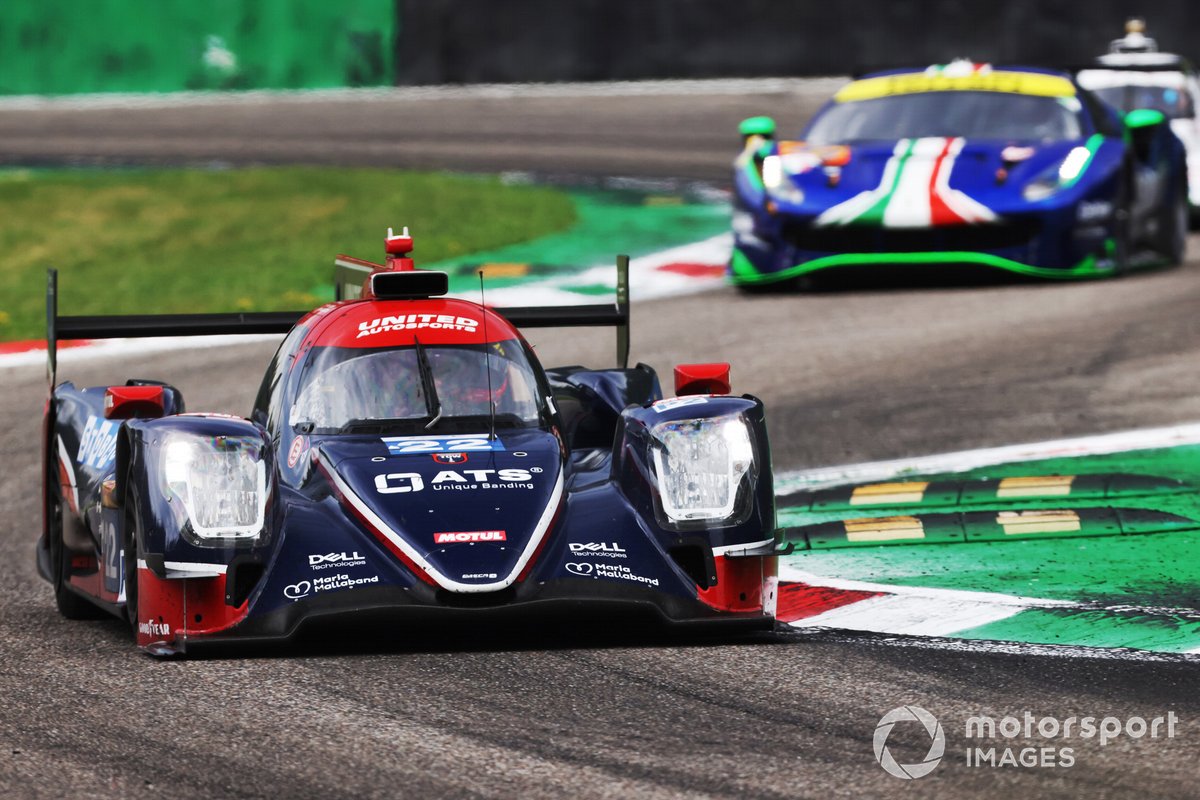 The #709 Glickenhaus of Dumas, Richard Westbrook and Franck Mailleux eventually finished third in class and fourth overall after losing a number of laps in the pits due to a brake change.

The sister #708 entry driven by Pipo Derani, Gustavo Menezes and Olivier Pla was running on seven cylinders and had to pit for a change of spark plug before eventually retiring from the race.

The #8 Toyota of Brendon Hartley, Kazuki Nakajima and Sebastien Buemi was classified 43 laps down in fourth in the Hypercar class after having to make four trips to the garage with multiple technical gremlins, including for a fuel pressure issue.

Technical issues or retirements for all but the Alpine meant an LMP2 car finished on the overall podium for the first time since last year’s season finale in Bahrain, where only two cars were entered in the top class.

It was United Autosports that seized the opportunity, beating the WRT team that started on pole position.

The lead changed hands on a number of occasions but an ill-timed pitstop before a FCY by WRT proved to be decisive, granting the #22 crew of Filipe Albuquerque, Phil Hanson and Fabio Scherer an advantage they wouldn’t concede.

Robin Frijns, Ferdinand Habsburg and Charles Milesi eventually finished second in the #31 WRT ORECA, just under a minute behind the class-winning machine.

Inter Europol Competition finished fourth in the #34 ORECA driven by Alex Brundle, Renger van der Zande and Jakub Smiechowski despite a drivethrough penalty for causing a collision with the #70 RealTeam ORECA in the opening 30 minutes of the race.

The #28 JOTA trio of Stoffel Vandoorne, Sean Gelael and Tom Blomqvist recovered from a crash in qualifying to finish fifth.

Risi Competizione’s preparatory appearance for the Le Mans 24 Hours ended in disappointment as Oliver Jarvis, Felipe Nasr and Ryan Cullen finished 10th in the #82 ORECA after running inside the top five early on in the race. 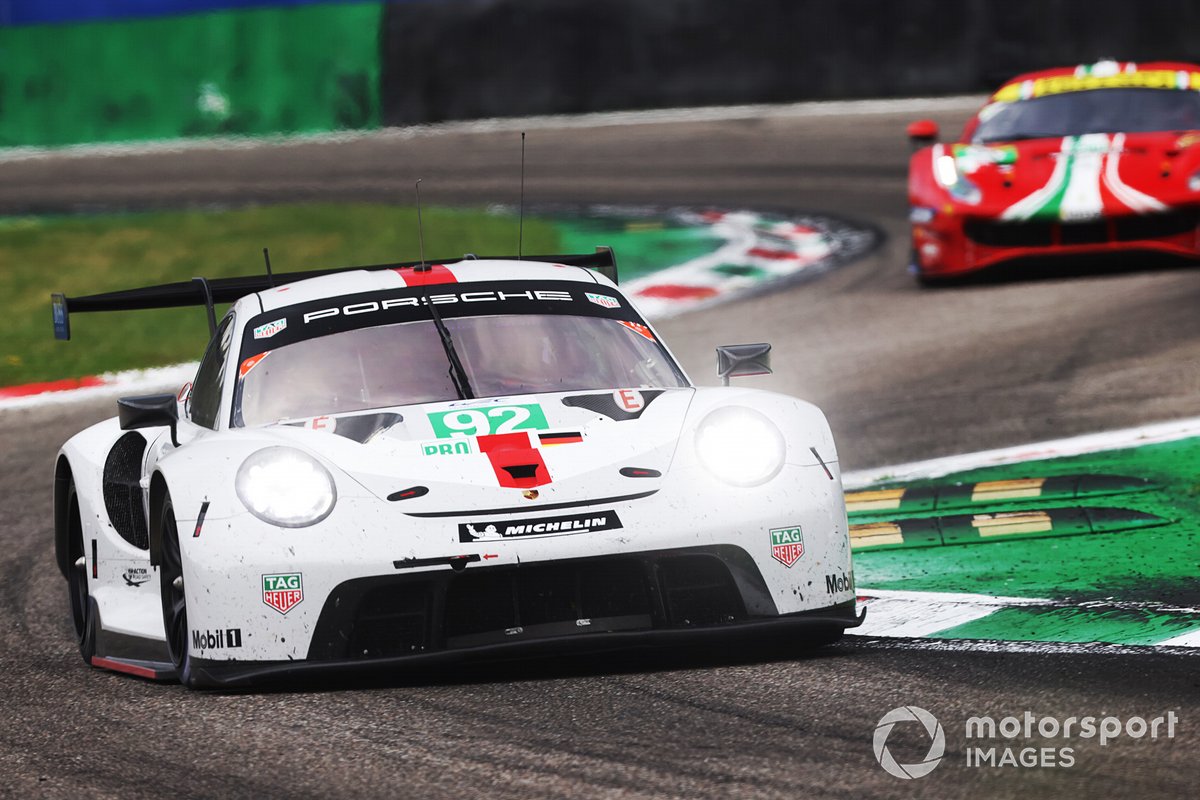 Porsche denied Ferrari a GTE Pro victory on the Italian marque’s home turf, with Kevin Estre and Neel Jani scoring their second win of the season in the #92 911 RSR-19.

Porsche lost the lead during the third hour when Jani was overtaken by James Calado in the #51 Ferrari 488 GTE Evo at the exit of the first chicane, but a faster pitstop allowed it to return to the front and then cruise to a comfortable win.

Estre and Jani eventually crossed the line 32s clear of Calado and Alessandro Pier Guidi, who had to pit with five minutes to run for a fuel-only stop.

Richard Lietz and Gianmarina Bruni took the final spot on the podium in the #91 Porsche ahead of #52 Ferrari duo Miguel Molina and Daniel Serra, after Lietz passed Molina under braking into Turn 1 in the penultimate hour.

That was despite Bruni picking up visible damage on to the front-left side of his car when he hit the #47 Cetilar ORECA LMP2 car of Roberto Lacorte, who spun in front of him at the exit of the second Lesmo in a repeat of Vandoorne’s crash that brought qualifying to a halt on Saturday.

Despite their disappointment in the GTE Pro class, AF Corse and Ferrari did claim victory in the GTE Am category, with Francois Perrodo, Nicklas Jensen and Alessio Rovera crossing the line 45s clear of the opposition in the #83 488 EVO.

The battle for second was decided on the final lap, as the #98 Aston Martin trio of Augusto Farfus, Paul Dalla Lana and Marcos Gomes beat the customer #777 D’station Vantage of Tomonobu Fujii, Satoshi Hoshino and Andrew Watson.

Ben Keating led the race from pole in the #33 TF Sport Aston Martin Vantage but paid the price of extending his second stint beyond the expected tyre life, the front-left Michelin spectacularly exploding at high-speed and shredding bodywork on his car. The debris thrown on track prompted the only safety car appearance of the race.