Kevin Estre says he “can’t remember such a close fight” in the FIA World Endurance Championship’s GTE Pro class as the Porsche and Ferrari scrap at Monza last weekend.

Although Porsche took the chequered flag with a winning margin of over 30 seconds, that didn’t reflect how closely matched the two manufacturers were in Italy, with the race ebbing and flowing as three full-course yellows and a safety car period shook up the order.

Estre and Pier Guidi traded places during the opening two stints, before Porsche pulled clear of the Ferrari as they swapped their drivers for the first time.

The race started coming back towards the Italian marque after the mid-race safety car period, with Calado barging past Jani at the exit of the first chicane - with the Swiss driver running wide over the kerbs and also losing a place to the sister #91 Porsche.

A faster pitstop propelled the #92 car back into the lead, but Estre was chased hard by Pier Guidi in the final hour, the gap between the two cars remaining under a second for the duration.

Ultimately, Ferrari was forced to bring in Pier Guidi with five minutes to run for a splash-and-dash, giving Estre some breathing space after a fierce battle for much of the six-hour race.

The result elevated Estre and Jani to the top of the GTE Pro drivers’ standings, two points clear of Ferrari duo Pier Guidi and Calado. 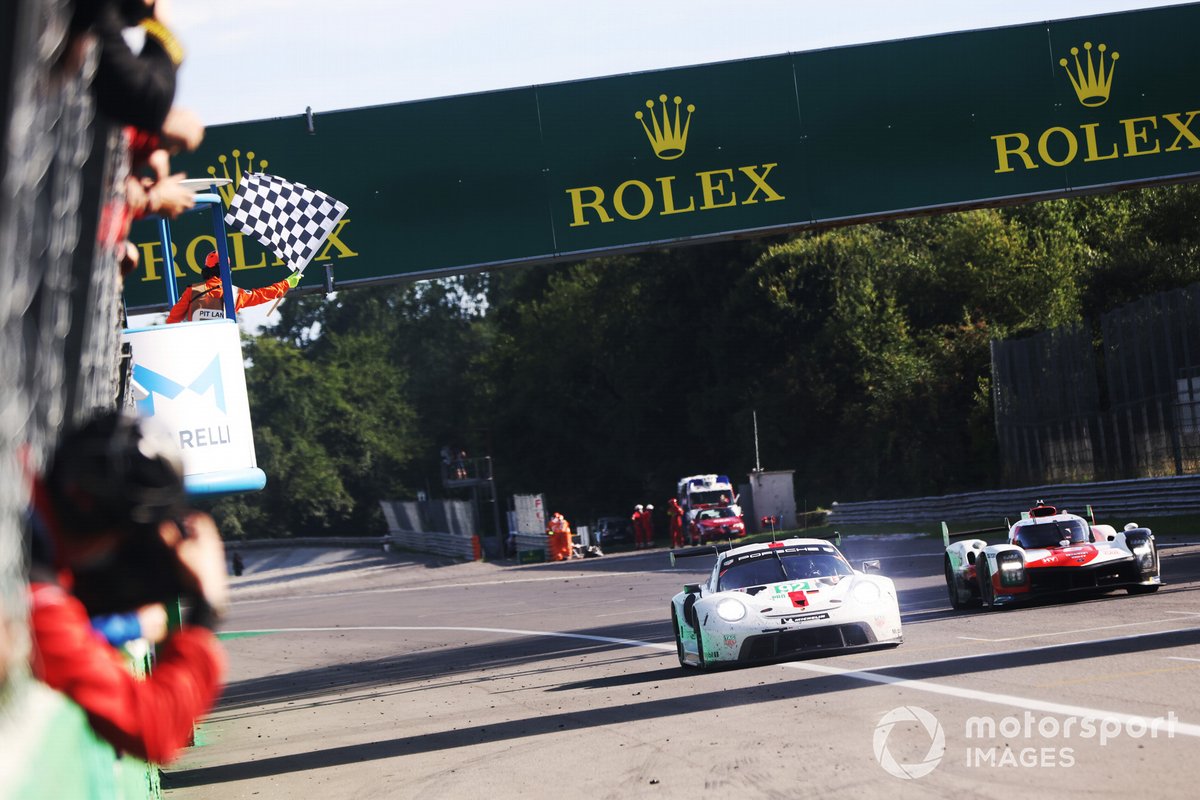 Despite earning pole position, Estre explained that Porsche's victory was as hard-won as any he could remember since joining the Weissach marque's WEC roster in 2017, even if it was fighting only a single manufacturer following Aston Martin’s withdrawal from the series over the winter.

“Pole position is always good but at the end of the day you have a six-hour race and that’s the one you want to win,” said Estre.

“But to be honest even if we had pole position, we were the challenger there because Ferrari was a little better than us the whole weekend until that point.

“But I think we took it perfectly, we did the perfect race in the pitstop, in the strategy, in the car, no mistakes on pitstops or strategy, that’s how we won.

“Very, very pleased with that one because it was a very very tough one. I can’t remember the last four years having such a tight fight  the whole race in GTE Pro. [It] doesn’t matter how many cars you have if you win with that small margin, this feeling is always a great feeling.”

Jani said he had expected the fight between Ferrari and Porsche would go down the last lap, and described Pier Guidi's late stop as “a big relief," he said of Ferrari's late stop.

"He was very quick at the end and pushing hard, so it was kind of nail biting there,” he said.

“But what a great race, six hours of straight out qualifying laps. I hadn’t had such a tight race for such a long time in the WEC.”