Glickenhaus ended up fastest in opening practice for this weekend’s Monza World Endurance Championship round as the debuting Peugeot Le Mans Hypercar got within a second of the pace.

Romain Dumas led the way in the solo Glickenhaus-Pipo 007 LMH with a 1m37.984s lap, which put him six tenths up on the solo Alpine-Gibson A480 and eight tenths ahead of the fastest of the two Peugeot 9X8s in third.

Alpine driver Andre Negrao headed the times with a 1m38.602s midway through the session before Dumas leapfrogged that time and Paul di Resta’s 1m38.802s in the #93 Peugeot to propel the Glickenhaus to the head of the times.

The form of the Glickenhaus follows a Balance of Performance break for the American entrant ahead of the Monza 6 Hours: the car has been given another 18bhp over the previous power level of the car.

The second Peugeot ended up in 20th position behind the entire LMP2 field, Loic Duval setting a 1m41.522s on the 11th of only 12 laps completed by the car.

The quicker of the two Peugeots stopped on track at the end of the session to simulate a problem with its hybrid system and was returned to the pits on the back of a flat-bed truck. 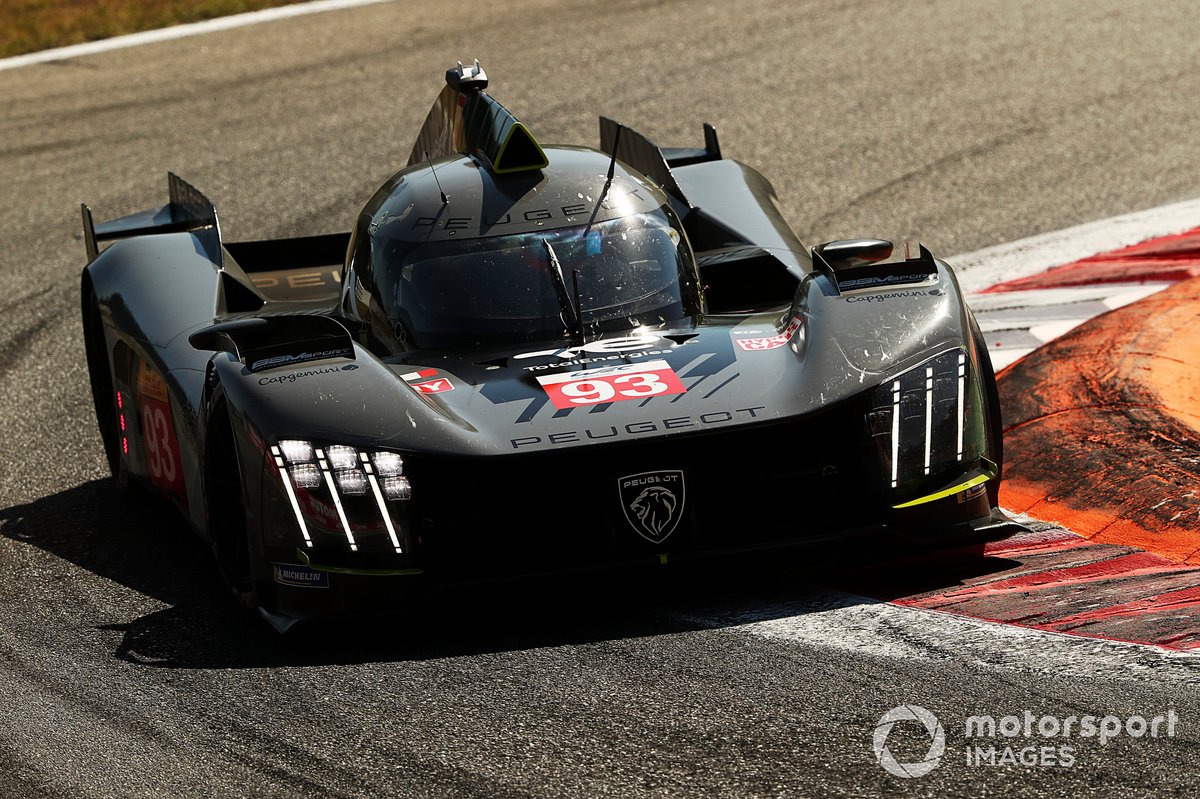 LMP2 was headed by AF Corse ORECA-Gibson 07 courtesy of a 1m39.973s from Alessio Rovera.

That put him three tenths up on the Realteam by WRT ORECA in second place; Norman Nato’s 1m40.222s on the final lap was a small improvement on Ferdinand Habsburg’s previous best in the car.

Another later improvement came from Esteban Gutierrez in the Inter Europol ORECA, a 1m40.356s vaulting him up to third in class.

The Prema ORECA in which Robert Kubica set a 1m40.468s took fourth position, while the #22 United Autosports and Signatech-run Richard Mille Racing entries rounded out the top six in the hands of Filipe Albuquerque and Charles Milesi respectively.

Kevin Estre led the way in GTE Pro for Porsche, setting a 1m47.273s to end up three tenths clear at the top of the times aboard the fastest of the two Manthey-run 911 RSRs.

Antonio Fuoco took second in the best of the AF Corse Ferrari 488 GTE Evos on a 1m47.597s, which gave him a margin of almost exactly a tenth over Nick Tandy’s 1m47.702s in the solo Chevrolet Corvette C8.R.

Ben Barnicoat was quickest in GTE Am in the Project 1/Inception Porsche 911 RSR, his 1m48.389s giving him a four-tenth margin over fellow Briton Ben Barker in the GR Racing Porsche.