The #8 car had briefly lost second to the leading Porsche of Neel Jani during the latest pitstop phase but Buemi quickly regained the place.

Then he was called back into the pits after another 10 laps with the brakes on fire, having suffered a "front motor" problem.

A frustrated Buemi had earlier warned the team over the radio there was some sort of problem, and was annoyed when he was later called in when an issue was finally found.

The car remains in the garage, with the team expecting it to be a "long repair".

At the front Mike Conway's advantage in the #7 Toyota (pictured) is 44s over Jani, while the #9 Toyota has been promoted to third after Buemi's problem. 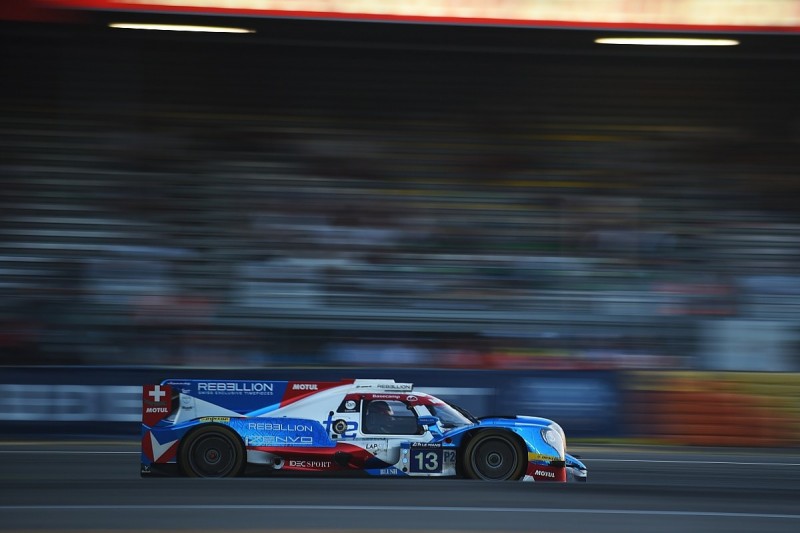 The Rebellion ORECA squad continues to run first and second in LMP2, but a drive-through penalty cost the #31 car of Bruno Senna the lead.

The Brazilian was deemed to have overtaken a car in a slow zone, and dropped to third place when he made his stop.

At the end of the hour, Piquet Jr in the #13 Rebellion ORECA has a lead of 9s, while Senna moved up to second after the out-of-sync Oliver Jarvis pitted in the #38 Jackie Chan DC Racing ORECA.

With Jarvis just over 40s off the lead and a huge advantage over the rest of the field, the battle for class victory is currently a three-horse race.

Best of the rest is the #25 Manor ORECA of Simon Trummer, who is three minutes down.

The best of the non-ORECAs is the #32 United Autosports Ligier of Filipe Albuquerque in seventh place.

Aston Martin's #97 Vantage remains in charge of GTE Pro and lost one of its principal rivals during the hour.

But the #64 Corvette that had been running third in the hands of Oliver Gavin has been pushed into the garage after Tommy Milner took over the car and spun at the Porsche Curves on his out-lap, hitting the wall with his rear-left and damaging a wheel.

Milner got the car going again but then spun in the pitlane entry as a result of the damage and was briefly beached on the kerb.

At the turn of the hour the out-of-sequence #92 Porsche, #66 Ford and #95 Aston - all of which are recovering from earlier incidents - were third, fourth and fifth.

The car that might have benefitted from the Corvette's off, the #71 AF Corse Ferrari, dropped to 11th in class as a result of Sam Bird picking up a penalty for track-limit infringements.

Ferrari moved into the lead of GTE Am after the #98 Aston, which had run at the front for the majority of the race, suffered a huge right-front blow-out after the Mulsanne Kink which damaged that whole corner of the car.

Will Stevens now leads the class in the #84 JMW Ferrari, with nearly a minute in hand over the #90 TF Sport Aston Martin currently driven by Rob Bell.