The 63-year-old was awarded an honorary Oscar last year in recognition of his long career in the movie business, and he was disappointed to be unable to attend Le Mans, where one of the Jackie Chan DC Racing ORECA-Gibson LMP2 cars led the race overall on its way to winning its class and finishing second behind the winning LMP1 Porsche.

The team gathered after the race to receive a brief message of congratulations from Chan via telephone.

"It's exactly like when I got an Oscar," he said. "Really, watching it on video, I'm just sorry I could not be there.

"But, anyway, no matter where you are, we win!

"We have to continue now, work hard for next year, and the coming years and years."

Cheng added: "From a team owner's perspective, having both cars reach the podium and for the #38 ORECA of Ho-Pin, Thomas and Oliver to win in LMP2 and to have led outright the race to eventually finish second overall is an amazing feat.

"It's also a number of firsts for a Chinese team and driver, which makes what we achieved here quite historical.

"A big thanks to everyone on our team, the calls from engineering were spot on, stops were quick and virtually flawless and the physio team kept the drivers going in grueling hot conditions." 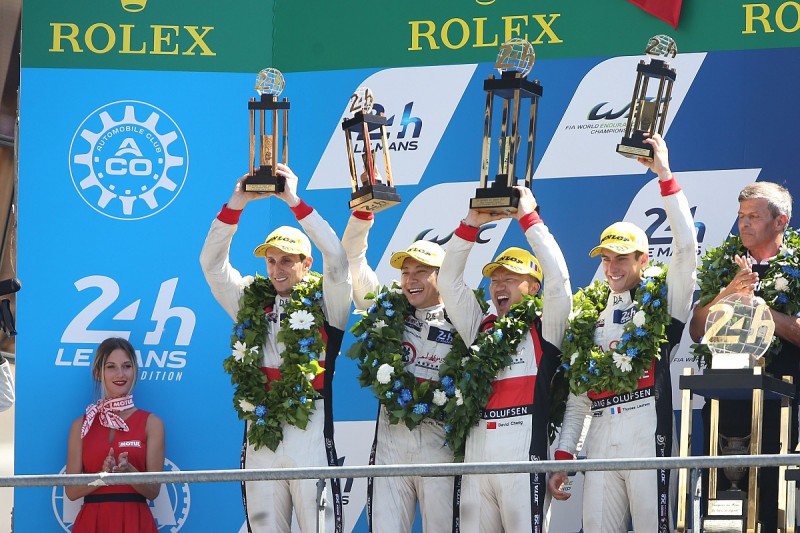 Jarvis, who joined the LMP2 team following Audi's withdrawal from the top class of sportscar racing, said it had similarities with Audi's works Joest outfit he raced for.

"What's really impressed me is the attention to detail and that goes from the mechanics right the way up through the team," he told Autosport.

"I'd actually compare it to Joest in the sense that Audi was a very big machine but the Joest guys were the core of the team.

"These guys are exactly the same, the effort, the hours they put in and the attention to detail as well.

"There isn't really a difference because they go about everything in the same methodical way and how a race team should.

"What really impressed me was Spa, we finished third and there was a massive debrief and trying to get to the bottom of why and where we can improve.

"Without that ability to look at yourselves and analyse I don't think we would have won Le Mans."