Toyota driver Brendon Hartley admits he was “surprised” at the gap the Fuji-winning #8 crew was able to pull out over the sister #7 car in Sunday’s penultimate round of the World Endurance Championship.

Hartley, Sebastien Buemi and Ryo Hirakawa eased to a dominant second win of the season on a day that both Toyota GR010 Hybrids were a cut above the competition.

While Toyota’s dominance over Hypercar class rivals Alpine and Peugeot in a fully green race came as little surprise, what was more unusual was how the #7 crew of Kamui Kobayashi, Mike Conway and Jose Maria Lopez lost so much ground to the #8 car.

The gap between the two Toyota crews at the end of the race stood at 1m08s, or around three quarters of a lap, despite the #7 car suffering no notable delays or incidents.

Hartley, who was at the wheel of the #8 for the middle portion of the race after taking over from Sebastien Buemi at around the two-hour mark, put the difference in performance between the Toyotas down to better anticipation of the warm race day conditions.

“We went in a different direction in set-up to car #7 as we saw the track temperatures were much higher than the rest of the weekend,” said the New Zealander. “Clearly it worked.

“I drove in the hottest part of the race and had a big advantage over the other car. Everything was flowing; I was actually kind of surprised with the gap I was able to build.

“It was one of those races where everything just worked out. We were very strong as a crew today and I don’t think we could have done much better.” 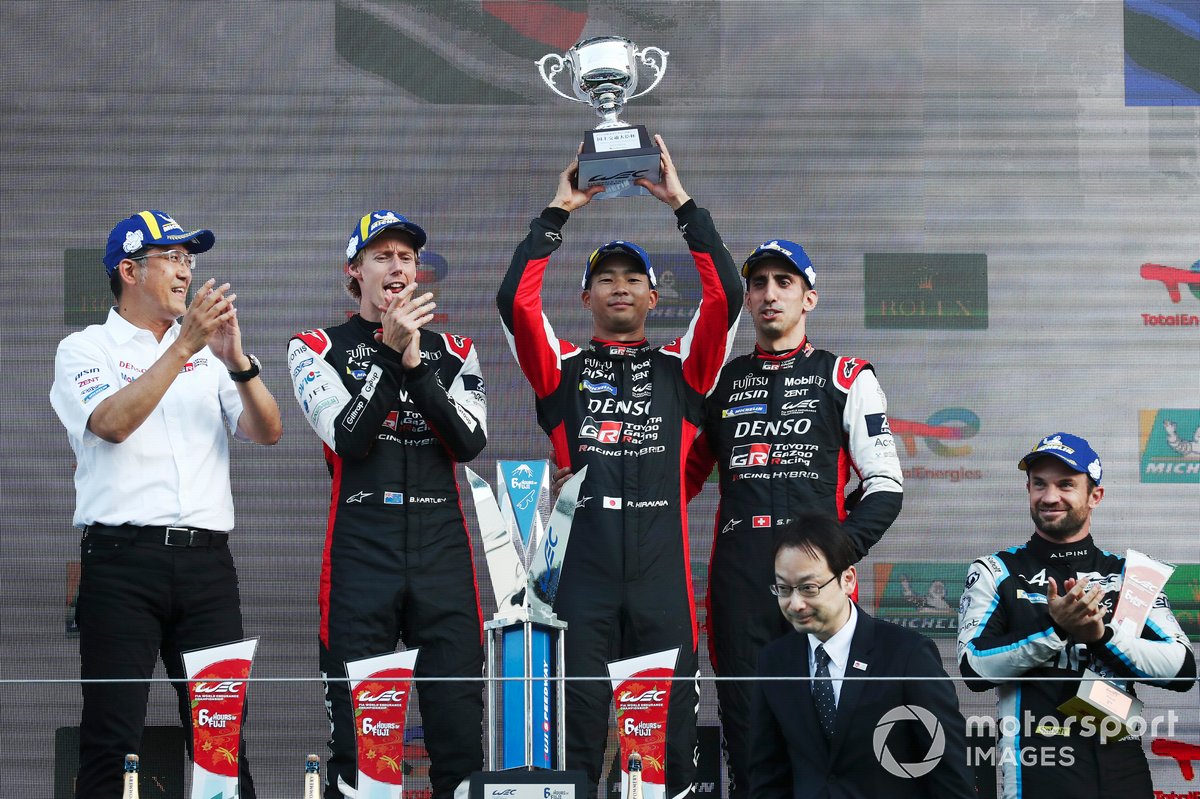 The #7 Toyota led the early part of the race having started from pole in the hands of Kobayashi, but in the second hour the call came for the Japanese driver to allow Buemi through into the lead, as it became clear the #8 car was the quicker of the pair.

Just six seconds split the two Toyotas at the end of the second hour, but by the time Hartley had handed over to Hirakawa for the run to the chequered flag, the margin had already ballooned to 38 seconds.

Toyota Gazoo Racing Europe technical director Pascal Vasselon acknowledged the pace difference between the manufacturer’s two cars was “absolutely unusual” but also said the warmer conditions of race day was the likely root of the discrepancy.

“Car #7 had a balance problem,” said Vasselon. “We have been using during the race tyres that we have tested, but in different conditions, so it was easy to make mistakes.

“I think car #7’s set-up was sub-optimal. Globally there was a better set-up anticipation [for the conditions] on car #8.

“The gap between the cars can be explained by the fact the race took place in conditions very different to testing and you had to extrapolate the test result somehow.”