AUTOSPORT recently reported that the sport's governing body was working with Le Mans organiser the ACO to come up with a set of regulations for 2014 that will encourage privateer teams to enter the top class of prototype racing.

With just three privateer LMP1 cars entered for Le Mans this year, and only two set to contest the full WEC season, the new rules package for 2014 will be designed to give privateers a chance to compete with factory squads from Audi, Toyota and Porsche.

President of the FIA endurance commission, Sir Lindsay Owen-Jones believes that giving privateers the chance to be in a position to capitalise on the misfortune of the factory teams will be enough to boost the numbers in the top class.

This is set to be achieved through creating a sub-class where non-hybrid cars such as those run by non-works teams will get advantages in terms of energy consumption and weight limits.

"Over the years the general aim has been to say that it is very difficult for a private team in LMP1 to challenge directly for winning the race overall," said Owen-Jones.

"But if something goes wrong with the manufacturer teams such as mechanical incidents or accidents, then those private teams will be ale to be close enough and perhaps come up with a surprise result.

"What we have done for the future regulations is to consider that there will be a class which is accessible to only private teams without hybrids and with a low weight limit.

"From the feedback that we get that seems to be an acceptable position for these teams to obtain sponsorship and continue."

He added that getting the LMP1 class entry up to 14 or 15 cars was a "reasonable expectation". 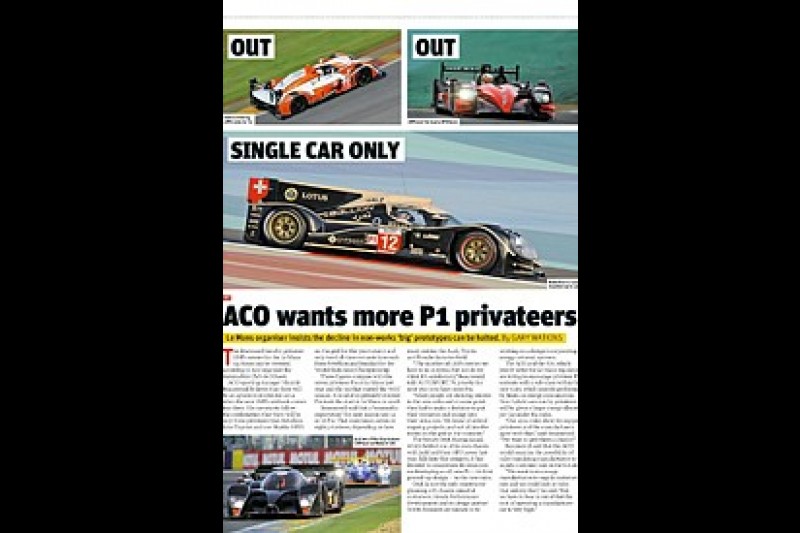 Comparing eras in any sport is a dangerous game, even when you're just adding up numbers.

But when I think back to my first Le Mans 24 Hours, there were 40 cars gunning for overall victory, while even in 1999 - the start of the modern era in my mind - there were 28. This year there are just eight cars entered in the top division.

That figure for LMP1 entries, a total that's split five-three between factory and privateers cars, frightens me. The reason is that it is part of a downward trend that seems to point towards the gradual disappearance of the independent team competing at the highest level of sportscar racing.

The Automobile Club de l'Ouest insists that reversing this trend is one of its top priorities, but it's got a job on its hands.

The 2014 rulebook, even with a non-hybrid route in for privateers, is inevitably going to create a category that is the playground for manufacturers.

They won't allow their ultra-expensive technological masterpieces to be beaten by low-tech privateer machines, so why would an independent bother?

There is an answer, and that's to force the manufacturers to sell cars. Some suggest that it might not be workable, but I seem to remember Porsche's decision to build customer 956s did wonders for Group C in the early 1980s.