Their Toyota TS040 HYBRID was delayed in the second hour by the need to change the alternator, but the failure of their only rivals for the title, Audi trio Andre Lotterer, Benoit Treluyer and Marcel Fassler, to finish second or higher means that Davidson and Buemi cannot be caught at the Interlagos series finale later this month.

Davidson said: "It hasn't sunk in yet - I couldn't bring myself to think it would happen.

"I've won big single events before but never a championship since I started racing cars.

"It is amazing: I can retire happy now."

The race was won by the second Toyota shared by Alex Wurz, Mike Conway and Stephane Sarrazin by 50 seconds from the Porsche 919 Hybrid of Neel Jani, Romain Dumas and Marc Lieb.

They were in front for much of the race despite making an early pitstop during a full course yellow period, which replaced the splash-and-dash that they would have need at the finish.

Jani was within striking range of Wurz after his final pitstop, but the clear advantage for the Toyota was restored once the Porsche made its splash with 20 minutes to go.

The second Porsche, shared by Mark Webber, Timo Bernhard and Brendon Hartley, finished less than seven seconds behind the sister car despite being on a different strategy.

Jani rejoined after his splash just ahead of Webber, but the Australian was powerless to challenge because he was on old tyres at the end of a double stint.

The Audi R18 e-tron quattros were again unable to challenge for a podium.

Lotterer and his co-drivers had the edge on team-mates Loic Duval, Lucas di Grassi and Tom Kristensen on the way to fourth.

The KCMG ORECA team notched up its second LMP2 victory of the season with Alex Imperatori, Richard Bradley and Matt Howson aboard its ORECA-Nissan 03R, after coming out on top in a battle with the similar SMP car driven by Nicolas Minassian, Maurizio Mediani and Sergey Zlobin. 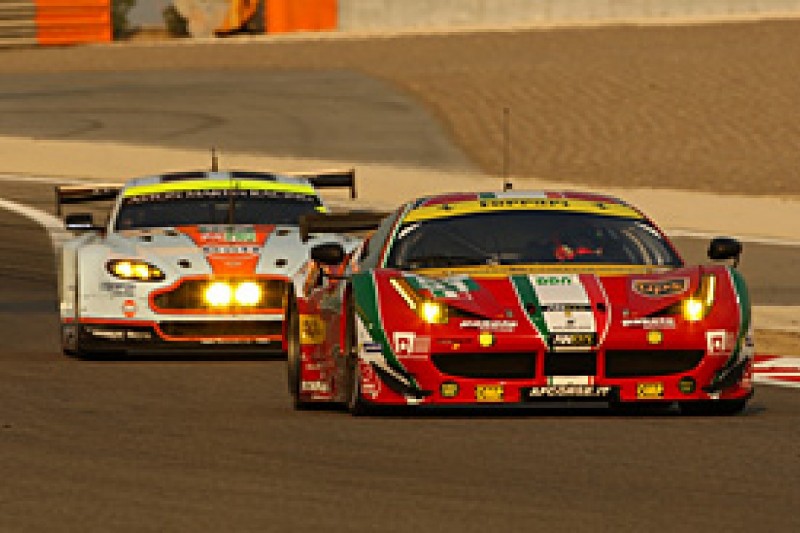 The SMP ORECA dropped out in the closing stages with gearbox problems and wasn't classified, allowing its sister car to move up to second.

Gianmaria Bruni and Toni Vilander wrapped up the GT drivers' crown with another victory aboard their AF Corse Ferrari 458 Italia.

They completed the six-hour race on one stop fewer than pursuers Darren Turner and Stefan Mucke in the lead Aston Martin Vantage GTE.

Turner's chase of Vilander after making his final stop with 45 minutes to go brought him to within two seconds of the Ferrari.