The #8 Toyota topped the times in first practice for this weekend's World Endurance Championship finale in Bahrain, despite carrying a half-second performance handicap

Sebastien Buemi posted a 1m43.457s immediately after a red flag right at the start of the 90-minute session.

His lap eclipsed the 1m43.949s set by Mike Conway in the #7 Toyota TS050 HYBRID shortly before FP1 was briefly stopped.

The LMP2 order was topped by Giedo van der Garde in the Racing Team Nederland ORECA-Gibson 07.

His time of 1m47.955s put him nearly two tenths up on the Signatech Alpine ORECA in which Andre Negrao recorded a 1m48.126s.

The time from Antonio Felix da Costa set at the of the session improved on team-mate Anthony Davidson's earlier best for the car by two hundredths.

The United Autosports squad that sealed the class championship with victory at Le Mans was fourth fastest with Paul di Resta. 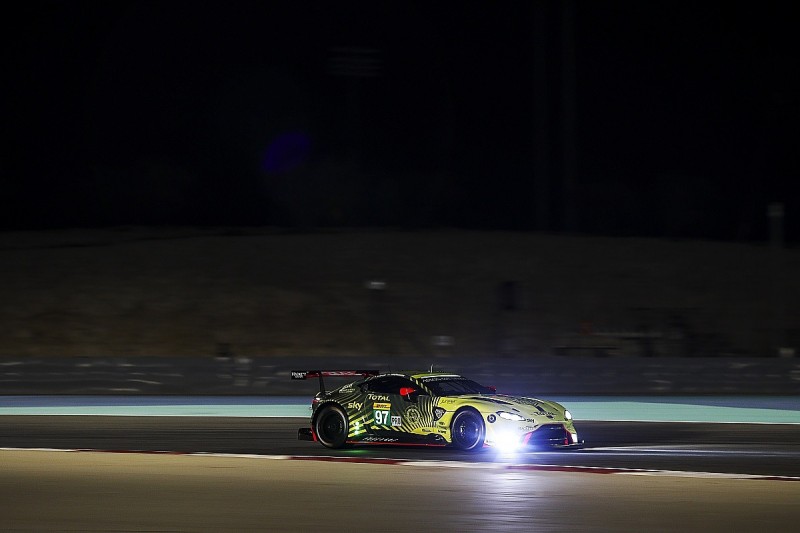 Aston Martin went to the top of the timesheets in GTE Pro in the closing minutes of the session.

Maxime Martin recorded a 1m56.560s in the #97 Aston Martin Vantage GTE he is sharing with Ricard Westbrook after Alex Lynn was ruled out of the Bahrain event following a positive COVID-19 test.

Porsche's Ricard Lietz, who set a 1m57.177s at the start of the 90 minutes, was pushed down to second by Martin's improvement.

The second of the factory Porsche 911 RSRs took third in the times with a 1m57.218s from Michael Christensen.

Nicki Thiiim ended fourth in the second of the Aston Martins on 1m57.508s.

The best of the AF Corse Ferrari 488 GTE Evos was more than two seconds off the pace on a 1m58.571s from James Calado.

The GTE Am class was led by Ross Gunn in the factory-run #98 Vantage.

His 1m57.666s set at the beginning of the session was almost equaled by Ben Barker's 1m57.688s in the Gulf Racing UK Porsche late in the session.

Free practice resumes with the second of the three sessions at 9:00am local time on Friday, with qualifying beginning at 6:00pm.