The two-time Formula 1 world champion is making his debut at Le Mans this year, with his car leading the race on Sunday morning.

It comes after he missed the Monaco Grand Prix - which he has won in the past - to contest last year's Indy 500, as part of his bid to complete the unofficial Monaco/Indy/Le Mans 'triple crown' of victories.

When asked by Eurosport how it felt to lead the race, Alonso said: "A tremendous privilege to lead the Indy 500, the Le Mans 24 Hours, the Daytona 24 Hours this year, [where] also we were in the lead for two laps, and also all the grands prix in many countries.

"I try to be a complete driver and hopefully all of these adventures make me a better driver for tomorrow.

"When I first thought about the 24 Hours, I have a huge respect for the race, and I was thinking more of an adaptation for the first couple of years and then go for the win.

"But we have a fantastic team behind us, two amazing cars out there, and we are fighting for the victory, so let's see if we can finish the job." 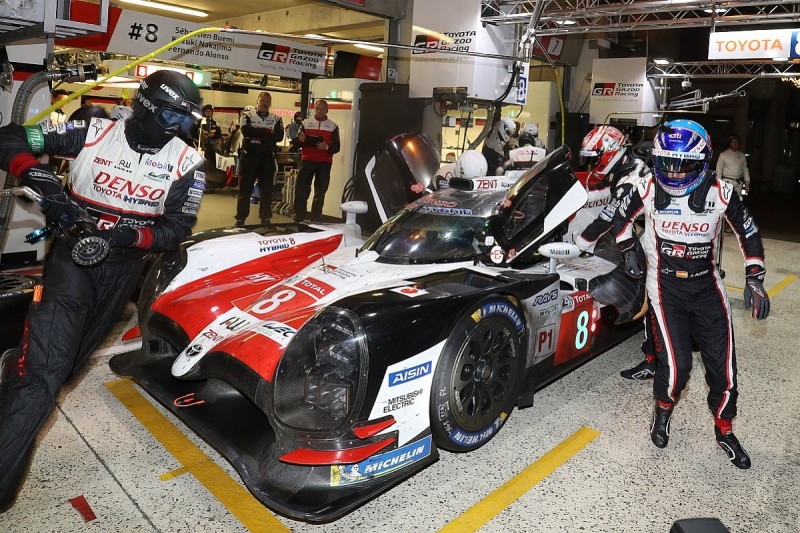 Alonso handed over the race-leading #8 Toyota TS050 HYBRID to Kazuki Nakajima, who put the car on pole position for the race and is scheduled to complete the final stint.

While the race looks to be under control, and Toyota is expected to tell the cars to hold station following the final pitstops, Alonso said the fact both cars remain on the same lap shows how hard the race has been.

"Definitely not easy - we are in a 24-hour race and we are separated by 60 seconds or something like that," he added. "That shows how much we push and how close it is.

"We recovered two minutes at night, that is where we felt we could do it, and we should do it, if we were interested in being in the race [for the lead].

"We pushed there, and now it's about bringing the car home with hopefully no reliability issues, no mistakes. It will be long hours until the end."