Kamui Kobayashi put the #7 Toyota TS050 HYBRID on provisional pole position for the Le Mans 24 Hours, before the car went airborne in a collision with an LMP2 runner

Kobayashi's best lap came during the early banker runs conducted by the majority of the field at sunset.

He was initially baulked on his first flying lap by swathes of traffic, but Kobayashi then backed off to set a 3m17.161s best effort that remained unbeaten for the rest of the session.

The #7 car was then involved in a late scare during Mike Conway's turn behind the wheel.

The Toyota came across the DragonSpeed ORECA-Gibson 07 driven by Roberto Gonzalez as the LMP2 car made a last-minute move to rejoin the track after a spin at the Ford Chicanes.

Conway had already entered the second corner of the complex carrying too much speed to avoid contact, forcing the Toyota to drive over the nose of the ORECA and go airborne.

Significant debris littered the track with just over 45 minutes remaining in the session, but both drivers were declared OK.

Toyota had stressed before qualifying that it believed both SMP Racing and Rebellion Racing could challenge it for pole and the #17 SMP entry led the times briefly after the first runs, courtesy of a 3m17.633s lap set by Egor Orudzhev.

But Kobayashi's benchmark shuffled Orudzhev's #17 SMP Racing machine to second and DragonSpeed's Ben Hanley then set a 3m20.200s to move into third place.

That was as good as it got for the BRE-Gibson BR1 as Hanley's replacement Henrik Hedman soon stopped on track with a suspected gearbox issue that sidelined it for the majority of the session.

That meant the DragonSpeed entry was unable to respond when Rebellion's Thomas Laurent proved to be one of several LMP1 runners able to improve in night conditions.

Laurent's best time, a 3m19.803s lap for third, came after a trip into the gravel at the second Mulsanne chicane.

Ex-Formula 1 driver Fernando Alonso lifted the #8 Toyota TS050 HYBRID from sixth to fourth in the final minutes of the session courtesy of a 3m19.632s effort, narrowly avoiding an off at the Mulsanne on his best run.

That displaced the #1 Rebellion from fifth into sixth behind DragonSpeed after Neel Jani had set its best time of 3m20.327s earlier on.

The second Rebellion finished ahead of the #11 SMP Racing machine and the final LMP1 runner - the #4 ByKolles ENSO CLM-Gibson P1/01.

The #31 DragonSpeed ORECA holds provisional pole in the LMP2 category after an early flier from Pastor Maldonado, but its session was overshadowed by Gonzalez's run-in with Conway, which caused major damage to the front nose section and was due to be investigated by the stewards.

Defending LMP2 race winner Nicolas Lapierre set the quickest time on the first runs for Signatech-Alpine in the #36 ORECA - rebadged as an Alpine A470 - with a 3m26.935s, but that was swiftly toppled on the following tour by Maldonado, whose 3m26.804s remained unchallenged until the end of the session.

Maldonado returned to the track late on after repairs were completed and lapped regularly in the low 3m30s.

Behind the top two, Filipe Albuquerque completed a Michelin sweep of the top three positions in the #22 United Autosport Ligier he shares with Paul di Resta and Phil Hanson.

The lead trio were covered by a little over half a second, with Chatin's fourth-placed IDEC ORECA over a second adrift after recovering from a broken driveshaft to top the Wednesday afternoon practice session.

The best of the Dunlop-shod runners, Ho-Pin Tung in the #26 G-Drive Racing ORECA, was 1.9 seconds off the pace after a late improvement to take sixth over the #28 TDS Racing ORECA driven by Loic Duval, which was hampered by throttle-related problems in practice. 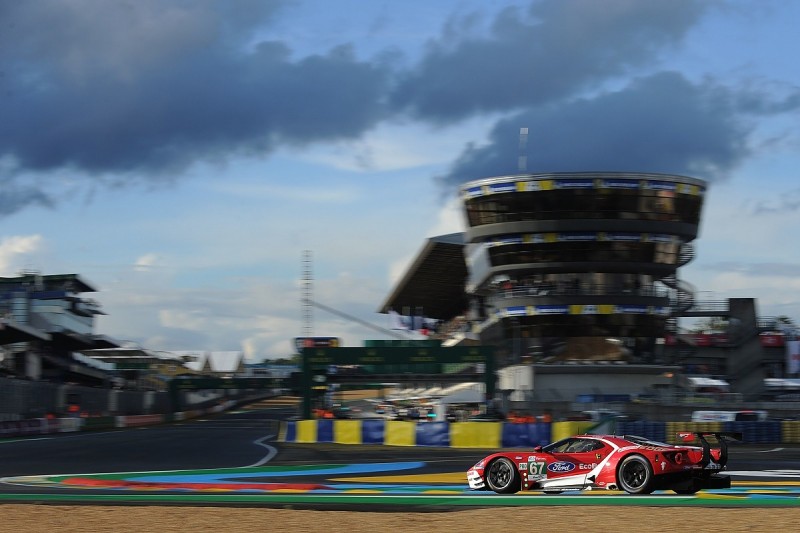 GTE Pro was topped by Ford thanks to a last-ditch lap by Harry Tincknell in the #67 GT.

With around 20 minutes left on the clock, Antonio Garcia had posted a 3m49.467s in the #63 Corvette C7.R, only for it to be disallowed because he improved under yellow flags.

Aston Martin was third-fastest, as Alex Lynn's early best time of 3m50.037s in the #97 Vantage GTE was edged in the closing stages, while the remaining three Porsches - led by Frederic Makowiecki in the #91 car - filled out the top six places in class.

Aston's second car was next up in seventh followed by the best respective entries from Ferrari and BMW, while Corvette's top car ended up 11th after Garcia's time was scrubbed.

A spin for Olivier Pla at the exit of the final Porsche Curve in the #66 Ford put that car 17th and last in class.

The #77 Dempsey-Proton Porsche led the way in GTE Am courtesy of Matteo Cairoli's 3m52.454s, which was enough to top the class by 0.296s from Jorg Bergmeister in the #56 Project 1 Porsche.

Julien Andlauer made it an all-Porsche top three in the #88 Dempsey-Proton machine with a late improvement ahead of the #98 Aston Martin.

The #99 Proton Porsche, severely damaged in Tracy Krohn's practice crash earlier in the day, did not appear on track in first qualifying.