Rebellion Racing led the way in the opening session of free practice for this weekend's Austin round of the World Endurance Championship.

Gustavo Menezes went fastest in the solo Rebellion-Gibson R-13 with a 1m49.957s, which outpaced the best of the Toyotas by just under two tenths of a second.

Sebastien Buemi posted a 1m50.132s in the #8 Toyota TS050 HYBRID, which is the least penalised of the two Japanese cars under the system of success handicaps introduced for this season's WEC.

The #7 sister car, which is penalised by 2.77s compared with the #8 TS050's 2.21s, ended up ninth overall and slowest in the LMP1 field depleted by the absence of the two works Ginetta-AER G60-LT-P1s.

Mike Conway's 1m52.460s in the #7 Toyota left him behind six LMP2 cars in the times at the end of the first of the pair of 120-minute practice sessions on the compressed two-day Austin schedule.

The Toyota's handicaps compare with the 0.55s penalty for the Rebellion after its third-place finish behind the TS050s last time out in the WEC in Bahrain last December.

The United Autosports ORECA-Gibson 07 led the way in LMP2 in third overall with a 1m50.488s Filipe Albuquerque set at the beginning of the session.

Will Stevens got within two tenths of the class leader in the closing minutes with a 1m50.669s aboard the Jota Sport-run Jackie Chan DC Racing ORECA.

Third fastest was Andre Negrao in the Signatech Alpine ORECA on 1m50.954s.

Albuquerque's time was more than three seconds quicker than the fastest LMP2 lap on the WEC's last visit to Austin in 2017.

The improvement in times is at least partially down to the new track surface laid over the winter. 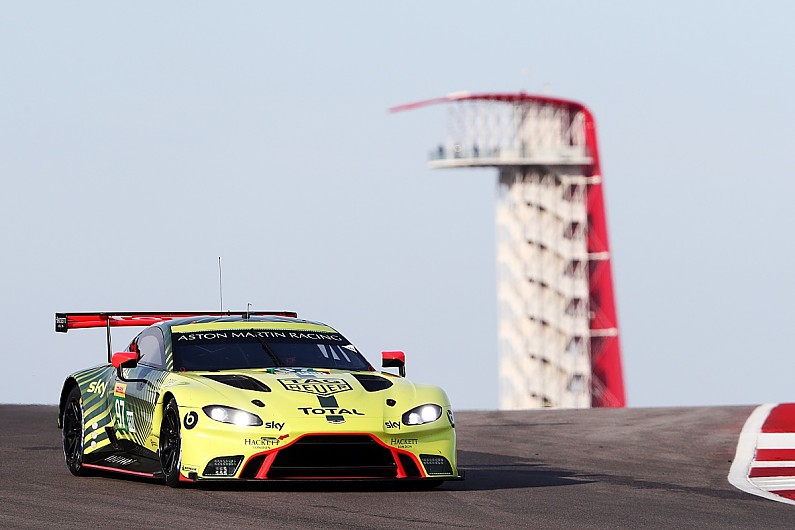 Aston Martin driver Maxime Martin jumped to the top of the GTE Pro order towards the end of the session.

Calado and then team-mate Alessandro Pier Guidi had been fastest for much of the session aboard the #51 car.

The sister AF Ferrari took third on a 2m02.276s from Miguel Molina.

Gianmaria Bruni ended up fourth in the best of the factory Porsche 911 RSRs with a 2m02.440s.

The new mid-engined Chevrolet Corvette C8-R ended up slowest of the 30-car field, behind all 11 GTE Am entries, despite a late improvement from Mike Rockenfeller.

Matt Campbell pipped Dempsey Proton Porsche team-mate Thomas Preining for the top spot in GTE Am in the closing minutes of the session.