Gustavo Menezes and Bruno Senna took the top spot at the wheel of the solo Rebellion-Gibson R-13 by over a second from the best of the works Team LNT Ginettas.

Senna said: "For the conditions it felt the car was gripping better [than in free practice], but I felt that I still left something on the track today."

The #6 Ginetta-AER G60-LT-P1 qualified by Charlie Robertson and Mike Simpson ended up 1.2s in arrears of the Rebellion on a 1m47.092s average.

The second of the Ginettas, in which Egor Orudzhev and Ben Hanley ended up third, was less than two hundredths behind their team-mates.

Kamui Kobayashi and Mike Conway took fourth spot in the best of the Toyota TS050 HYBRIDs, which are carrying penalties under the new system of success handicaps designed to slow them by 2.74s a lap.

The drivers of the #7 Toyota ended up with a 1m47.235s average, which put them nearly a second up on the sister car qualified by Kazuki Nakajima and Brendon Hartley.

Their 1m48.649s average just edged out Jackie Chan DC Racing ORECA qualified by Will Stevens and Gabriel Aubry, which ended up on 1m48.775s average.

The United Autosports ORECA took third in the hands of Filipe Albuquerque and Phil Hanson. 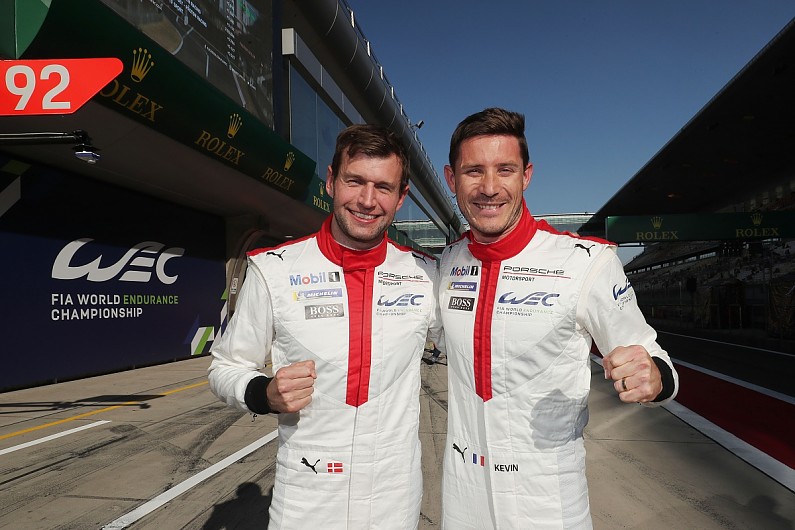 A lap from Kevin Estre that was four tenths quicker than anyone else in the class propelled the #92 Porsche 911 RSR to the top of the GTE Pro times.

Team-mate Michael Christensen's 2m00.134s left the car sixth and last in class, before Estre put in a 1m59.024s to leapfrog the car onto the class pole.

Their 1m59.579s average gave them the top spot ahead of the Aston Martin Vantage GTE shared by Nicki Thiim and Marco Sorensen by just 0.018s.

Thiim topped the times after the first runs with a 1m59.708s before Sorensen went three tenths faster with a 1m59.486s on the same set of tyres.

That gave them a 1m59.597s, which was just one hundredth up on the sister car of Maxime Martin and Alex Lynn.

The two Ferrari 488 GTE Evos took fourth and fifth positions, the 1m59.687s average from James Calado and Alessandro Pier Guidi putting them four tenths up on the sister car of Davide Rigon and Miguel Molina.

Matteo Cairoli and Egidio Perfetti took the GTE Am pole in their Project 1 Porsche.