The #7 Toyota continued to tighten its grip on the Le Mans 24 Hours through the 18th hour.

Mike Conway emerged from the pits after taking over the car from Jose Maria Lopez at the beginning of the hour with a lead of just over a minute and a half.

The Briton lost approximately 10 seconds to the chasing sister car with Kazuki Nakajima at the wheel during a slow zone caused by Gustavo Menezes beaching the #3 Rebellion-Gibson R-13 in the Porsche Curves gravel.

Conway was able to re-extend the gap after the race went green and gained more time through the next pitstop sequence.

That took the cushion back up to more than 90s and he then edged away into a lead that stood at 1m38s at three-quarter distance.

Menezes lost the Rebellion at the end of the double-left section of the Porsche Curves as he was chasing Stoffel Vandoorne in the #11 SMP Racing BRE Engineering for third and ended up in the gravel at the entry to the long right-hander.

The car was eventually extracted from the gravel, made it back to the pits and was taken into its garage.

The combined loss of time dropped the Rebellion two laps down on the BRE-AER BR1. 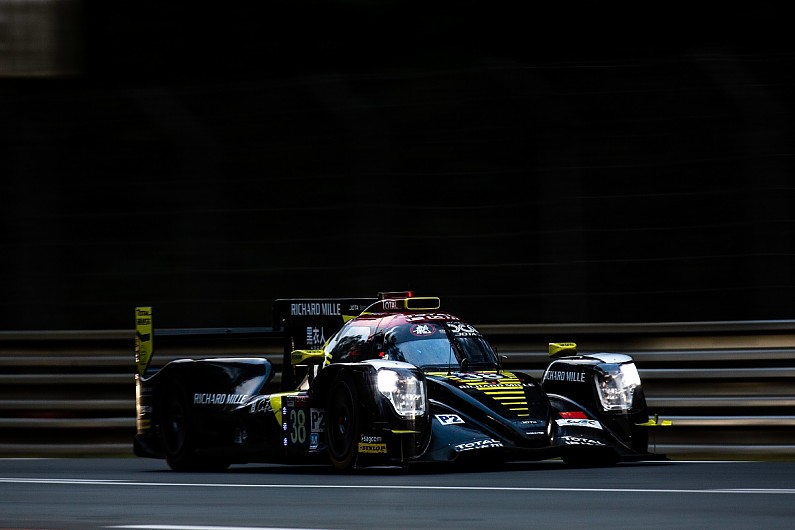 Having lost over a minute, Aubry pitted and the lack of work done on the car and its swift return to the track suggested the problem was that he was close to running out of fuel.

The time loss allowed Francois Perrodo to close in to within 15s of third place briefly before he was baulked by traffic.

Ho-Pin Tung made a promising start once he was in the #38 car to extend the gap back up to over a minute and tighten the Jota-run squad's grip on third.

The top two positions remained constant, with Roman Rusinov heading the pack in the G-Drive Racing ORECA by over three minutes ahead of the Signatech Alpine of Pierre Thiriet.

Duqueine Engineering continued to claw its way through the field, this time with Pierre Ragues driving, and passed the United Autosports Ligier of Phil Hanson, as well as winning a close scrap with the IDEC Sport ORECA of Memo Rojas to run fifth.

GTE - Nothing to choose between Corvette and Ferrari

The GTE Pro battle ebbed and flowed between the lead entries from Corvette and Ferrari, with the top two cars on divergent strategies.

Just shy of the 18-hour mark, Daniel Serra pitted the #51 Ferrari to hand over to Alessandro Pier Guidi, who rejoined a little under 10s behind the #63 Corvette of Mike Rockenfeller.

Porsche continues to hold positions three and four in class, with the #93 Porsche - now in Earl Bamber's hands - leading the #91 car of Frederic Makowiecki.

In GTE Am, Jeroen Bleekemolen took over from Ben Keating in the #85 Ford GT, stretching that car's advantage to nearly three minutes over Jorg Bergmeister's Project 1 Porsche.