Toyota lost its shot at a first victory in the Le Mans 24 Hours in devastating circumstances, handing Porsche a second consecutive win in the closing minutes of the race.

The #5 TS050 led the race by 1m24s inside the final 10 minutes, but with just over five minutes of the 24 hours remaining Kazuki Nakajima slowed, reporting that he had no power.

As the Toyota attempted to crawl around to the finish, Neel Jani blasted by in the #2 Porsche 919 Hybrid to snatch the lead and complete one more lap to take an unexpected victory with Romain Dumas and Marc Lieb.

Nakajima initially stopped the car on the pits straight, after the start/finish line, eventually rejoining to complete his final lap in 11m53s, crossing the line second.

However, moments after that the #5 car he shared with Sebastien Buemi and Anthony Davidson was removed from the timing screens, with its final lap being too slow to make it eligible to be classified.

That promoted the #6 Toyota of Mike Conway, Stephane Sarrazin and Kamui Kobayashi to second, and enabled Audi to maintain its record of always finishing on the podium since its debut at Le Mans in 1999 with the #8 car of Lucas di Grassi, Loic Duval and Oliver Jarvis.

Nakajima had held Jani at bay to the tune of 30 seconds over the final part of the race, with that gap increasing when the Porsche pitted in the final quarter of an hour due to a slow puncture.

The #5 car played second fiddle to the #6 TS050 HYBRID in the first half of the race, as Toyota established a strategic advantage over its rivals by being able to go one lap longer between pitstops, achieving 14-lap stints.

But the #5 kept itself in contention and was catapulted into a three-way lead battle with its sister car and the leading Porsche in the early hours of Sunday morning.

Nakajima and Davidson hauled the car back into contention, but it was Toyota's decision to pit both of its cars during a safety car period in the 17th hour that aided the #5's charge, and Buemi pounced on team-mate Mike Conway shortly after the restart.

The battle between the three leaders showed no signs of relenting as the hours ticked down, and depending on pitstops at times the top three cars were covered by just a handful of seconds.

The #6 Toyota eventually fell out of contention with less than three hours to go following a spin for Kamui Kobayashi at the Porsche Curves and a subsequent precautionary stop to fix some bodywork damage that was picked up in contact with a backmarker in the night.

That left the #5 Toyota battling the polesitting #2 Porsche - which had its strategy disrupted in the night when it suffered a puncture with Marc Lieb at the wheel - and Davidson passed the 919 Hybrid track just before 11am.

Following that pass and the pitstops that came shortly afterwards, Davidson then extended his advantage over the Porsche to more than one minute, which was roughly halved when the lead car made its final driver change to put Nakajima back in.

While Toyota's misfortune handed the #8 Audi a podium finish, the dominant manufacturer of this race in the 21st century had a 2016 event to forget, with its lead car finishing nine laps down.

Loic Duval briefly fought for the lead following the safety car start that was caused by rain, but his pace fell away towards the end of his opening stint in the car, and from then on the #8 Audi was never a contender.

The #7 Audi also briefly featured at the front thanks to an inspired call to be the first major player to switch to slicks after the restart, but Andre Lotterer pitted two laps later for a time-consuming turbo change that ruined its hopes in just the second hour.

The #8 Audi was running two laps down until it struck serious problems of its own in the 20th hour, when a brake disc defect on the front right damaged other parts of the car and led to a suspension change on that corner, costing the car 39 minutes.

Audi then called in the #7 car, which had recovered to fifth overall, for precautionary brake disc checks, losing that entry another 10 minutes.

The other factory car to fall out of contention was the #1 Porsche, which had two visits to the garage of more than one hour apiece through the night in a bid to solve high engine temperatures.

The LMP1 privateer cars endured a troubled race, with only the #12 Rebellion entry reaching the finish 54 laps down after several lengthy visits to the garage, while its sister #13 car retired and the ByKolles CLM caught fire during the night. 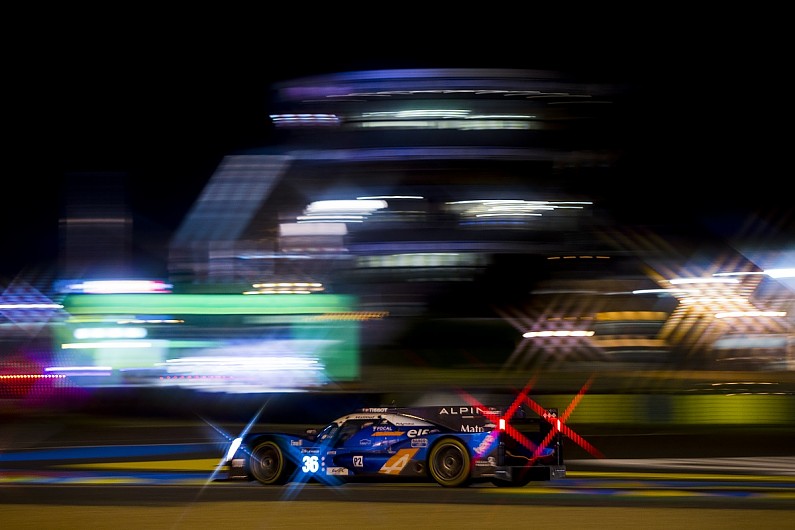 Lapierre led very early in the race, but was left on wets for too long as the track dried and others switched to intermediates and fell out of the top 10 initially.

Matt Rao's lead disappeared before a spin, and then the car failed to restart in pitlane after Rao suffered a puncture from contact with a bollard.

That cost Manor 11 laps across the seventh and eighth hours and any chance of victory, but it continued to race until Rao crashed in the 21st hour, when bodywork folded under the front of the ORECA approaching Porsche Curves, following an off-track moment at Indianapolis.

Thiriet by TDS Racing controlled affairs for a quarter of the race after Ryo Hirakawa claimed the lead from Rao in the fifth hour.

Pierre Thiriet led Lapierre by nearly three minutes at midnight after safety car timing worked in its favour, but the next safety car period and a very slow stop for TDS meant the balance shifted in Signatech's favour.

The Thiriet ORECA, then second, and fourth-placed Baxi DC Racing Alpine with Nelson Panciatici behind the wheel both crashed out during the 17th hour, handing control of the race to Signatech.

It spent the final quarter of the race essentially one lap clear of the rest of the field, with Lapierre crossing the line to record his second LMP2 Le Mans victory in as many years, following his 2015 triumph with KCMG.

G-Drive's ORECA started from pole with Rene Rast, but lost ground during Saturday afternoon's change to intermediate tyres, then suffered a puncture and later had to serve two pitlane penalties.

Vitaly Petrov led the #37 SMP Racing BR01 to the final podium position, ahead of Strakka Racing's Gibson and the ORECAs of Eurasia Motorsport and Greaves Motorsport, a spread-out top six covered by 10 laps.

GTE PRO - FORD WINS ON ITS RETURN
By Scott Mitchell 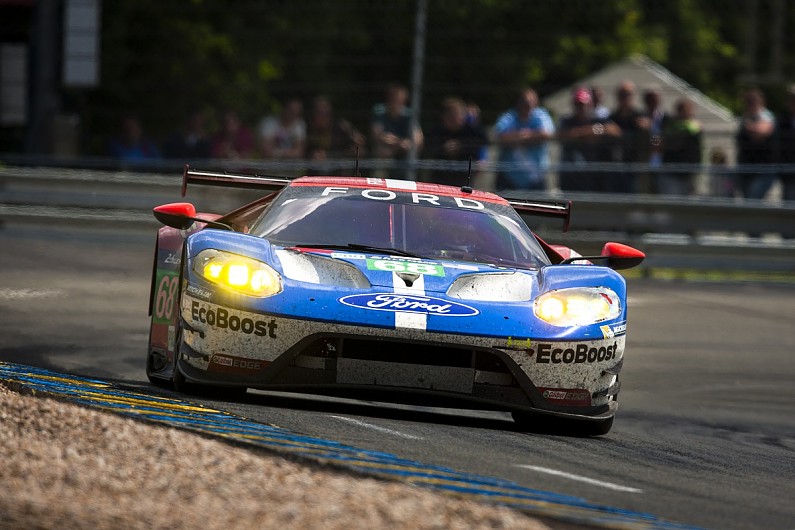 Ford claimed victory in the GTE class on its return to the Le Mans 24 Hours.

Porsche took a surprise early lead through Frederic Makowiecki as the GTs briefly dropped down the order in the wet, but by the third hour Ford was back on top.

Richard Westbrook led the fightback in the #69, assuming the lead as Dirk Muller brought the #68 into contention before several protagonists began to fall.

James Calado damaged his AF Corse Ferrari's sump on a kerb, delaying that #51 488 GTE significantly before it eventually retired with overheating issues, while the #91 and #92 Porsches were neutered by a damaged radiator and a broken rear suspension respectively.

AF Corse's second entry retired after a rim failure caused Davide Rigon to crash, and in the factory team's absence the Risi Competizione Ferrari engaged in a three-way fight with the #68 and #69 Fords.

After gaining back some time in the 10th hour, Risi led once the two Ganassi cars had their brakes changed, and stayed in front with a quicker service.

By dawn the Ferrari had established a 20-second lead, only for a safety car to bring the #68 Ford back into contention again.

After a cat-and-mouse game the Ferrari eventually succumbed to the Ford's pressure in the 20th hour when Hand caught and passed Matteo Malucelli - after Muller had slashed a 40-second deficit following a drive-through penalty in the previous stint.

A spin from Toni Vilander in the following hour allowed the #68 to escape and ultimately enjoy a comfortable finish, while the Ferarri's focus switched to keeping the #69 Ford at bay.

It did, but ignored a stop-go penalty repair leader lights and faces a post-race sanction that could hand Ford a podium lockout.

The #66 Ford recovered from an early electrical issue to fourth on the road and, as the IMSA Fords and Ferrari are ineligible for WEC points, a maximum championship score.

Ford's #67 entry was wheeled off the grid before the start with a gearbox problem and had an unreliable and incident-ridden run to ninth in class.

Aston Martin Racing's lead Vantage ran fourth for much of the race but lost that place, which could have become third thanks to the late Risi penalty, to a puncture and wound up fifth.

To add to the attrition, only one of the works Chevrolet's finished after Tommy Milner crashed the #64 Corvette C7.R heavily on the approach to the Dunlop chicane in hour 16.

GTE AM - FERRARI CLEANS UP
By Jack Cozens 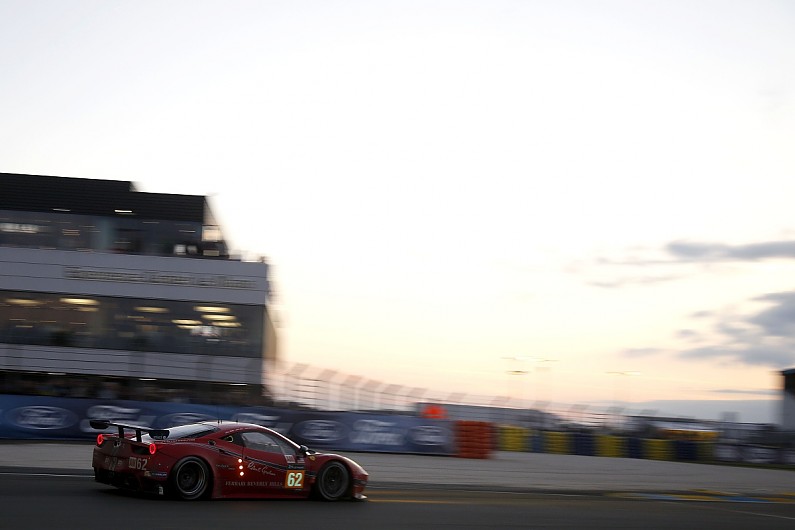 The #62 Scuderia Corsa Ferrari 458 of Bill Sweedler, Townsend Bell and Jeff Segal won the GTE Am division in crushing style, lapping all but one of its rivals.

Bell started a lowly ninth of 13 cars but, under the safety car start, was part of a group of Am cars that opted to pit for intermediates as the track dried out and made quiet progress as the Porsche cars dominated the early proceedings.

But as the majority of those cars fell away from the fight for the lead into the night, Bell - who succeeded team-mate Sweedler on Sunday morning - set a devastating pace to catch, overhaul and pull away from the leading #88 Abu Dhabi-Proton Racing Porsche.

Further stints from Segal and Sweedler left the Ferrari a lap clear of its rivals by mid-morning, and although the three backed off in each of their final shifts, Segal crossed the line with the best part of a minute in hand over the second-place car.

The #83 AF Corse team was its closest challenger at the finish and made it a Ferrari 1-2, with 24 Hours veteran Emmanuel Collard charging in his final stint to claim second from the #88 car.

David Heinemeier Hansson faded towards the end in the #88, with he and team-mates Patrick Long and Khaled Al Qubaisi finishing a subdued third having led for much of the race.