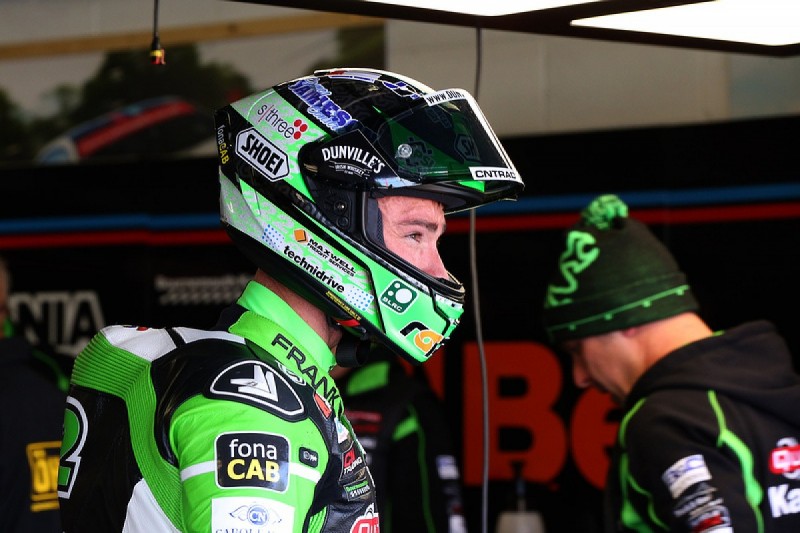 Irwin won the previous three SBK races at the NW200 aboard a Ducati, but struggled for speed on Tuesday on the Bournemouth Kawasaki and was four seconds off the pace in seventh.

Irwin was cast 2.6s adrift by this, but produced a 4m21.767s in the closing stages to take pole from Harrison, while arch rival Alastair Seeley put his Paul Bird Ducati V4 R into third.

Tuesday's Supersport pacesetter Seeley (EHA Racing) held onto pole by virtue of his 4m37.073s from the first session, with the 24-time NW200 winner shadowed by Johnston and Harrison.

Honda's David Johnson caused the second stoppage after a crash, and has been taken to hospital as a precaution. He missed the SBK session as a result.

Hickman encountered several technical issues with his BMW in the SBK session, and was left in 39th - though his 4m30.021s from Tuesday was good enough for 12th in the combined order.

He had no such issues in the Superstock session, with last year's class winner guiding his S1000RR BMW - which only had its first run out in STK trim in Tuesday's session, which he topped - to pole, securing top spot for Thursday night's first race with a 4m23.604s lap just a second outside of the class record.

Irwin's upturn in form on the ZX-10RR extended into the STK session and he qualified second, with team-mate Hillier benefiting from his tow to complete the top three.

A crash for Craig Neeve towards the end of the session resulted in a red flag, but he escaped unscathed.

Jamie Coward, on the KTS machine, sealed pole for the Supertwins class courtesy of his Tuesday lap of 4m57.829s, putting him two tenths out of reach of Rutter.

Derek McGee topped Thursday's Supertwins session with a 4m56.492s, though this only put him third on the combined timesheets, with Irwin [KTS] and Stefano Bonetti [Paton] rounding out the top five.

McGee's KMR team-mate Jeremy McWilliams suffered an engine issue on his Kawasaki on Tuesday, and crashed at the start of Thursday's running at the Magerabouy chicane.

The former MotoGP racer's 5m00.442s from first qualifying was good enough to put him seventh on the grid, and the double NW200 winner is expected to be granted dispensation to start owing to his experience despite no completing the required five laps on the bike to qualify.