Dean Harrison topped the opening night of Superbike running for the 2018 Isle of Man TT, while Peter Hickman and Ivan Lintin were fastest on the Superstock and Supersport timesheets 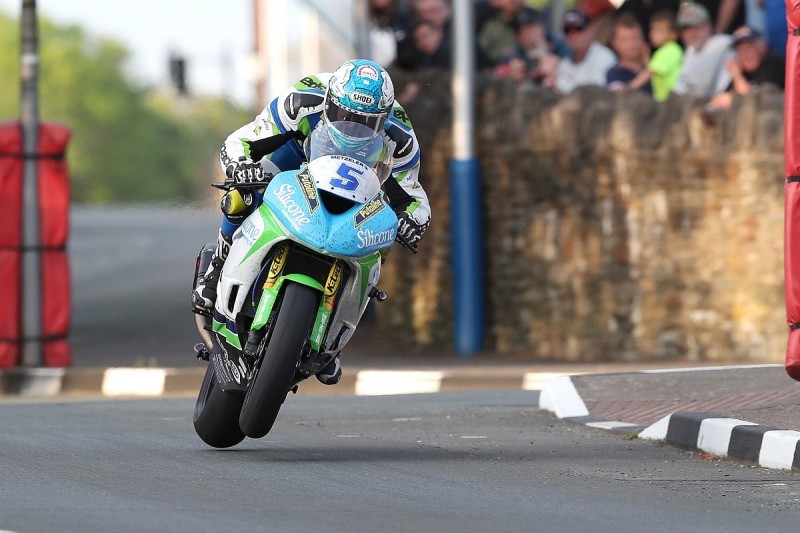 The opening Superbike and Superstock session of the week was delayed by 20 minutes, after a spectator got onto the course at Crosby section, and eventually started at 1840 local time.

Michael Rutter [Bathams BMW] and Manxman Dan Kneen [Tyco BMW] were the first down the road at the start of the session, with Harrison not far behind.

Harrison - who was fastest on Saturday in the Supersport session - led the way on his Silicone Engineering Kawasaki Superbike at the first timing section at Glen Helen.

He remained unchallenged as he completed his opening lap, setting an initial pace of 17m22.970s at 130.232mph ahead of Tyco BMW's Michael Dunlop.

Dunlop pulled into the pits at the end of his opening lap to switch to his spare Superbike, but bailed out of the lap at Quarterbridge and made his way back to the paddock via the public roads.

Conor Cummins started the session on his Superstock Padgetts Honda, and led the class timings at the end of his first lap with a time of 17m39.670s at 128.180mph, which put him third overall.

Cummins switched to his Superbike for the final 20 minutes of the session, but stopped at Ballacraine.

Harrison's 131.376mph lap stood as the best in the Superbike class and overall through to the end of the session, with Dunlop - who was able to re-join the action - second ahead of Smiths Racing BMW rider Hickman.

Ian Hutchinson, a 16-time TT winner, was 16th in his first Superbike session on the Isle of Man since the leg-breaking crash he suffered in the Senior TT last year.

Kneen, David Johnson and Harrison completed the top five. Devitt Racing's Lintin was comfortably fastest in the Supersport timings on his Kawasaki with a 123.563mph lap at 18m19.264s.