Peter Hickman dominated the postponed Isle of Man TT Superstock race on the brand-new S1000RR BMW to score his second win of the day on Thursday.

The race had been pushed back from Monday to Thursday and shortened to three laps following weather delays.

Hickman, who won the Superbike race on a hybrid STK BMW earlier in the week, took the lead early on and led Harrison by 1.6 seconds on the run to Glen Helen, with James Hillier slotting into third.

The Smiths Racing rider continued to put distance between himself and Dean Harrison on the time sheet across the opening tour, and held a lead of nine seconds as he entered the pits for his fuel stop.

The Silicone Engineering team managed to service Harrison two seconds quicker than Hickman's crew, with the gap splitting the pair down to 5.8s at Glen Helen on lap two.

But Hickman had re-established his original nine-second lead at Ramsey, and was 16.5s clear as he thundered through the Grandstand start/finish area to begin his final tour.

Harrison failed to make any inroads on Hickman on the last lap, with the Smiths rider moving 26s clear over the mountain.

He maintained this gap to the chequered flag for his second-successive STK TT win as he eased to a hat-trick of TT wins in 2019. 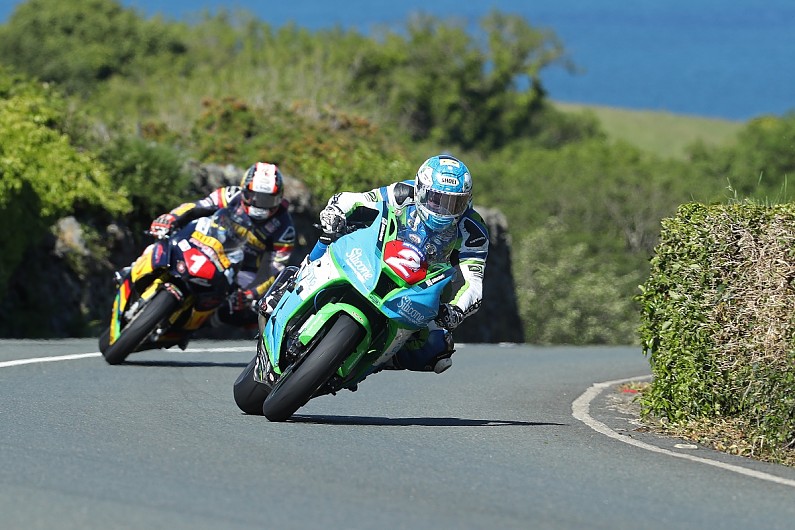 Harrison secured a second runner-up spot on Thursday after he also finished behind Hickman in the Superbike race.

David Johnson locked horns with Michael Dunlop over the final podium place, with the Honda rider edging ahead of the 18-time winner by seven tenths on the run to Glen Helen on the final lap.

Dunlop fought back on his MD Racing BMW to retake 0.6s, before moving back into third with an advantage of four tenths as they started the climb over the mountain.

But Johnson dug deep over the rest of the lap and snatched a maiden TT podium by just 0.2s from Dunlop at the finish, with Conor Cummins (Padgetts Honda) completing the top five.

Michael Rutter got the Bathams BMW home in sixth ahead of Hillier (Bournemouth Kawasaki), who dropped out of the podium fight when he was hit with a 30s penalty for pit lane speeding.

Honda's Ian Hutchinson was a non-starter.