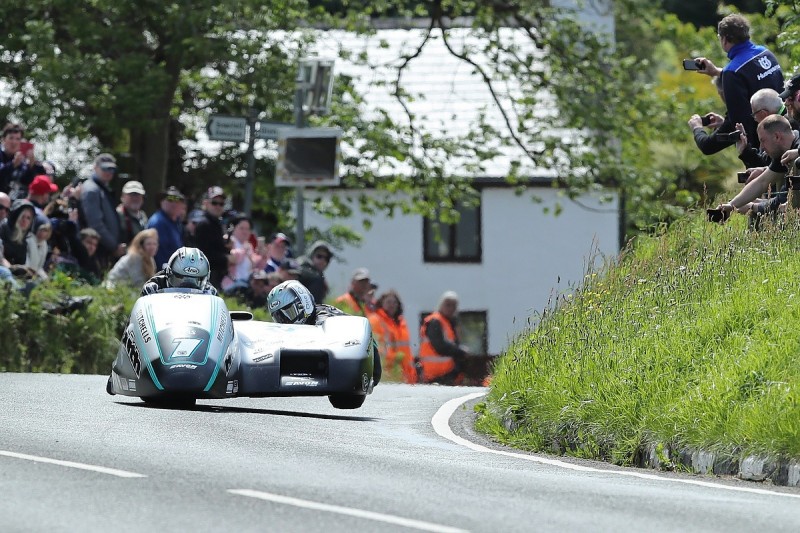 Originally scheduled for Friday morning, the second Sidecar outing was moved forward to Thursday afternoon due to the threat of rain, with the Birchall brothers once again untouchable on their LCR/Haith machine.

The Birchalls held a slender lead of a second on the run through Glen Helen on the opening lap, with Sidecar race one runners-up John Holden and Lee Cain their nearest challenger.

The Silicone Barnes Racing outfit piloted by Holden managed to reduce their deficit by a tenth, although then lost 2.6s to the Birchalls at Ramsey.

That gap opened up to 6.2s over the mountain at the Bungalow, before the Birchalls gouged another four seconds as they crossed the line to begin the second tour.

The Birchalls' continued to twist the knife on Holden and Cain across the final lap, opening their lead to 13s at Glen Helen before extending that to 16.7s as they started the climb up the mountain.

They took the chequered flag with 20.5s in hands to score their 10th TT win to equal Sidecar legend Rob Fisher, making them joint-second most successful in the class.

Holden and Cain took a 12th-successive podium finish in second, with the rostrum completed by Peter Founds and passenger Jevon Walmsley on the Rowtec Engineering outfit.

After dropping out of race one with an issue, Tim Reeves and Mark Wilkes (Tim Reeves Racing) were 2m03.702s off of the Birchalls in fourth, with Gary Bryan and Philip Hyde on the GBM UK machine completing the top five.

Dave Molyneux and passenger Harry Payne suffered another mechanical issue in the second Sidecar race, though 15-time TT winner Molyneux was able to get his DMR outfit to the chequered flag in eighth behind the Lewis Blackstock/Patrick Rosney (Barnes Racing) and Estelle Leblond/Frank Cleys (Optimark Road Racing) outfits.

TT newcomers Ryan and Callum Crowe impressed on their debut on Monday with fifth place, but were unable to start the second race due to mechanical problems with their Haven Homes machine.