Craig Lowndes played a pivotal role in turning Triple Eight from a team of "nobodies" into the Australian Supercars powerhouse it is today, says team manager Mark Dutton

Lowndes will retire from full-time Supercars action at the end of this season, having driven for Triple Eight since 2005.

He joined the team as a three-time champion just over a year after the British outfit had taken ownership of the unfancied Briggs Motorsport squad, with team boss Roland Dane talking Lowndes into moving from Ford Performance Racing.

That came at the same time as Triple Eight's surge to the front of the Supercars field, with Lowndes winning the team's first race in 2005 and teaming up with Jamie Whincup to win its first Bathurst 1000 crown a year later.

Whincup is now an eight-time series champion, while Lowndes has six Bathurst wins to his name.

"When we were the little engine that could, a small team trying to be legit, trying to get some trophies... even when we went from Briggs to Triple Eight we were still nobodies," said Dutton.

"When Craig joined the team, it was a massive leap of faith from him. Good on Roland for being able to [make Lowndes] see what Triple Eight would be able to do.

"It gave us a level of respect straight away in the paddock that someone of his stature would join the team. 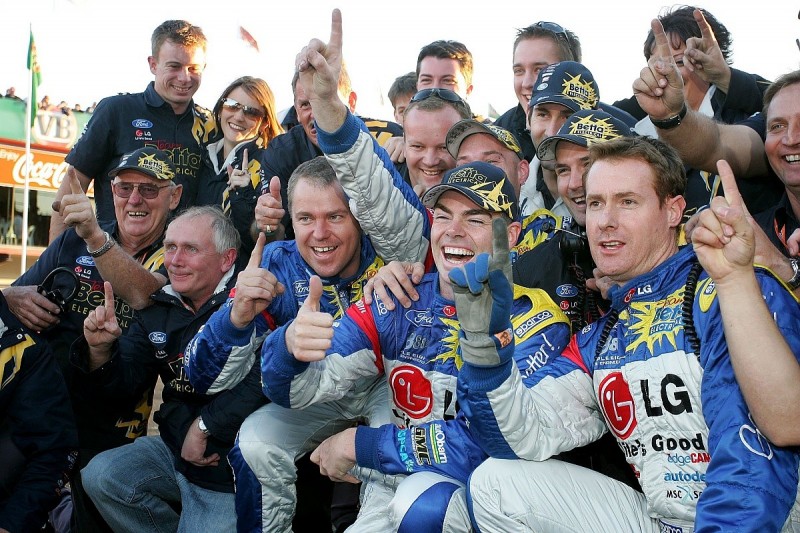 "It was a pretty proud moment when you're a small team that hadn't had much success, to then get that person. Everyone stepped up at the time, and wanted to work harder and harder to show that he made the right call.

"It definitely was a turning point for Triple Eight. I don't think we'd be where we are without him being part of the team at all."

Dutton said it would be sad to see Lowndes stepping down as a full-timer.

"I knew the announcement was coming, but jeez it was sad," he said.

"It was pretty emotional when both Roland and Lowndsey were announcing it privately to the team before they did it publicly.

"It's sad. It's the right time, everything makes sense, and there's no doubt that it's the right decision for Craig, for the team, for everyone together.

"It's been done really well, but you can't help but shed a tear."

Dutton added one frustration was that Lowndes had not won a title during his time at Triple Eight, despite finishing in the top four in the standings in all but one of his season's with he squad.

"It would be a dream come true to give him a championship in his final full-time drive," said Dutton.

"That's the only thing we haven't been able to give him in his time with Triple Eight, and it tears me apart.

"We'll be working hard all year. There are numbers than make it very difficult, but we don't worry about that. We'll go hard and it will sort itself out."