Shane van Gisbergen has secured his maiden Supercars title, despite a chaotic run in the opening race of the Australian series' finale at Homebush

Van Gisbergen entered the weekend, the last event at the Sydney 2000 Olympics site, leading Triple Eight team-mate Jamie Whincup by 191 points with 300 up for grabs.

He duly qualified on pole, with Whincup second, but slipped back to sixth place with a slow start, and then turned outgoing champion Mark Winterbottom around at Turn 9 on lap nine of the 74.

That earned van Gisbergen a drive-through penalty that dropped him to 18th place, while Whincup controlled proceedings at the front.

Triple Eight delayed van Gisbergen's second pitstop, which worked out perfectly when the safety car was brought out with 24 laps to go after Dale Wood's Nissan found the wall.

On fresh tyres and with the field compressed ahead of him, van Gisbergen sliced his way from ninth up to third over the remaining laps, including passing James Courtney on the final tour.

While Whincup claimed his seventh win of the season ahead of Garth Tander, third was enough for van Gisbergen to seal the championship with one race to spare. 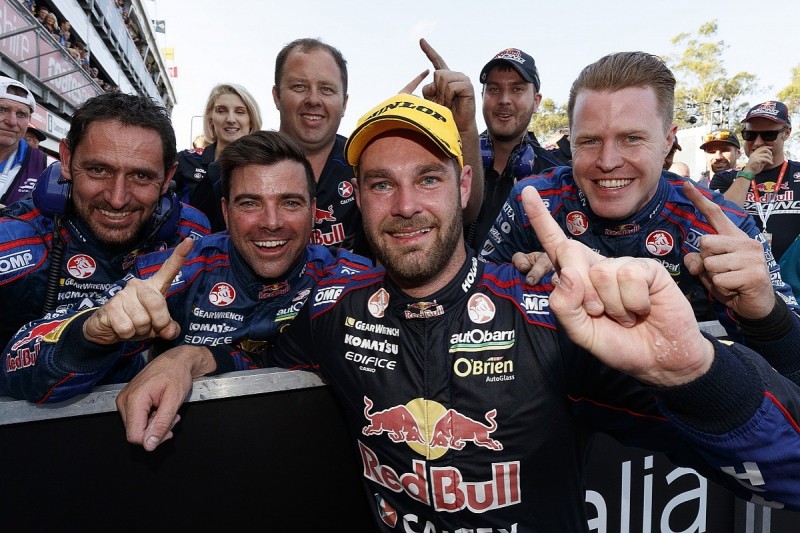 "We knew we had a job to do today and we started the right way with pole position in qualifying," van Gisbergen said.

"I wasn't as assertive as I should have been at the beginning of the race and after the penalty, we knew we had our work cut out for us.

"When the safety car came out we were back in the running for a good result and we pushed hard to finish in third.

"It's been an awesome few years in the Supercars series and taking the championship has always been a lifetime goal so I'm stoked.

"It's going to take a little time to sink in, I'll have a quiet dinner with the family tonight and then celebrate with the team tomorrow."

Having won seven races amid a total of 17 podium finishes this year, van Gisbergen is the first New Zealander to win the Australian Touring Car Championship since Jim Richards in 1991.

The title goes with the 2016 Blancpain Endurance crown van Gisbergen won with McLaren's Garage 59 alongside Rob Bell and Come Ledogar.

Van Gisbergen made his Supercars debut in 2007 and joined the powerhouse Triple Eight Holden outfit at the start of this year when it added a third car, after winning races with Tekno Autosports and Stone Brothers Racing.

The season concludes with a second, 74-lap race on Sunday.