Supercars driver Jack Perkins has revealed that he had a stroke when he was just 29 years of age.

The remarkable turn of events happened back in 2016, a loss of feeling in one of Perkins' hands later diagnosed as a stroke after he admitted himself to hospital.

The second-generation star kept the medical episode largely secret in the five years that followed, only going public now as he looks to do some charity work with the Stroke Foundation.

It's the second significant health-related challenge faced by the 34-year-old, who was diagnosed with Type 1 diabetes back in 2006.

"I woke up and I had an ill feeling in my hand," Perkins told Autosport.

"We worked out in hospital later that day that I had a blood clot on my brain, which is a stroke. It was a lot to come to terms with at that age, it's not something you're familiar with in your 20s.

"It was kind of a paralysis feeling, like when you sleep with your head on your hand it goes numb. It usually doesn't take long for the feeling to come back, but in this instance it was hours later and more of a pain from my fingers up to elbow.

"I went to work and it wasn't getting better, so I started to get concerned. I took myself to hospital to get a bit of an understanding on what it could be.

"They did a lot of tests and then I met with a neurologist. They did a few more tests that confirmed what he suspected based on his experience. And he was spot on."

At the time Perkins was regularly competing in both the Australian Sports Sedan series and in Supercars as an enduro driver with the Holden Racing Team.

However the stroke had little direct impact on his racing, with most feeling coming back to his hand within days of the stroke, and rest over the course of roughly a month of rehabilitation work.

However he does admit it's never quite been the same as it was before the stroke.

"You feel almost back to normal that day," he said. "But my hand and arm needed a bit of rehabilitation. 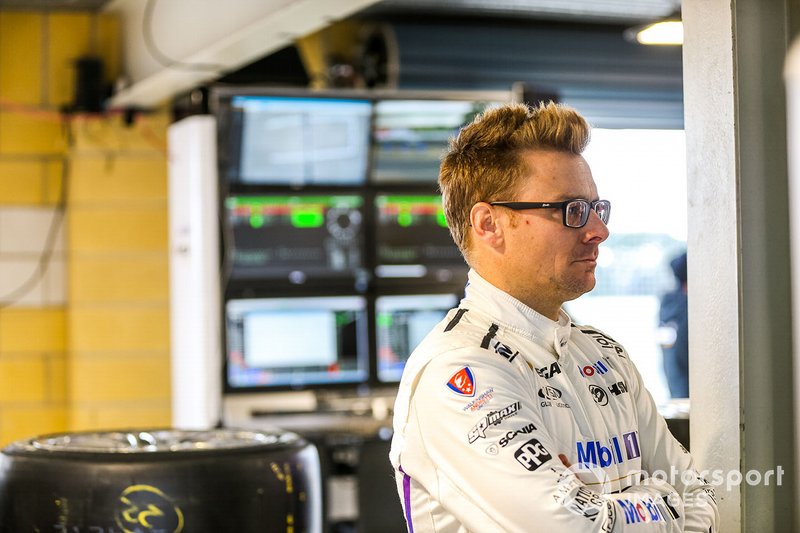 "Ninety or 95 per cent of it came back when I was in hospital and over time the last few per cent have improved.

"I'm 99.99 per cent [recovered] now, but every now and then there's a feeling in my hand that I know isn't the same as it was before the stroke. But I'm not short of any functionality, which is great."

As for keeping the stroke a secret, Perkins added: "I'm not one of those guys that takes selfies from the hospital bed or look for any instant publicity. I like to keep my life a bit low-key and keep on top of things with my medical team. And this was no different.

"For me there's an element of over reaction when you talk about certain health things. Having been through the diabetes stuff almost 10 years to the day earlier, I didn't need an over reaction to what had happened. You just need to analyse what happened and how you fix it.

"My medical team around me were confident that the risk of anything causing any more side effects was quite low. And my recovery was fantastic. So I chose not to talk about it.

"But I constantly read stories about people who have strokes that hinder their lives, and after nearly 15 years of diabetes charity work I felt my position could help others.

"And that's what it's about for me. It's not a publicity grab, it's to try and promote a charity and a cause."

He also says that motorsport has been crucial to how he's navigated two serious health conditions over the past 15 years.

"There's people worse off than me. I'm fortunate that what I've gone through I've been able to manage," Perkins said.

"Motor racing is a great motivator for me, because you can just give up. The hardest thing was when the neurologist told me I could cash in my life insurance. That's when it really hit home that this was a serious deal.

"But motor racing is worth more than money to me, so that's been a tremendous motivator."

Perkins will make his 16th consecutive Bathurst 1000 start later this year when he lines up alongside Will Brown at Erebus Motorsport.