Starting from pole, the Kiwi ceded critical track position by being out-dragged by Cam Waters into Turn 1.

Van Gisbergen was clearly able to match the leading Tickford Mustang for pace, but, facing aero wash, was unable to find a way through.

That made the stops crucial, van Gisbergen opting to take his first service on Lap 14. Waters followed suit a lap later but his Tickford crew unable to get him out fast enough to stop van Gisbergen from charging into the lead.

Once in front it was a flawless display from van Gisbergen, who pulled 4.2s over Waters across the second stint.

He and Waters then pitted together on Lap 23, before van Gisbergen eased his advantage out 6.1s by the finish. 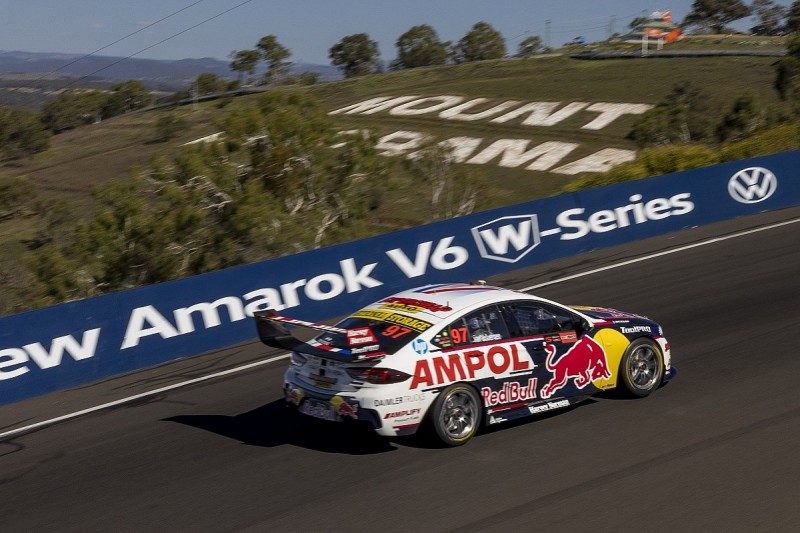 Speaking post-race, van Gisbergen said the middle stint was one of the best he's ever done - as well taking a cheeky jab at Waters' Monster Energy backing.

"It's a team win, a strategy win," said van Gisbergen.

"Unfortunately you can't battle on track so we had to try to win it in the pitlane, and we did.

"That middle stint was just insane, it was so good to have such a good car and just push in clean air. It was qualifying laps the whole time and I was watching a sub-par energy drink get smaller in the mirror. It was awesome."

Chaz Mostert made it two podiums for the weekend with a well-crafted third place. The Walkinshaw Andretti United driver had to pass a pair of Dick Johnson Racing entries along the way, charging by Will Davison in the first stint.

He then pressured Anton De Pasquale into a mistake on his out-lap after his first stop, a moment at The Chase on cold tyres for the DJR driver opening the door for Mostert to get by.

De Pasquale went on to finish fourth, while team-mate Davison slipped back down the order in the final stint. First he was jumped by Mark Winterbottom during the second round of stops, before locking the rears at the last corner a few laps from home, which let Jamie Whincup into sixth.

Scott Pye finished the race eighth ahead of Andre Heimgartner, with Nick Percat rounding out the Top 10.

The only non-finisher was James Courtney, who backed his Tickford Mustang into the wall at The Cutting on Lap 9.

Van Gisbergen now holds a 33-point lead over Mostert in the standings.