Cam Waters and Will Davison will start from pole for the 2020 Bathurst 1000 after Waters' #6 Tickford Mustang produced a stunning lap in the single-lap top 10 shootout.

After qualifying fourth fastest in Friday's session which set the grid for positions 11-25, Waters was the seventh driver to go in the session and became the only driver to break under the 2m04s barrier.

Mistakes from Red Bull Holden drivers Jamie Whincup and Shane van Gisbergen took them out of the running for pole, while even one-lap master Scott McLaughlin couldn't get within 0.44s of Waters in the DJR Team Penske Mustang.

When provisional polesitter Lee Holdsworth failed to switch on the front tyres of his Tickford Mustang, it confirmed Waters would take his first Bathurst pole, bettering his best effort of third from 2019.

"That was absolutely awesome," said Waters.

"I knew the car had something special in it, I just had to put it all together.

"I made a few little mistakes, but the car was just hooked up."

Defending Bathurst winner McLaughlin was best of the rest in second, the recently-crowned triple champion qualifying the car he'll share with Tim Slade 0.01s quicker than the lead Holden of Mostert/Warren Luff. 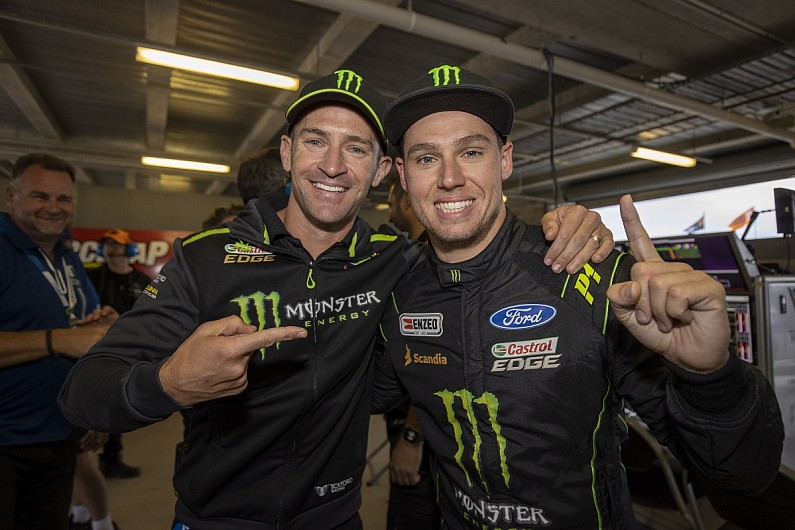 Nick Percat was the biggest mover in the Shootout, turning 10th in regular qualifying into fourth on the grid for himself and Brad Jones Racing co-driver Thomas Randle.

But his time was deleted by officials after their car failed inspection and will instead start tenth.

That promotes Van Gisbergen and Garth Tander one spot to fourth, while Holdsworth will start fifth in the car he will share with Michael Caruso.

Whincup and Craig Lowndes will start ninth after eight-time champion Whincup locked his rear tyres at The Chase.

He had been within 0.08s of then-pacesetter Mostert at the second sector, only to run wide just two corners from home.

"We underestimated the wind," he said.

"The wind changed and there was a fair tail wind down Conrod. We're normally pretty good at that, but I reckon that's what caught us out.

"I'm disappointed in myself, I feel like I let the team down a little bit today. I need to make up for it tomorrow."