The Erebus driver started the race from sixth, however there was just one driver ahead of him - Mark Winterbottom - also starting on the soft tyre.

While it was Winterbottom that initially looked the racier of the two, the Team 18 driver taking an early lead, an early safety car - courtesy of Rick Kelly tipping Jake Kostecki into the wall - changed the strategic picture.

With the entire field filing into the pitlane, Winterbottom opted to switch to hard tyres for the long run home.

De Pasquale, however, stuck with Plan A and took on fresh softs, surviving a sideswipe from Jamie Whincup to emerge at the front of the field.

From there it was a straightforward affair for the second-year star, even a second safety car 10 laps from home unable to threaten his maiden victory.

"We threw everything at it today so we're going to have a struggle tomorrow, but that's OK when you can talk about a win," said De Pasquale.

"It paid off. We had a really good car, our cars are always good around here."

He added that the win was a nice pay-off for his Erebus crew, which has been on the road for over a month since fleeing locked down Melbourne.

"My dream is racing every weekend around the country and living in hotels, but for a lot of the crew they have families at home," he said.

"So for them to be away for so long, to get wins and podiums, that's why they're involved in the sport." 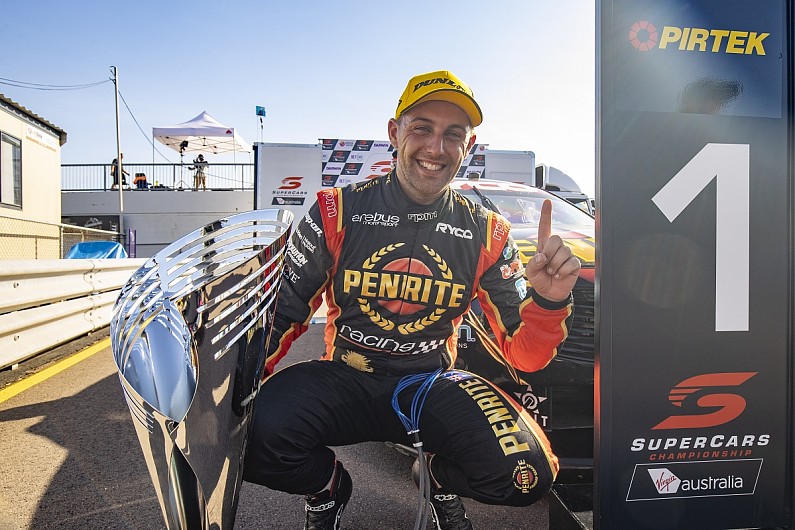 James Courtney was next in line in terms of soft/soft runners, the 2010 series champion coming home a fine second, eight-tenths behind De Pasquale.

While Whincup was third on the road, best of those only running the hards, he was slapped with a 15-second penalty for an unsafe release during the chaotic round of stops.

That dropped him down to 17th, and promoted Scott Pye, who jumped from the hards to the softs, to the bottom step of the podium.

Whincup wasn't the only big name to feel the wrath of the officials as Shane van Gisbergen was forced to serve a drivethrough penalty right after the stops, after tipping Nick Percat into an opening lap spin that also took out Todd Hazelwood. Van Gisbergen recovered to finish 11th.

Scott McLaughlin, who crossed the line eighth, was also slapped with a 15s penalty for a restart infringement during the first safety car, which left him 20th in the final classification.

Winterbottom capped off a good day for Team 18 in fourth behind team-mate Pye, while Chris Pither scored Team Sydney's best result with a soft tyre run to fifth.

Fabian Coulthard led the way for DJR Team Penske in sixth, followed home by Chaz Mostert, who charged his way from 20th on the grid to seventh.

The race was a shocker for Brad Jones Racing. After Percat and Hazelwood's lap one tangle, there was more damage for the team when Macauley Jones crashed out of the race on lap 24, triggering the second safety car period.

The silver lining was a 12th place for Jack Smith, who made a second stop during that caution for softs before making up eight spots on the run home.