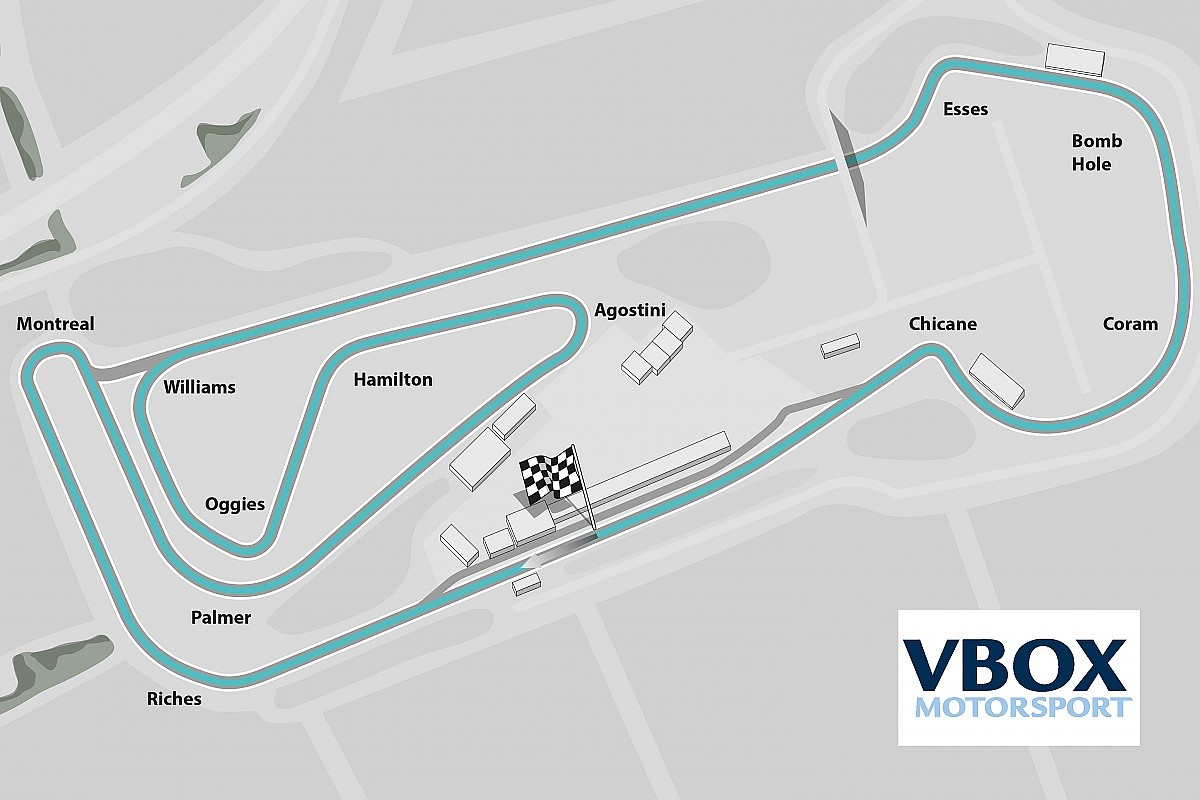 Since Snetterton underwent a major redesign for the start of the 2011 season, the Norfolk circuit has boasted one of the UK's longest layouts.

The old favourites - Riches, the Esses and the Bomb Hole - remain and the rest of the track constitutes a significant driving challenge that requires concentration and precision throughout.

In association with Racelogic, British GT champion Jonny Adam is your guide: 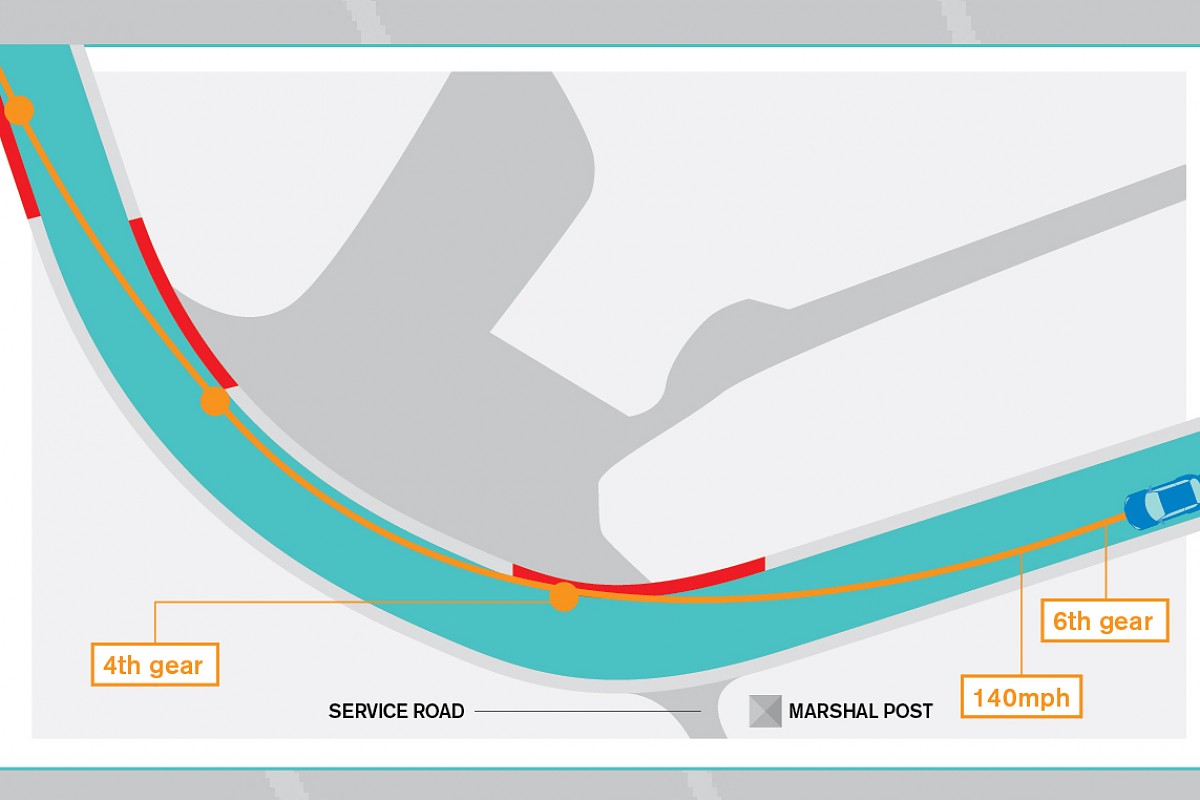 I do use boards when I'm braking but the big thing for the first corner is the solid white line that comes across the track. It's pretty much between the three and two board. A lot of people get this corner wrong because they attack the braking zone too hard. It's all about the preparation; it's getting down to the right minimum speed, then let the car roll into the right racing line.

In the dry you pretty much go straight for the first kerb in effect. What that does is just put a bit of rotation into the rear of the car and allows you to get the lock off because if you miss that first kerb you've got a lot of steering lock on all the way through the corner, which will affect your exit and offer an overtaking opportunity for whoever is behind. So it's important not to attack the braking zone too much but at the same time carry the minimum through.

A lot of people are shocked by the amount of camber that's there at this corner. I work with the two and one board for the braking reference. In a car with ABS, smash the pedal as hard as you can and you're braking all the way into the apex - especially with the front-engined GT car where you're trying to get as much weight to the front as you can.

A lot of people get the exit wrong because they're not patient enough at the apex and they get big understeer by jumping on the power at the wrong time, or huge oversteer and nearly spin.

Overtaking hotspot: It's the best overtaking point on the whole circuit and it stems back to Riches: get a clean run through and make a last-minute manoeuvre down the inside, catching out whoever is in front.

There's no real braking reference for this so it's more of a feel thing. You direct the nose in really early and carry a lot of minimum speed through. With the aero on GT cars you can really load the car up in third gear. It's not an overtaking point, you can cover your line quite early on, but the exit is quite important because that leads down to Agostini. 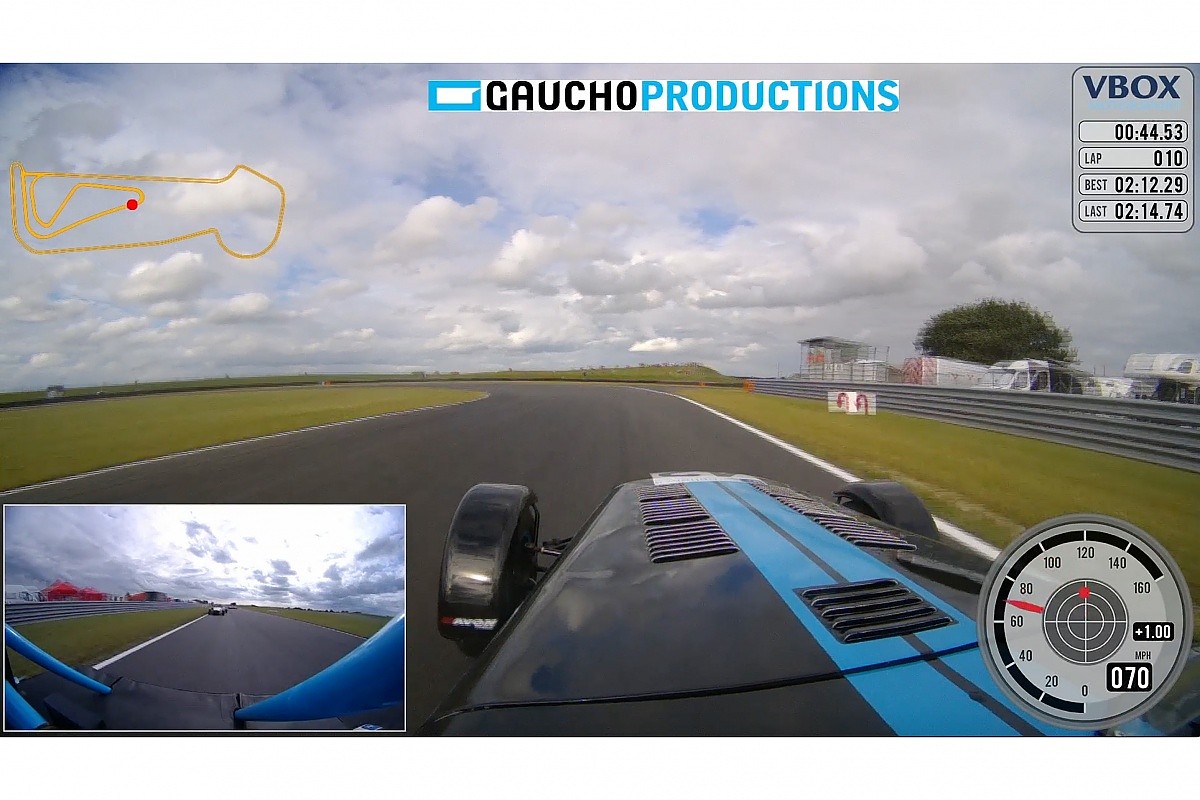 For us we try not to smash the pedal as hard as we do at Montreal, we bleed in to a high brake pressure and then squeeze the pedal a lot harder. If you get it wrong there is run-off so there is an extra bit of tarmac to run on. It's great for spectators there, because there are overtaking opportunities.

Coming out of Agostini again traction is really important. There's been a new surface, it was relaid a few years ago, and traction is good there, even in the wet.

It's a tricky left-hand corner, really tricky because you're trying not to hit the tyre stack with your wing mirror because you want to get as much left-hand kerb as you can to then carry the minimum through. As much as the minimum speed is important it's so easy to overdrive the corner and carry too much speed in.

The next thing you know you run wide onto the exit kerb and the guy behind you has the run and again you've opened up an overtaking point for the next corner.

This is a horrible stop-start right-hand corner, it's easy to carry too much in and get knackered on the way out. It's a second-gear corner on good tyres for us. There is a nasty lip when you go in and a lot of the time if you hit the bump under heavy brake pressure the fronts will lock and you'll go too deep into the corner so it's important to understand that and to modulate the brake pressure.

The next corner is crucial to get onto the back straight. You've got a track-limit pressure pad on the exit, so you want to use all of the track but not a foot more because you do get penalised for that. Then you obviously open her up all the way down the back straight. 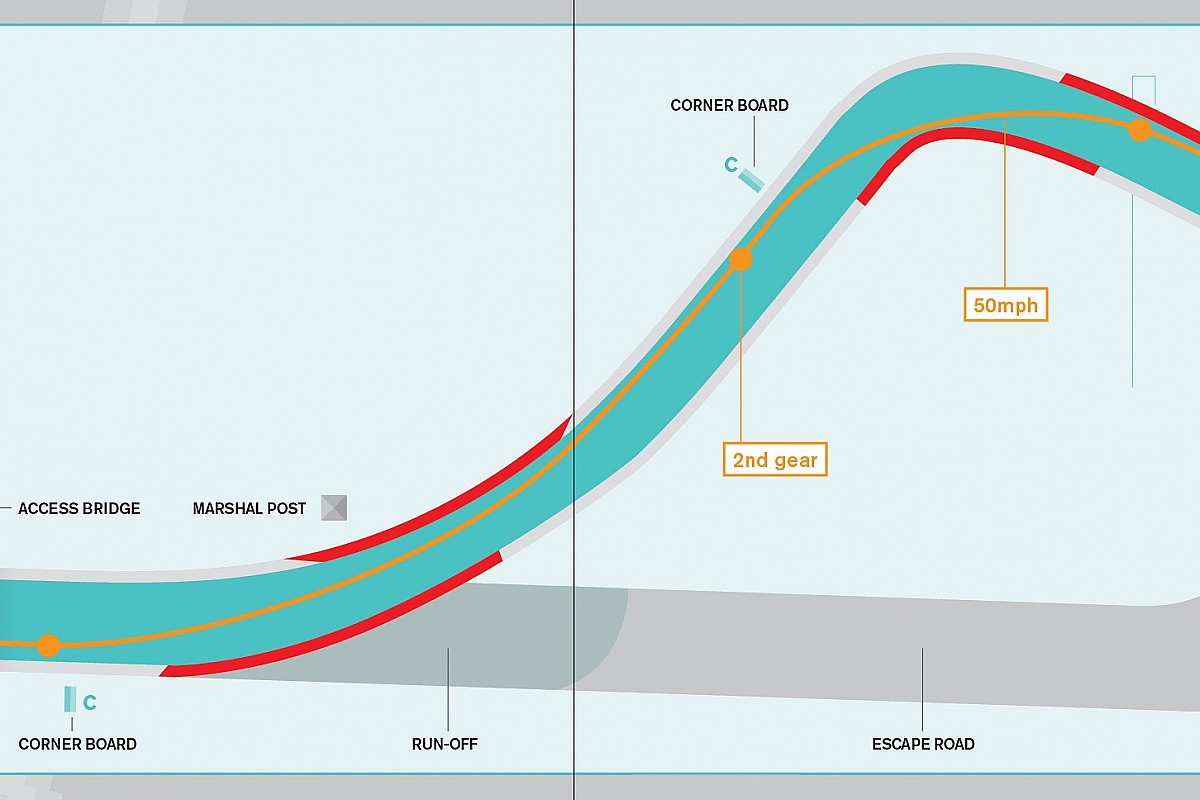 Hold your breath as you go into the Esses. You're braking pretty much at the marshal post on the service road on the right-hand side as a reference. For us it's great because we have ABS, but in a front-wheel drive Clio its tricky because you're braking and trying to carry the minimum speed; if you get it wrong you get massive oversteer.

There's a lot of camber again - in the dry you can mount that left-hand kerb, in the wet you miss it. For the right, I've seen people so often carry so much speed into the Esses. They look like a hero on the data but a villain on the way out because they've carried so much speed in and don't get the exit right. Again, there is a track-limit pressure pad on the exit.

The only problem is there is one line, so if you get off line and try to reposition the car, there's dust on the dry line, there's rubber on the racing line, and then there's obviously the non-racing line. I've seen people attempt that move, lose the rear and spin into somebody. 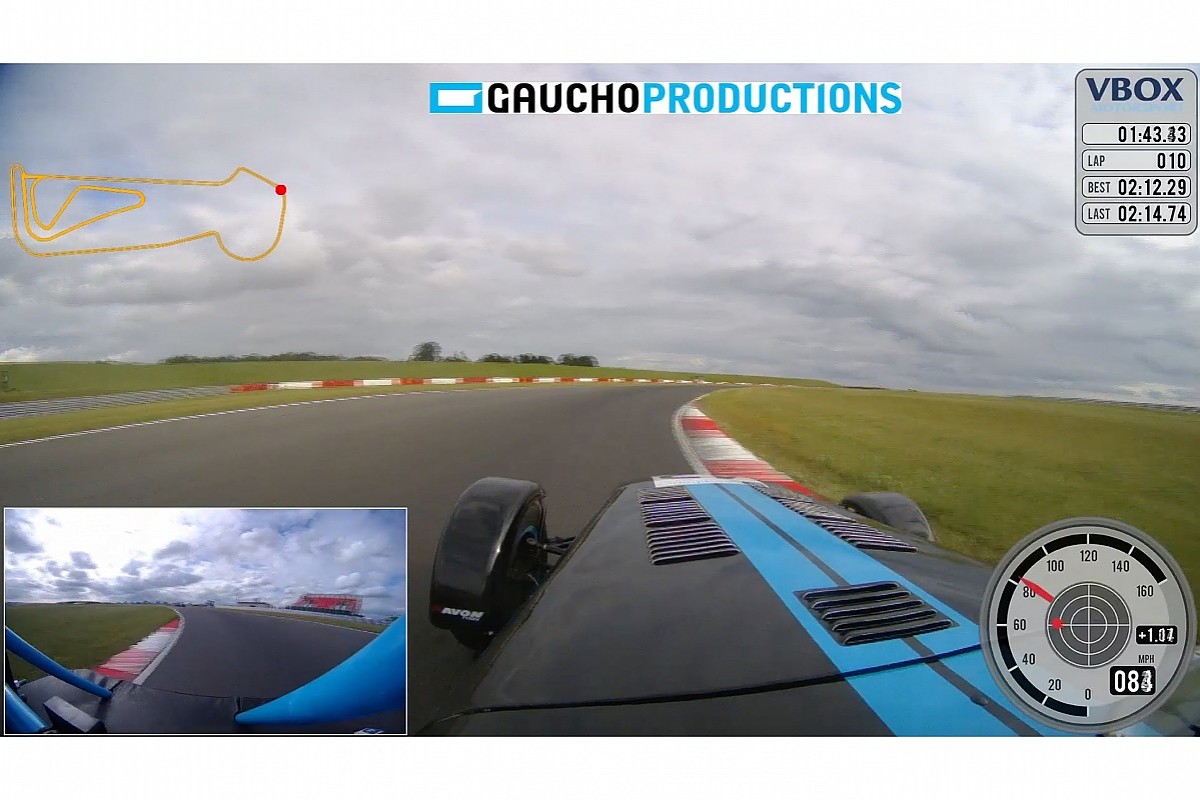 In a GT car it's a lift, just to keep the nose of the car in. There's a drain cover to aim for as a reference. You literally see that drain cover and drive over it. It's changed since the track was resurfaced, and the camber isn't as severe as it used to be, but it's still there and it's all about getting the exit out of Bomb Hole. You can actually carry good speed in but if you carry too much in you pop out of the compression too quickly so it's all about lifting in the correct position to get the exit. The circuit has done a great job improving the drainage so the wet line doesn't really alter much at all through the Esses or the Bomb Hole.

Coram is one of these corners where you can make or lose so much time. At the entry you carry as much speed as you physically can - you want to carry so much in that you're just in a high-speed-understeer state all the way through. You're causing the front-left tyre to squeal, but it's purely because we're loading up the front tyre so much all the way through there. In the wet you do have to watch out for all the standing water on the way into Coram, so you do have to pick your line carefully. 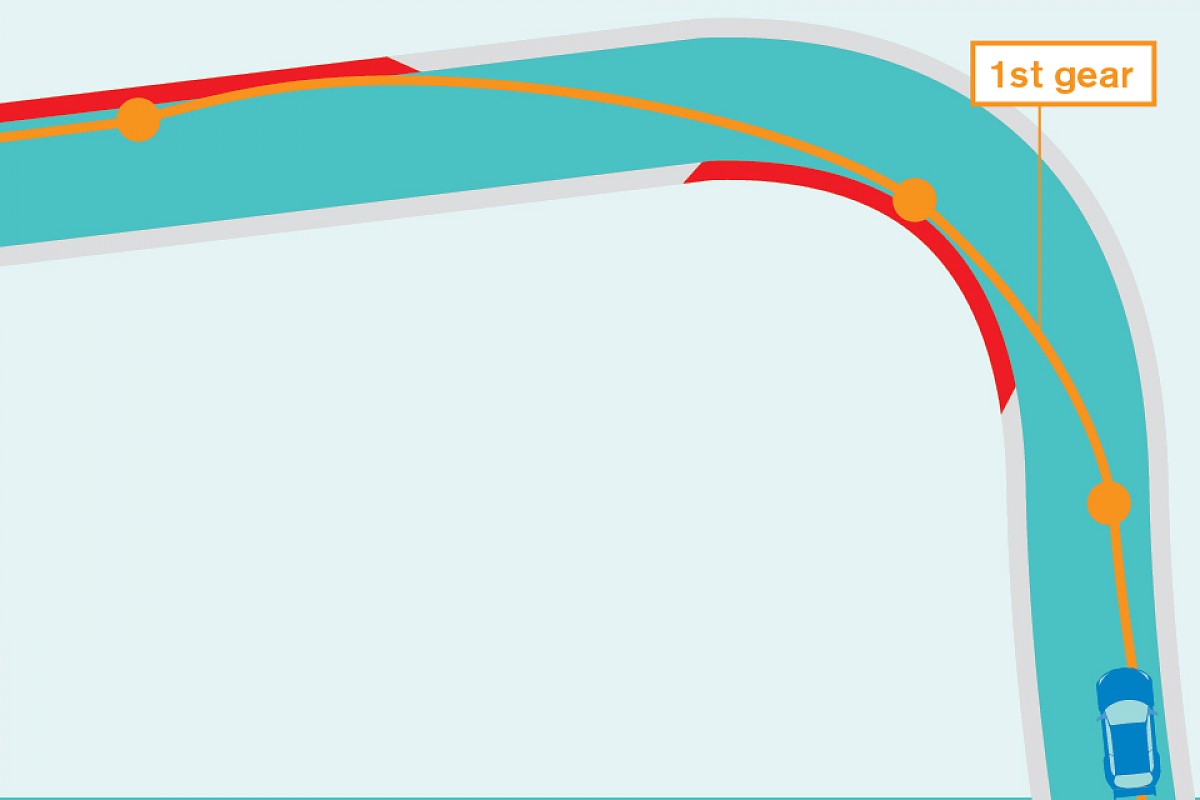 After Coram, the chicane is all about positioning. It's so important to get the car positioned for the left because you're so fast into it you may lose a lot of time coming out because you've nearly run off the road. There's a lot of understeer in the car, so you have to be patient in that second phase of the braking point. Then it's back onto the start-finish straight, hugging the wall as tight as you can, trimming as much off the track as possible.

Overtaking trouble spot: For most of the lap it's hard to overtake and the chicane is not an overtaking point. You can catch people who are sleeping going deep to get the exit, but it's a risky manoeuvre because if they don't see you it could be wheel-to-wheel contact and the end of your race.

The right lines and references are a great starting point, but the way to make the biggest gains is self-analysis. This is where proper video and data scrutiny comes in - and where Racelogic excels.

Below is a hotlap of Snetterton 300 using Racelogic's VBOX. A host of supportive documents, guides and footage can be found on the Racelogic website here.