Aston Martin Racing Academy driver Alex Toth-Jones is confident he and Academy Motorsport will be towards the front "very soon", after a baptism of fire at the opening round of the British GT season last weekend.

Alongside team-mate Will Moore, the pair raced one of Aston Martin's new V8 Vantage GT4s at Oulton Park.

High temperatures during the meeting meant it was difficult for drivers to get on top of set-ups for the two one-hour races on Bank Holiday Monday.

"All of Friday testing we were just trying to adapt to the temperature as all the pre-season testing we had done was in the cold, so it was 20 degrees higher than that and it changed the car massively," said Toth-Jones.

"We showed the same pace as the rest of the other Astons and I could have got a little bit more out of qualifying, it's tough to try and switch the tyre on in that one lap. I learnt a lot from it though."

After qualifying eighth in the GT4 class and the second-best placed Aston Martin for race one, Toth-Jones started the race and was running well until being forced wide at Old Hall dropped him down the GT4 order.

After handing the car over to Moore, the Silver-Silver pairing finished 10th in class in the first of the two races.

Toth-Jones was unable to get back in the car for the second race, though, after Moore slid off at Cascades after contact with another car.

"We came away with minimal damage and a finish, that's more than some people can say about their weekend," said Toth-Jones.

"We got the most out of the weekend we could and it just makes us a little bit more hungry for Snetterton." 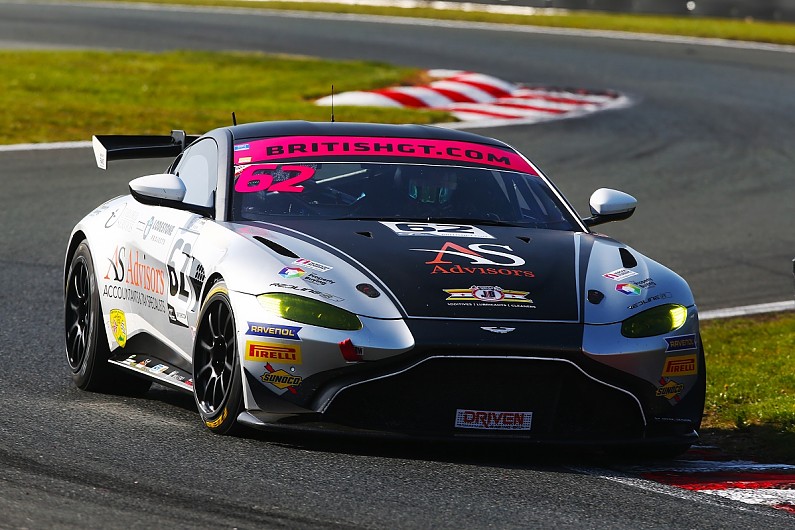 The next round of the championship will take place at Snetterton on 18/19 May, and is a track Toth-Jones is confident the team can bounce back at.

He also believes the support from Aston Martin will mean that the team can get on top of the car sooner rather than later.

Toth-Jones was one of 23 drivers who was selected by the famous marque last month for its Aston Martin Racing Driver Academy.

Following in the footsteps of Ross Gunn, one of the drivers will be offered a factory contract at the end of the season.
"I think Snetterton is a circuit we enjoyed in testing, it's a circuit I like and we were quick in testing." he said.

"Over the Oulton Park race weekend the support from Aston Martin Racing has been really impressive.

"You have questions that you can only ask someone who has been and done it.

"Aston want the cars to do the best job and if something isn't right they will sort it.

"I have no doubt that we will be there very soon."