Alex Dunne certainly knows how to make an impact. The Irishman has impressed ever since he swapped karts for cars at the start of last year, brilliantly taking pole for his very first race in Spanish Formula 4 at Spa. And that continued when Dunne progressed into British F4 this season, securing two wins and a second at the Donington Park opener despite his participation only being officially confirmed days beforehand.

“The move from karts to cars can be quite a difficult one but I think my debut was pretty strong for the limited amount of testing I had done,” Dunne says, modestly. “To put it on pole and take a podium, I think I adapted to it quite quickly! I did a lot of simulator work and was quite confident in the car.”

That confidence has been evident again this year, and that’s perhaps no surprise given the 16-year-old has been surrounded by motorsport all his life, since his father Noel was a successful Formula Ford racer.

“Being around motorsport from such a young age, I always understood it,” says Dunne. “I was always watching it and always had an idea that was what I wanted to do.”

Getting behind the wheel of a kart for the first time confirmed that he wanted to follow in his father’s footsteps, and Dunne has not looked back. But things did not go quite as planned after that promising Spanish F4 debut in 2021. He failed to score another podium over the first three events, split with Pinnacle Motorsport and was forced onto the sidelines.

That was until a deal was struck with Ralf Schumacher’s US Racing squad for three German F4 rounds, during which Dunne took a further two podiums at Hockenheim. Dunne was then offered the chance to get to grips with the new second-generation Tatuus F4 car with an entry in the winter UAE series with Hitech GP. 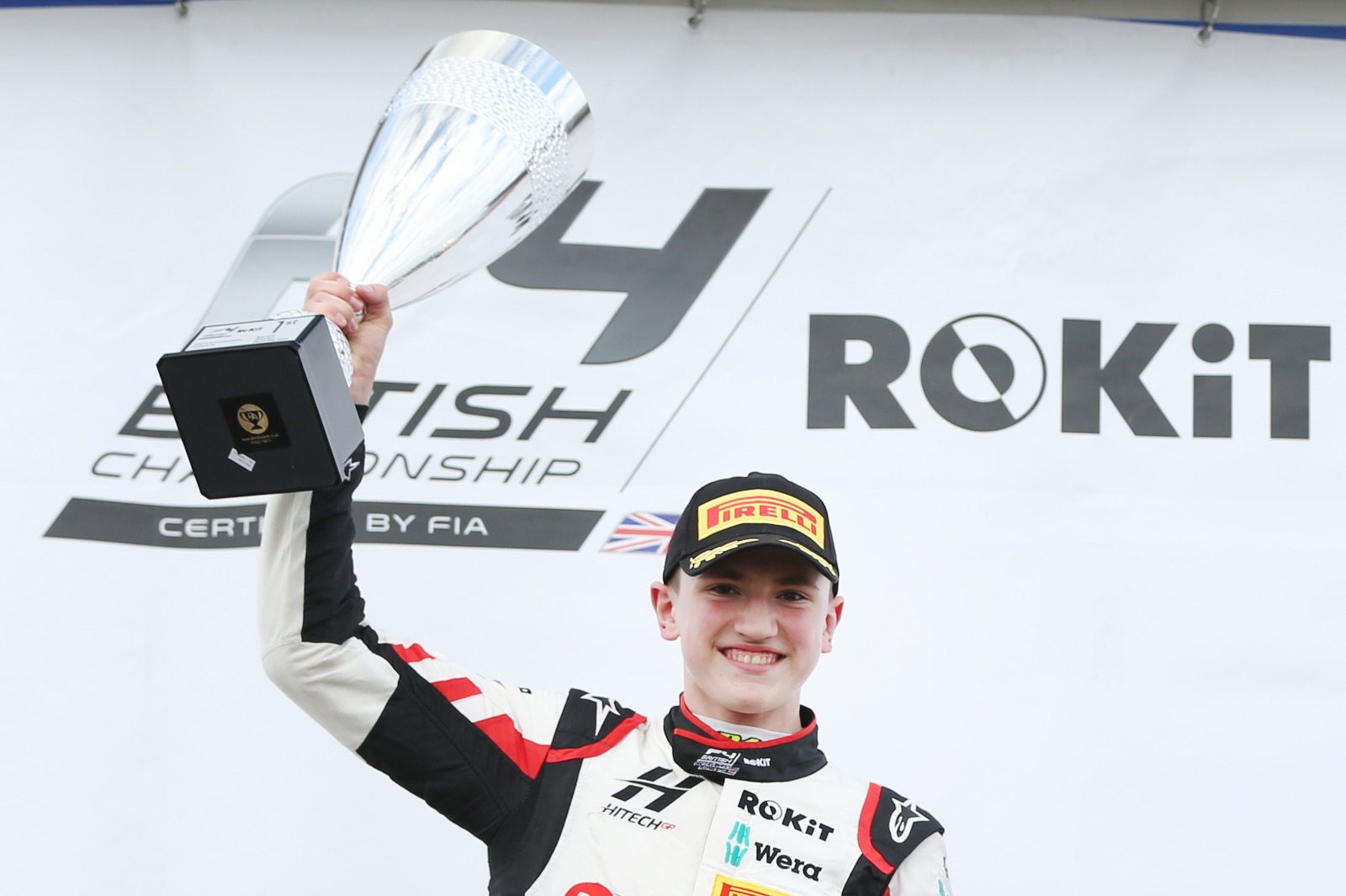 “We did the few weeks in the UAE after we got a call from Oliver Oakes [team boss] asking if we wanted to come with Hitech and it was not an opportunity we could turn down!” recalls Dunne. “It was a really good opportunity for myself to learn a lot about the new car.”

And considering the latest Tatuus-Abarth machine is fundamentally different to its predecessor, it was a particularly useful experience for Dunne.

“You have more horsepower and a halo so the centre of gravity is a lot different,” he explains. “It’s a much heavier car and the driving style is quite different.”

Ominously for his rivals, Dunne could be even further ahead in the British battle had he not suffered from gearbox problems at Brands Hatch and a down-on-power engine at Croft

That relationship with Hitech then continued, with Dunne signing for the team in British F4 alongside his existing commitment to Italian F4 with US Racing. The extra seat time from the dual campaign has been a benefit for Dunne, especially since many of his rivals in Italy also contest the German series.

And Dunne has been putting that time in the car to good use, impressing in both series. He has undoubtedly been the driver to beat in British F4 and, heading into the seventh event at Snetterton this weekend, leads by a healthy 41 points with seven victories – the next-highest tally is just two.

He is also third in the Italian standings, the only driver not from the all-conquering Prema squad in the top five. But there is a clash between the Brands Hatch British finale and the penultimate Italian round at Monza, with Dunne saying he will decide which one to prioritise nearer the time.

Ominously for his rivals, Dunne could be even further ahead in the British battle had he not suffered from gearbox problems at Brands Hatch and a down-on-power engine at Croft. He also stalled in the most recent race at Knockhill, and then suffered damage when trying to fight back through the pack. 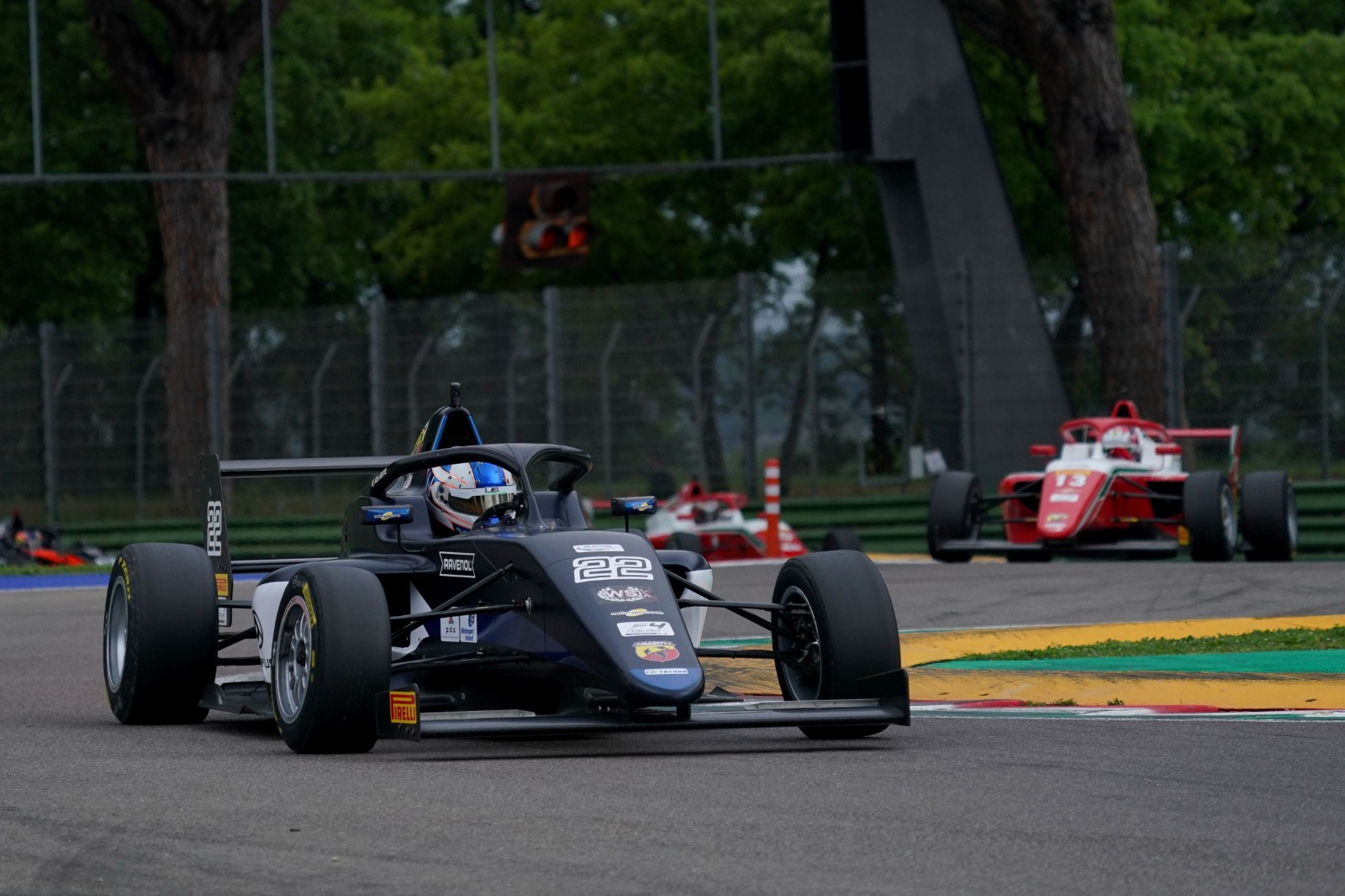 Dunne has also impressed in Italian F4, although a clash will mean he has to decide which championship to complete

“Unfortunately, that’s probably one of my weaker points,” admits Dunne of his launches. “Because of the procedure, it’s really tricky to be able to do it right. We’ll just have to do a lot more practice starts to try and get my head around it!”

One person who has not been surprised by how Dunne has performed so far this year is his father, and Dunne Sr has really noticed the difference in his son’s maturity.

“The way he goes through data and feedback and the way he listens with the engineers, I’m very impressed by that,” he says.

After all, Dunne Sr knows what it takes to win races. His most notable achievement was triumphing in the Kent Formula Ford Festival in 2006, but he has not raced since 2014. He says his son’s career path has certainly been very different to his own.

“I didn’t drive my first car until I was 21,” he explains. “I did it all myself and had a few offers to go to America but I didn’t understand the way the whole industry worked.

“Since Alex has been racing, I’m doing everything for Alex and making sure all the deals are done. I get more enjoyment out of watching Alex than I did racing myself. I get a good kick out of watching him and seeing him progress and becoming the complete package.”

But has he been tempted to make a comeback himself?

“A lot of people have been asking me [about a return], but not at the moment!” he says, adding that a combination of work and supporting Alex’s racing is a “24/7” undertaking – he was even his son’s mechanic when he started out in Spanish F4 last year. 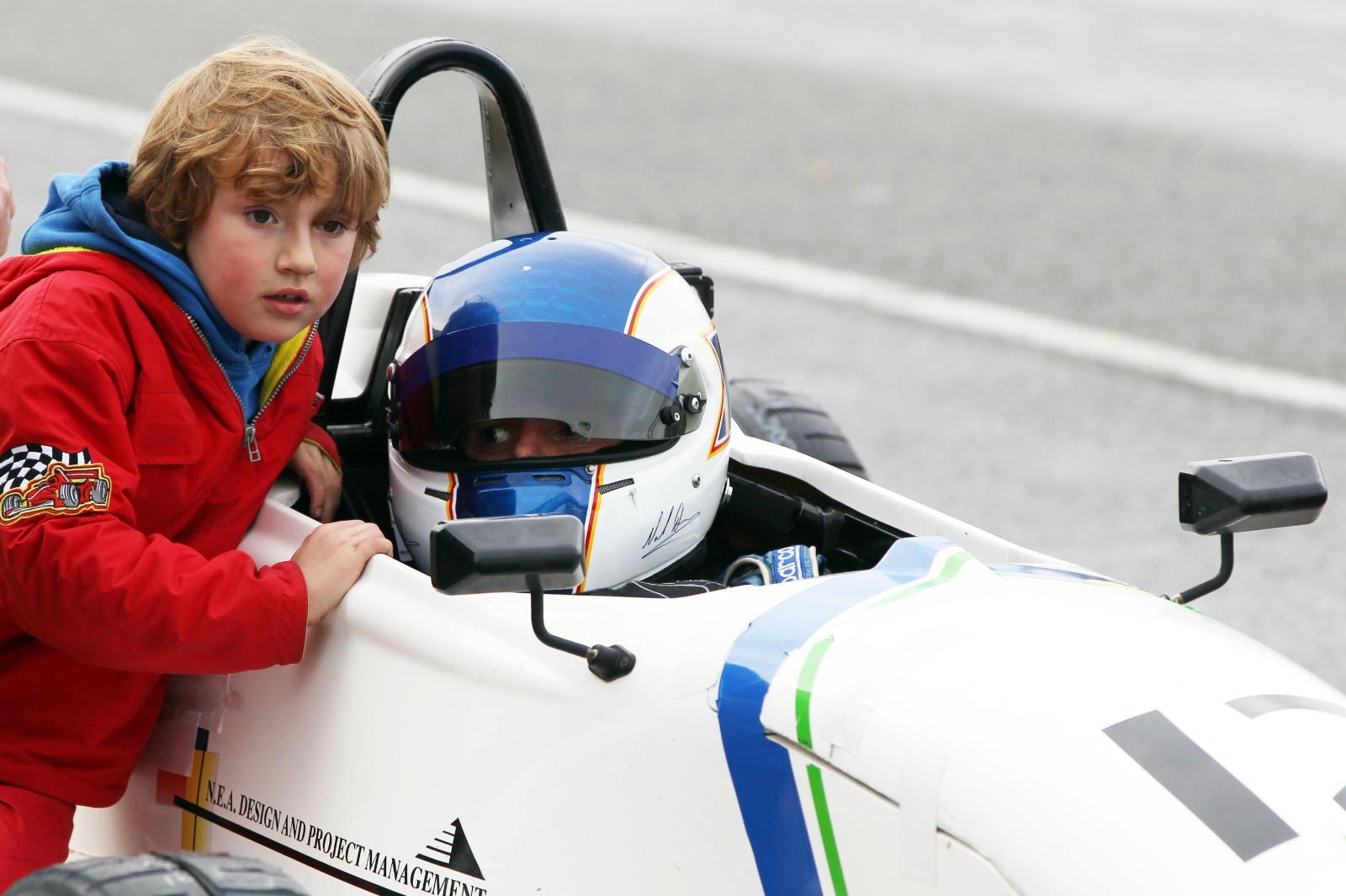 Dunne has grown up in racing, pictured here with his father Noel at the 2013 Walter Hayes Trophy

Unsurprisingly, given his impressive results, Dunne Jr has been attracting plenty of admirers and offers for the future.

“I’m Alex’s biggest fan so I always expected him to be at the front,” his father continues. “But I’m also his biggest critic and, if something goes wrong, if he makes a mistake, I’m the first one to tell him.”

And that’s enough to keep Dunne Jr on his toes as he attempts to score more impressive results in the second half of this season. 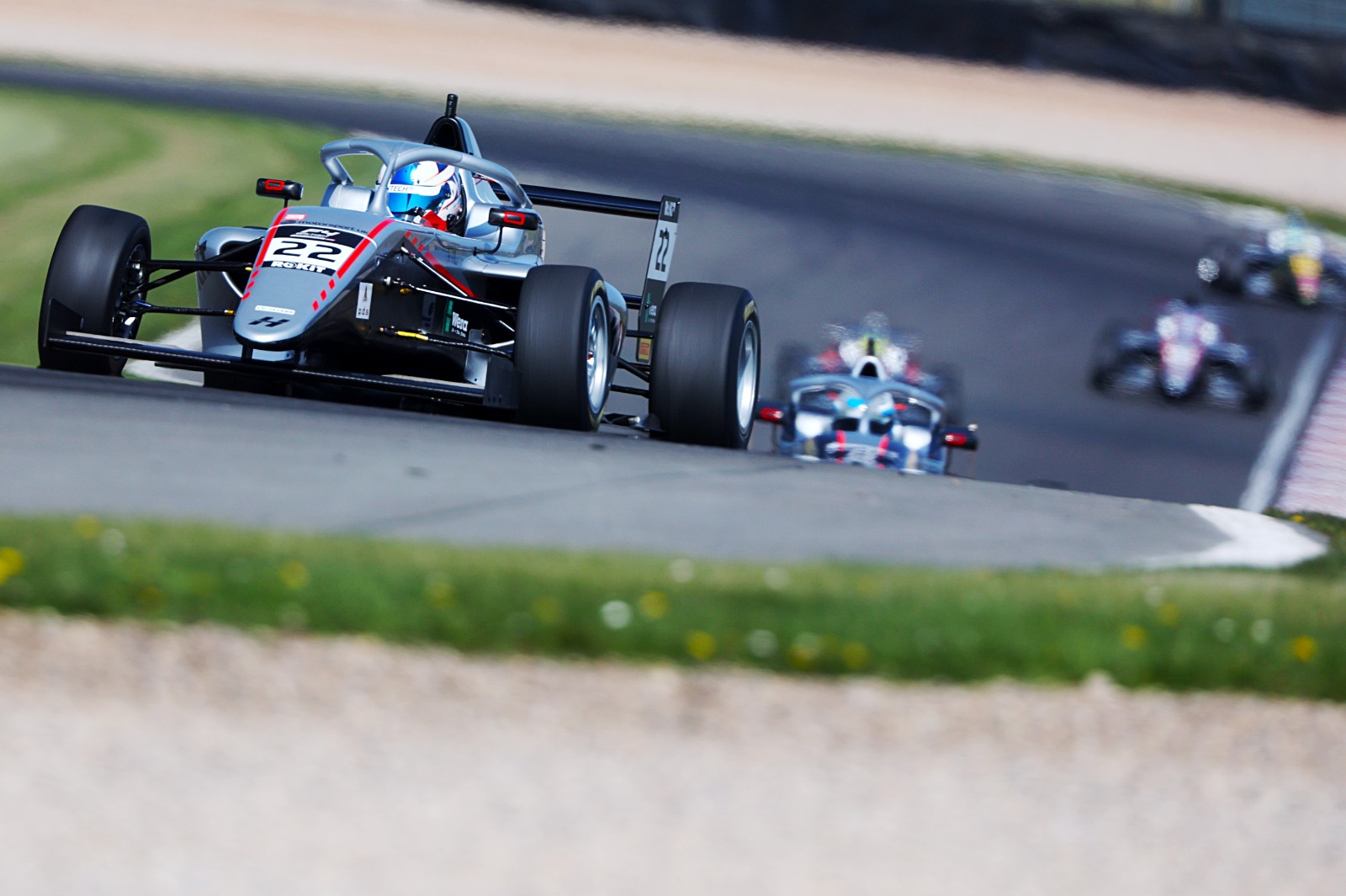 Against stiff competition from F1 juniors such as Oliver Gray and Ugo Ugochukwu, Dunne knows he can't afford to relax